Academic conference: “Does a European neighbourhood in crisis affect our fundamental values?’

Academic conference: “Does a European neighbourhood in crisis affect our fundamental values?’ 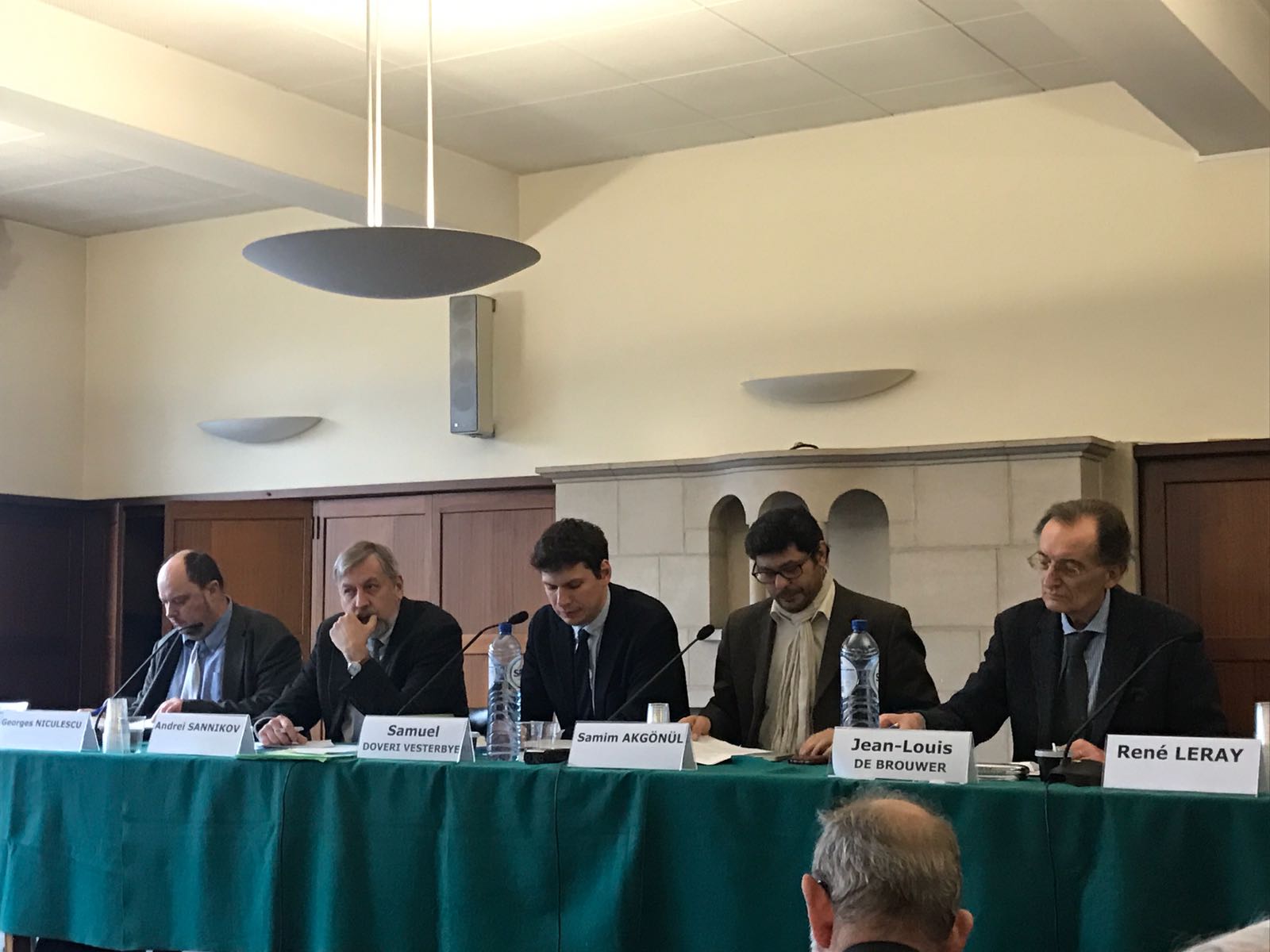 The European Neighbourhood Council (ENC) held a full-day academic conference with academics and senior policy makers on the 8th of February 2017.

The event was a collaboration between ENC and the Institute for European Studies (IEE) at the University of Saint Louis in Brussels with support from La Vigie, European Centre for Electoral Support (ECES), Royal Institute for International Relations (Egmont), and the Order of Malta in France.

The main objective of the three-panel conference was to foster a new and open scholarly exchange of ideas on values and European foreign policy in the immediate neighbourhood.

To promote new academic concepts and narratives, the conference put together a diverse selection of historians, sociologists, political scientists and security experts in various areas to discuss remedies and solutions for upholding European values throughout the shared neighbourhood area covering countries like the Ukraine, Belarus, Turkey and Libya.

The third panel consisted of Bernard Philippe, formerly at the European External Action Service, Dr. Elisabeth van Rijckevorsel, Researcher at the Catholic University of Leuven, Victor Fevre, Researcher at La Vigie and Bernard de Gerlache De Gomery, previous President of the Belgo-African Chamber of Commerce and the current Vice-President of the Order of Malta.

The closing panel consisted of Monica Frassoni, the Co-President of the European Greens (Party) and Lorenzo Consoli, former President of the Brussels International Press Association and lecturer at IHECS.

Each panel was introduced and moderated by Jacques Keller-Noellet, Honorary Director General of the Council of the European Union, Samuel Doveri Vesterbye, Director of the European Neighbourhood Council and Prof. Eva Saenz-Diez Jaccarini, Professor at the Catholic University of Leuven.

In theory: using history and our cultural fabric to shape European domestic and foreign policy.

The first and third panel took a socio-cultural and historical approach in dealing with the topic of values in Europe, and how they shape foreign policy. This was deemed necessary in order to find answers to the issues related to current tendencies of European identity crisis and the value-versus-realism discourse.

Professor Francfort noted that it was very important to differentiate between universal moral values and values only related to European cultural heritage.

In an effort to explain how various strands of social fabric and culture have collectively led to our common understanding of ‘Europe’, he went through a selection of cultural artefacts, literature, history and music which have come to represent certain values.

For example, the Byzantine Empire, Charlemagne and Celine were part of European identity, but were often used by different European groups for very different political purposes, ranging from nationalism to socialism.

On a separate note, Philippe acknowledged the importance of Abrahamic concepts in shaping European identity and values, with a strong reference to Hanna Arendt.

With a re-evaluation of values across Europe, the re-studying of cultural backgrounds for new narratives and cultural identities could become increasingly important, including in areas of foreign policy.

Prof. RenÃ© Leray, Professor at the University of Saint Louis, further explained that the current ‘crisis of values’ in Europe could likely also be a product of neighbouring regions, which are moving towards more authoritarianism and illiberal ideas, while indirectly influencing core-European values.

Rijckevorsel added that the EU’s ‘treaty weapons’ to protect itself against a crisis value in domestic and foreign policy include the concept of supranational politics, mutual recognition of legal systems and practices, and the respect for refugees.

According to Prof. Franck, the multilateral and soft-power approach of Europe appeared to have worked sub-optimally, whereas the EU interests continue to be ill defined in texts.

Whereas Prof. Francfort added cultural and historical insights into the possible ‘glue’ that can hold together a new European narrative and foreign policy, Galland added a more static image of the situation across the EU.

According to Galland’s quantitative study, Europe can be categorised into various value groups that heavily impact the way in which we think about foreign policy and act on questions of authority, integration, autonomy and individualism.

This would explain the diverse and at times vague foreign policy concepts put forward by the EU, as they represent very diverse value perceptions, reflecting various interests and norms across member countries, as Prof. Franck explained.

In practice: success or failure in foreign policy across Europe’s neighbourhood? 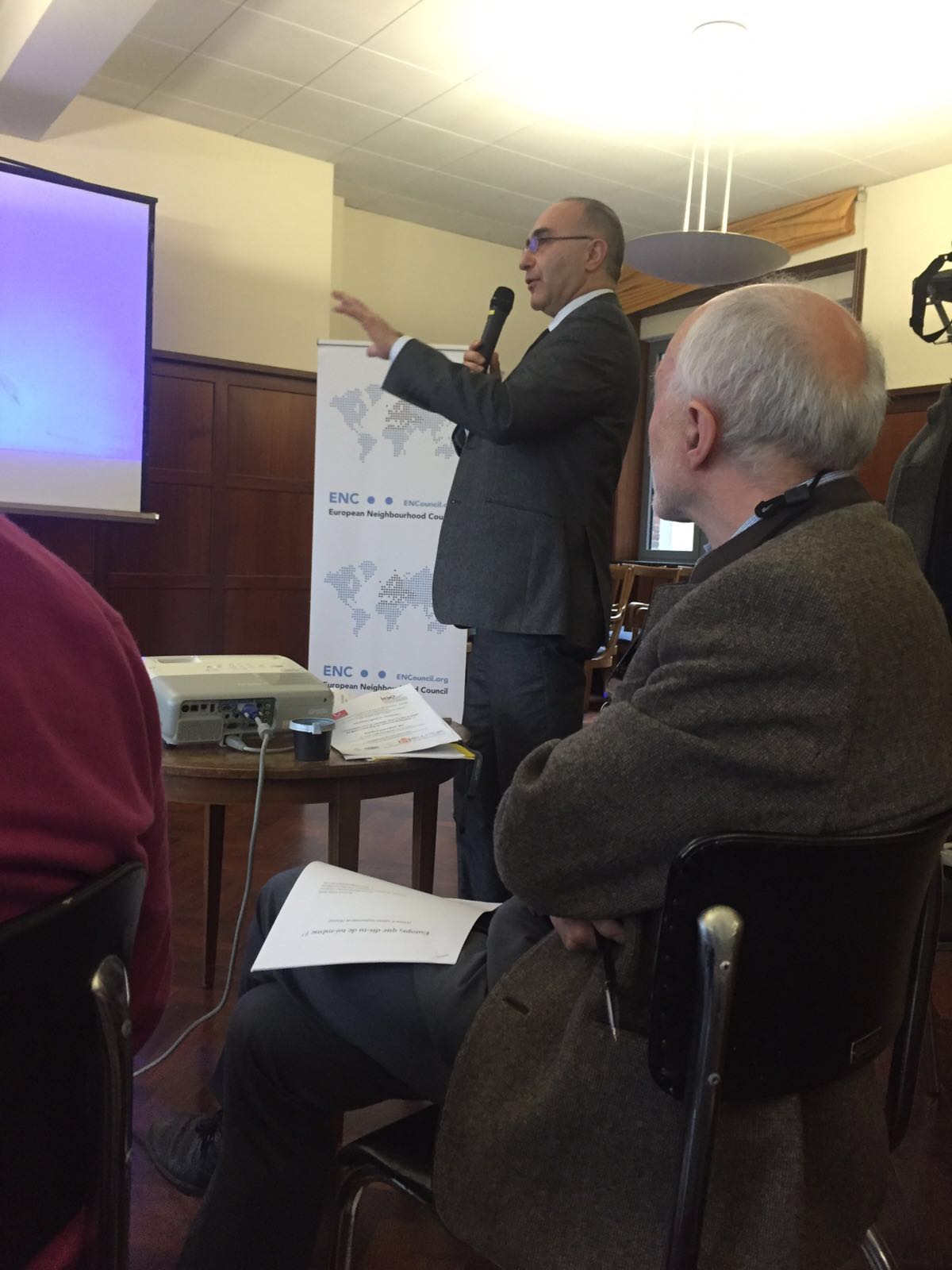 The second panel discussed the growing division in foreign policy between the real-politik and value-based school of thought by looking at real examples in Turkey, Ukraine, Belarus, Russia and also covering thematic elements like the infamous ‘Refugee deal’.

According to Prof. Akgonul, the EU still has soft-power leverage over Turkey, but appears to have stopped using the ‘carrot and stick approach’ in recent years.

On the topic of Russia and the Ukraine, Niculescu argued that there were four scenarios to study closely, including creating a buffer zone area which is supported by Henry Kissinger; a general decline of the West; an interim alliance with the Baltic states and Poland against Russia; or regional chaos with a high probability of proxy and direct war in countries like the Ukraine.

Most importantly, he added that the EU should prioritise how it wishes to shape policy in its Eastern Neighbourhood in terms of whether it decides to defend values, roll back or find a compromise over countries like the Ukraine.

According to Sannikov, authoritarian regimes in Eastern Europe usually face economic difficulties due to protectionism, which – in turn – means that the EU has much more ‘sticks and carrots’ at its disposition due to its economic status.

Finally, on the topic of migration and foreign policy, de Brouwer added that – despite criticism over the refugee crisis – the EU’s humanitarian aid remains the top donor in the world.

More importantly, the EU chooses not to work with governments to avoid ethical issues, while instead operating solely with the United Nations, non-governmental organisations and the Red Cross when it comes to refugee and migration aid distribution.