With less than a month to go before the High Representative/Vice-President Federica Mogherini and the Commissioner in charge of International cooperation and Development Neven Mimica present formally the new EU Strategy on Central Asia at the 15th EU-Central Asia Ministerial meeting, which will take place on 7 July in the capital of the Kyrgyz Republic, Bishkek, and the new Strategy picks up momentum in the EU’s capital.

The first week of June in Brussels can easily be labeled a “Central Asia Week”. Several non-governmental organisations and institutions joined forces and provided a week full of high level events, trainings and meetings for those following the developments in the landlocked region.

The European Neighbourhood Council (ENC) in close cooperation with its long-lasting partner Europe-Central Asia Monitoring (EUCAM) and Internews in Central Asia carried out a one-week training programme for two different groups of fellows coming from the region.

ENC throughout 2018-19 supported EUCAM and their fellowship programme by hosting and training so far three groups of young Central Asian fellows in policy-oriented research and outreach in Brussels and it will continue to do so in 2019-20  as well. The third group focused on security and gender, border management, security sector reform and enclave issues in the region.

More recently ENC established partnership with the only EU-funded regional project on Preventing Violent Extremism (PVE) in Central Asia “Contributing to stability and peace in Central Asia through media literacy, improved reporting and regional cooperation” which is implemented by Internews.  The project is focused on national and regional efforts to prevent radicalisation in Central Asia through increasing the capacity of journalists, teachers, civic activists and media professionals (through training activities, workshops both on national and regional level, and innovation laboratories) in the production of high-quality media content and raising the level of critical media consumption of representatives of civil society, decision-makers and ordinary public. As part of the project, Internews provided PVE fellowships to five young media professionals from Central Asia who were hosted in Brussels by ENC in order to participate in other international forums and conferences on PVE and to get acquainted with international experts and journalists with experience on reporting PVE-related stories. 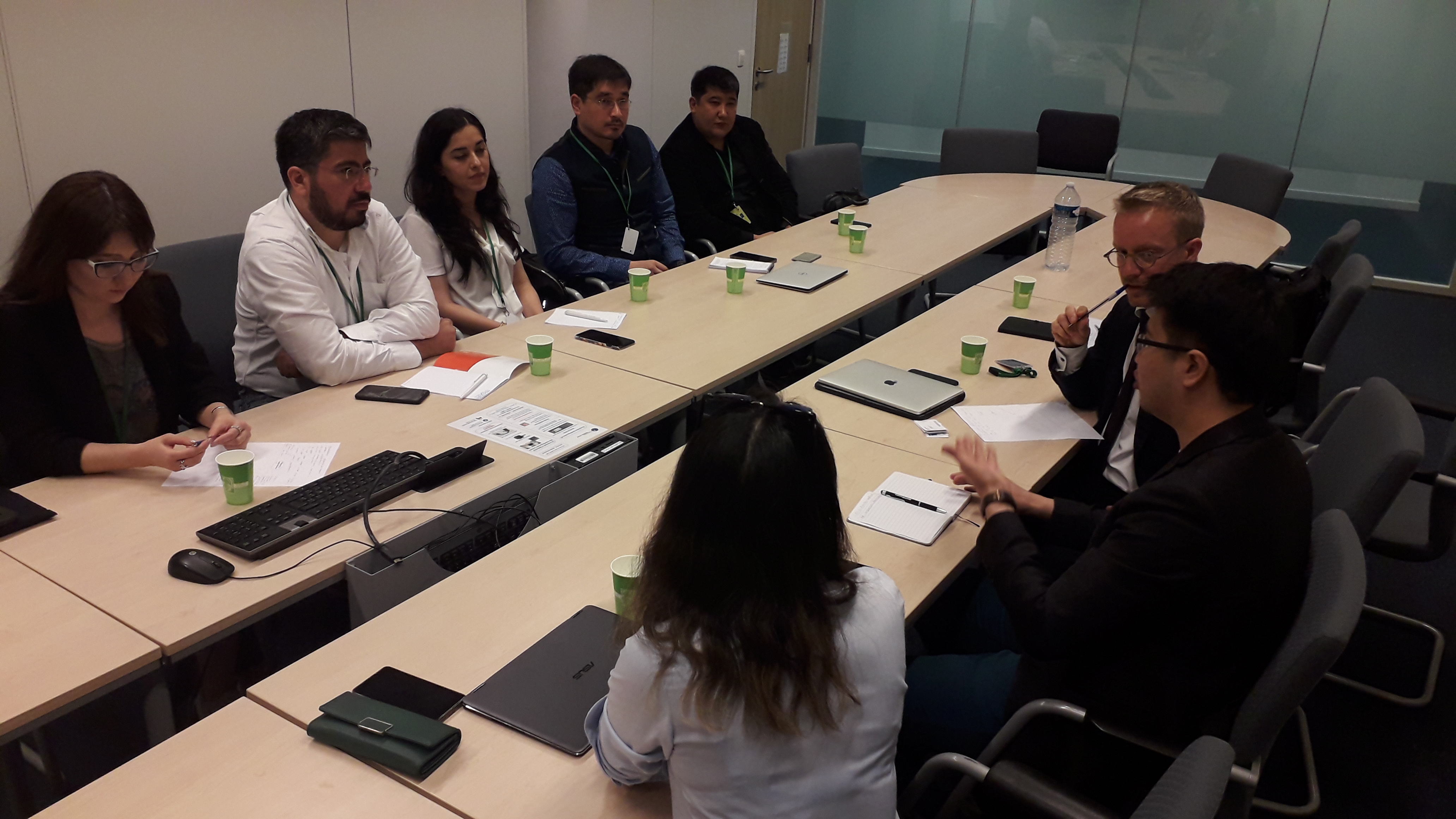 The Internews fellows had the chance to interact with members of the East StratCom Task Force at the European External Action Service (EEAS) and learnt about EU’s efforts and objectives concerning strategic communications in other regions, in this case in its Eastern neighbourhood. 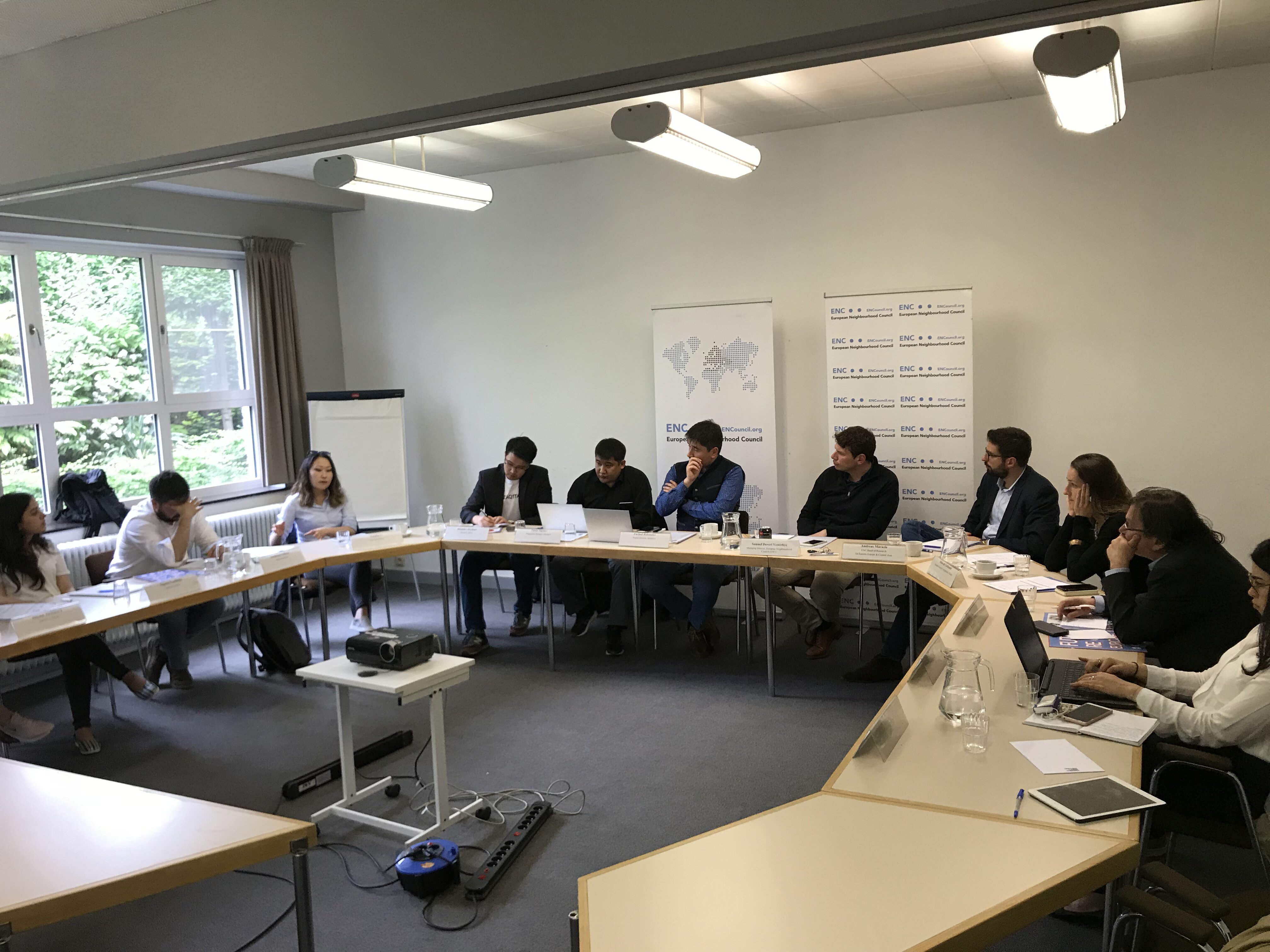 The fellows also interacted with EU-based journalists such as Alissa de Carbonnel, security correspondent at Reuters and Georgi Gotev,  senior editor at EURACTIV in an interactive workshop focused on exchanging better practises in reporting PVE stories in Europe and other regions. Special attention was given to the ethics guidelines and the role of ethics officer in media outlets. 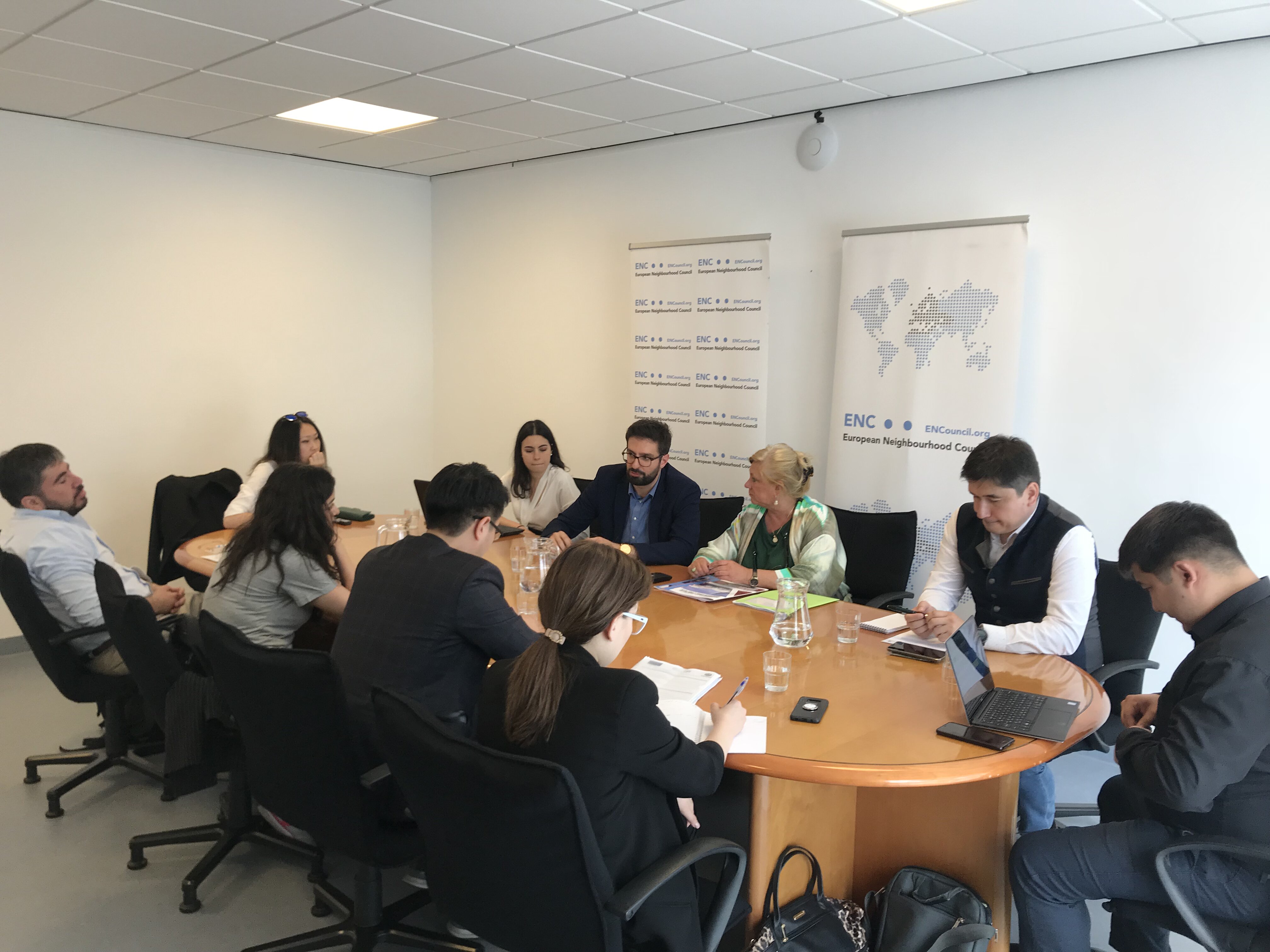 Special attention was given in the exchange of information with the Radicalisation Awareness Network (RAN) a network of frontline or grassroots practitioners from around Europe who work daily with people who have already been radicalised, or who are vulnerable to radicalisation. Practitioners include police and prison authorities, but also those who are not traditionally involved in counter-terrorism activities, such as teachers, youth workers, civil society representatives, local authorities representatives and healthcare professionals. Ms. Karin Heremans, a member of the workgroup on Islam and muslims in Belgium for the King Baudouin foundation and co-chair of RAN, discussed with the Internews fellows about the various pedagogical practises that RAN is utilising in order to de-radicalise youth in Belgium and elsewhere in Europe. 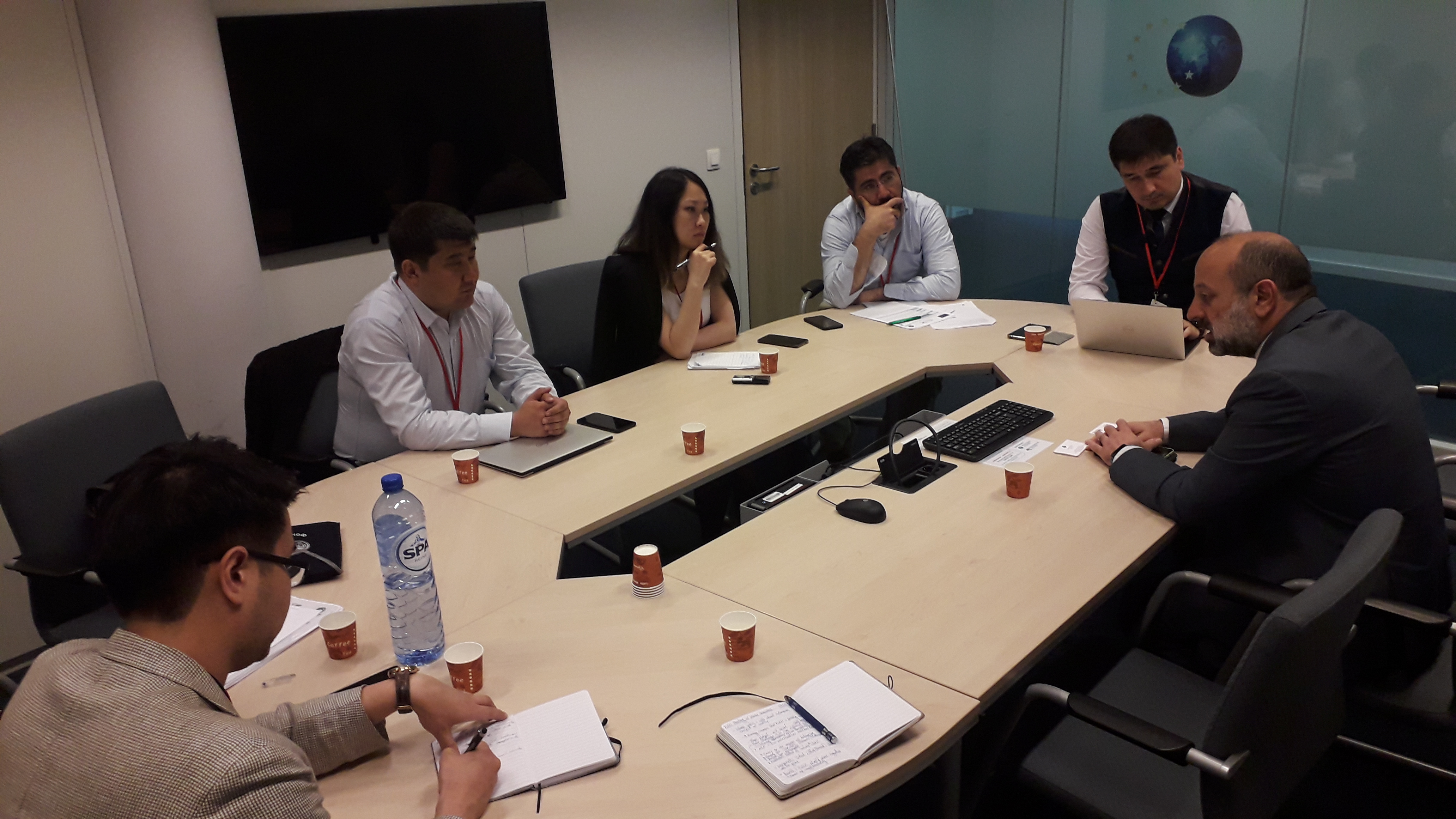 Interesting discussion was held at the EEAS among the Internews group and John Gatt-Rutter, Head of Counter-terrorism division about EU’s PVE policies, the role of media and internet and how to deal with returning foreign fighters. 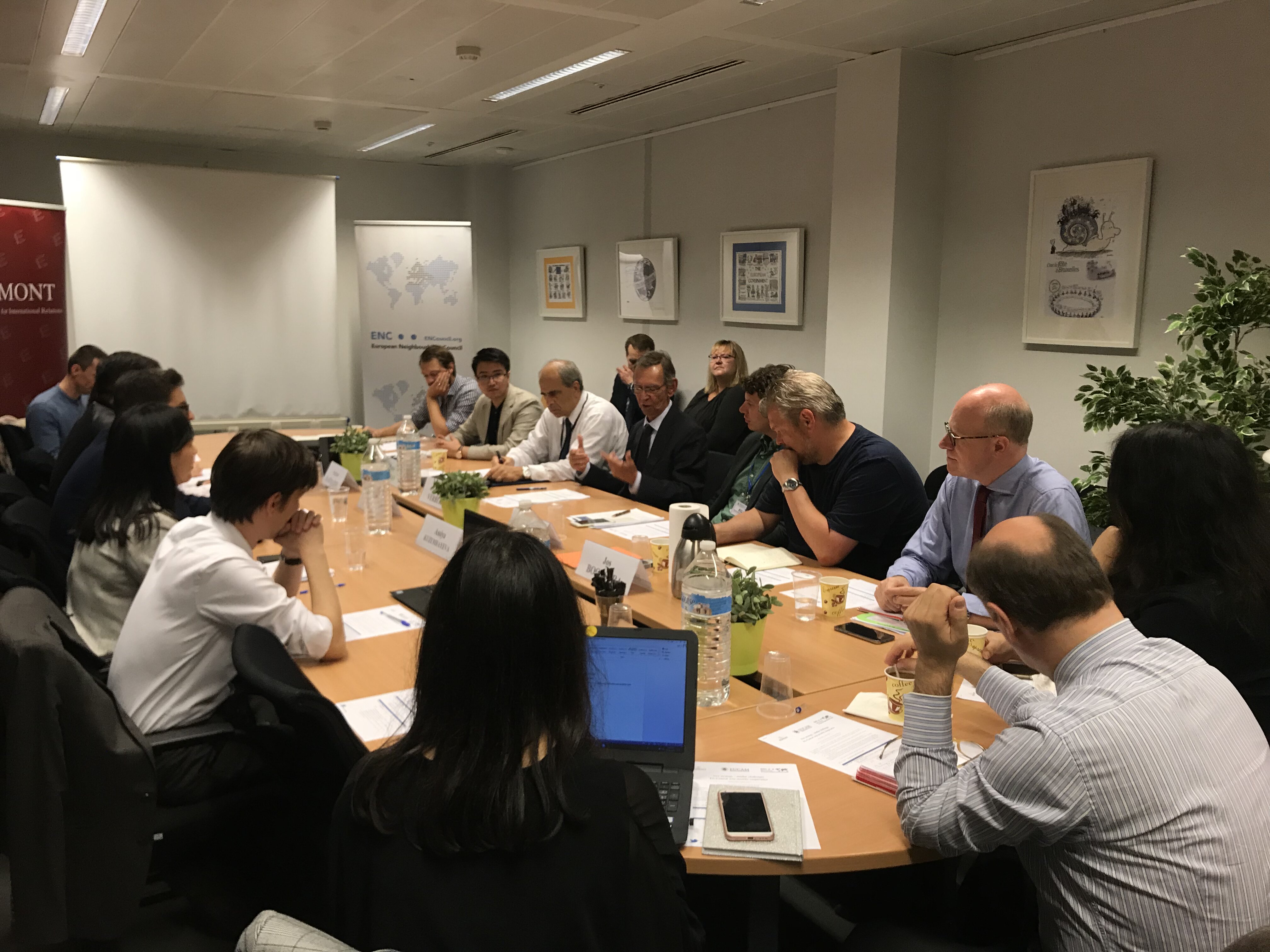 The flagship events of the so-called “Central Asia Week” were two high level events focusing primarily on EU-Central Asia security cooperation. The first was a public one organised by the EEAS in cooperation with the European Union Institute for Security Studies (EUISS) and featured opening remarks by Luc Devigne, Deputy Managing Director for Europe and Central Asia, EEAS and Amb. Peter Burian, EUSR for Central Asia, who both highlighted among other things the necessity for sustainable connectivity for Central Asia, intra-regional trade, increased people-to-people connectivity and especially the multilateral presense in the region which paved the way for the the panel discussion later on. 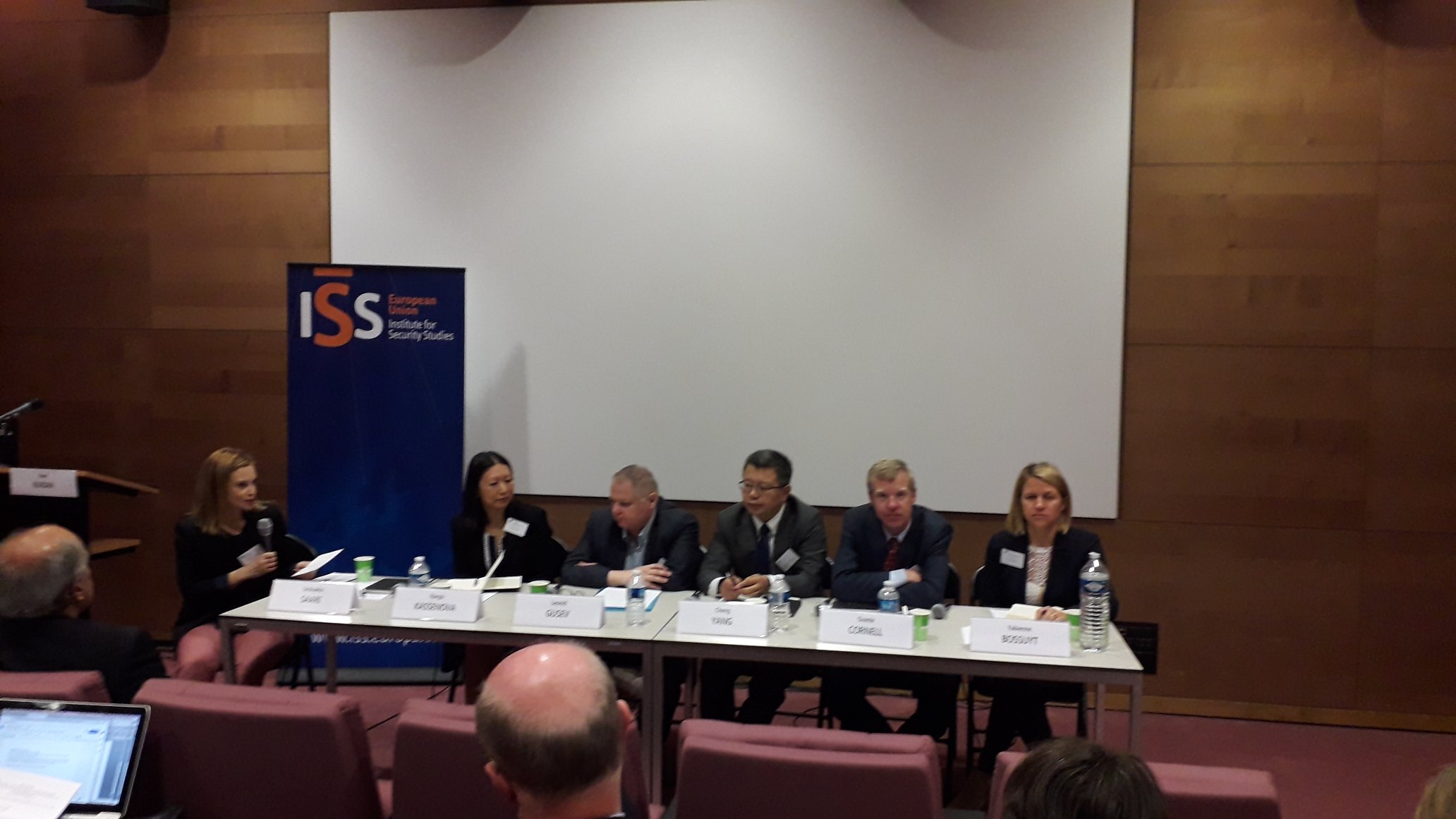 The panel, composed by Dr. Nargis Kassenova (University of Harvard) Dr. Leonid Gusev (Moscow State Institute of International Relations of MFA), Dr. Cheng Yang (Shanghai International Studies University), Svante Cornell (Institute for Security and Development Policy, Washington) and Dr. Fabienne Bossuyt (University of Ghent), focused on broad security challenges in Central Asia, including the water and security nexus, prevention of violent extremism and terrorism, hybrid threats and the security implications of international efforts to promote Euro-Asian connectivity. The discussion revolved around the key question of what role for each of the main external actors, – EU, Russia, China, USA –  in the region, and whether there is a “Great Game” competition revival or there is a window for cooperation based on the respect of international rules and norms from all sides.

As a follow up to this event, ENC in cooperation with the EUCAM programme of the Centre for European Security Studies (CESS) and Egmont – Royal Institute for International Relations, organised a – by invitation only – high level roundtable discussion entitled: “New strategy – similar challenges: EU-Central Asia security cooperation” with the EUSR for Central Asia, Peter Burian, opening the floor with his keynote presentation. The roundtable gave the opportunity to EU officials and civil society actors to discuss the security aspects of the new EU strategy for Central Asia and to EUCAM and Internews fellows and experts to present and discuss their research on PVE initiatives, security sector reform, gender and security and enclaves in Central Asia. 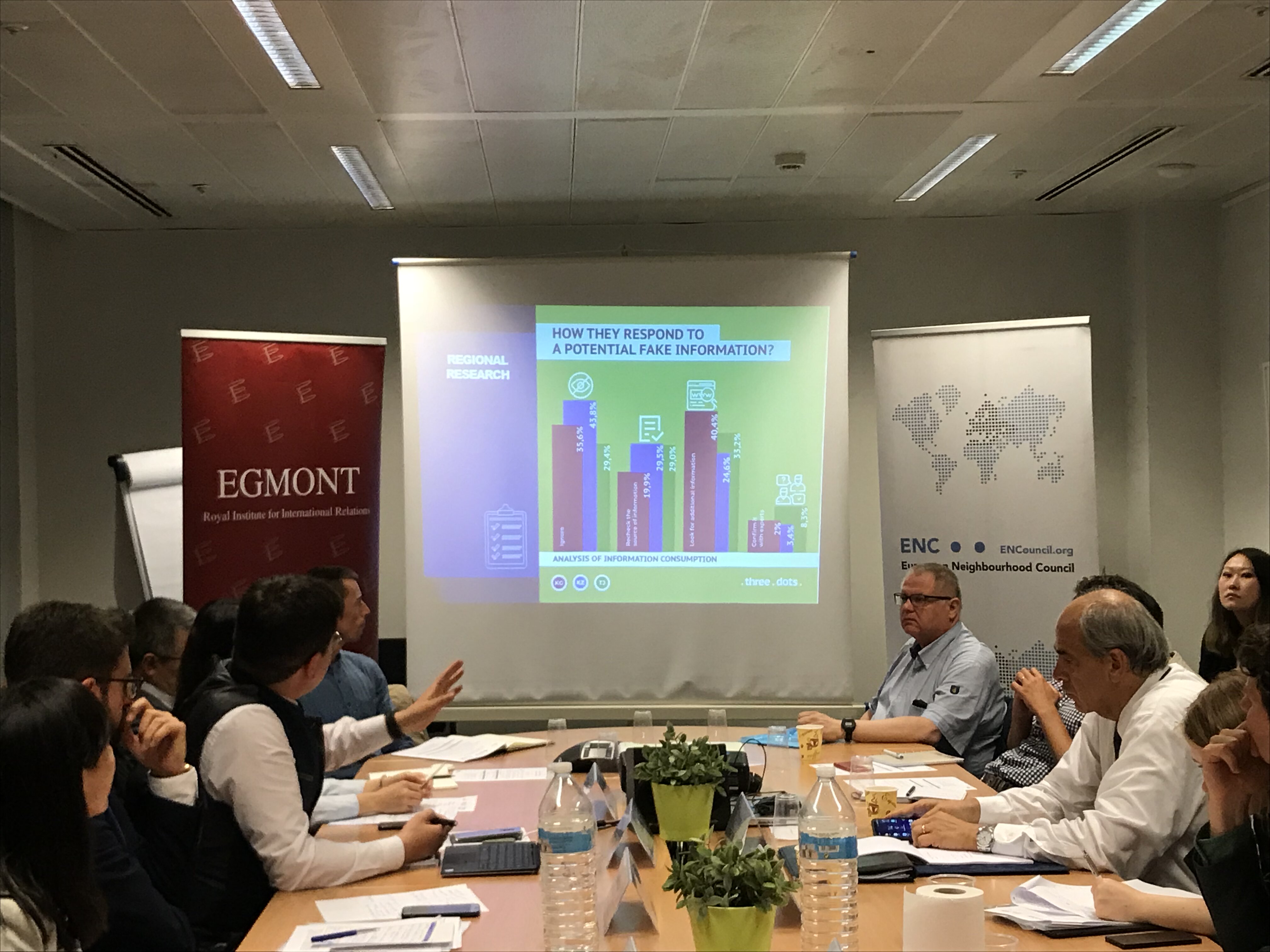 The real ‘next step’ lay in the implementation phase surrounding the new Multiannual Financial Framework. ENC will continue working with the EEAS, DG DEVCO and relevant stakeholders and  in close cooperation with our partners in Europe, in Central Asia and our Academic Council Members in the region in order to maintain the momentum. Following the 15th EU-Central Asia Ministerial meeting in Bishkek, ENC in cooperation with the Research Centre CERAL, University of Paris 13 (France) is organising a full day event in Brussels on the 10th of July 2019. The event is part of the GlobalContest project which focuses on exploring the ongoing contestations of global governance interventions of international organisations (IOs) by ostensibly “weakâ€ states and the impact of such contestations on IOs. The one-day event consists of three parts: a morning academic only workshop (academic exchanges), followed by an invitation-only lunch roundtable with policy makers and academics and an afternoon public event with opening remarks by Boris Iarochevitch, Head of Central Asia Division at the EEAS. Stay tuned!