The ENC Analysis is written by Dr. Karolina Kluczewska, ENC Academic Council Member and post-doctoral research fellow for the GLOBALCONTEST project by the CERAL research Centre at the University of Paris 13.  In this publication, she describes the evolution of the changing donor-NGO relations in Tajikstan. Eventually, the positive donor-NGO relations transformed into asymmetric power relations, characterised by subordination and exploitation of NGOs by donors. Because of these negative developments, mistrust is created between the two parties, which has significantly limited the agency of local NGOs in development work. 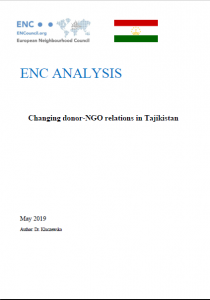