The ENC Analysis is written By Samuel Doveri Vesterbye, ENC Managing Director and expert in Turkey and the Middle East. He oversees ENC research projects across the neighbourhood and Central Asia. Within the context of the recent elections, Mr. Doveri Vesterbye reports on the findings from the electoral observation and field-interviews conducted at 7 out of 35 polling stations in Zhanaozen, a small de-industrialised oil-town close to the Caspian coast. In addition, a complimentary analysis about Kazakhstan’s current socio-economic situation is given, focusing particularly on the momentum gained from the signing of the EU-Kazakhstan Enhanced Partnership and Cooperation Agreement (EPCA) and the new EU-Central Asia Strategy, which was released in 2019. 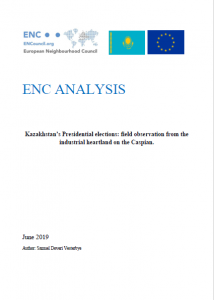 Kazakhstan’s Presidential elections: field observation from the industrial heartland on the Caspian