ENC Analysis: Realpolitik & the predictability of the West’s weaknesses

The European Neighbourhood Council (ENC) released its new analysis entitled “How realpolitik and the predictability of the West’s weaknesses helps autocrats legitimize their foreign policies”.

The ENC Analysis of September 2020 is written by Dr. Leila Alieva, ENC Academic Council Member, an affiliate of Russian and East European Studies, the Oxford University School for Global and Area Studies, and a part-time tutor at the Oxford Department for Continued Education, previously Senior Common Room member of St. Antony’s College, Oxford University and an academic visitor.

Dr. Leila Alieva provides an analysis of the external threats posed by powers like Russia, coupled with domestic political trends of xenophobia and illiberalism manifesting in growing far right movements, which represent a profound challenge to democratic institutions and values, such as freedom of expression.

The author argues that the West should restore its role as a normative power, or be more consistent and clear in its value-driven policies. It is important not to justify the ‘predictability’ of the West’s behaviour by compromising on this goal for the sake of pragmatic interests, but rather demonstrate integrity, unity and consistency. 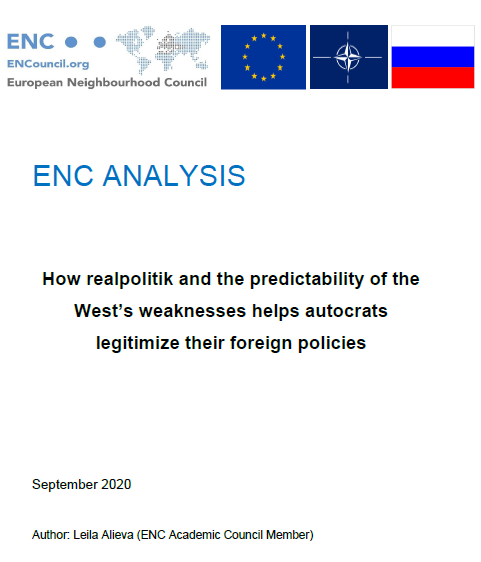