ENC Analysis – Russia and Serbia: Between Brotherhood and Self-Serving Agendas

The ENC Analysis is written by Dr. Radeljic, ENC Academic Council Member and Associate Professor of International Relations at the University of East London. In this article, he depicts the similarities and the differences between Russia’s and Serbia’s stance towards the Balkans and Kosovo. 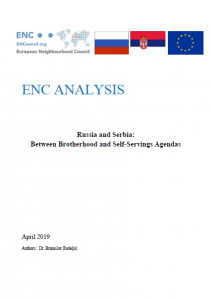 The full Analysis is available in the PDF version below.

Russia and Serbia: Between Brotherhood and Self-Serving Agendas