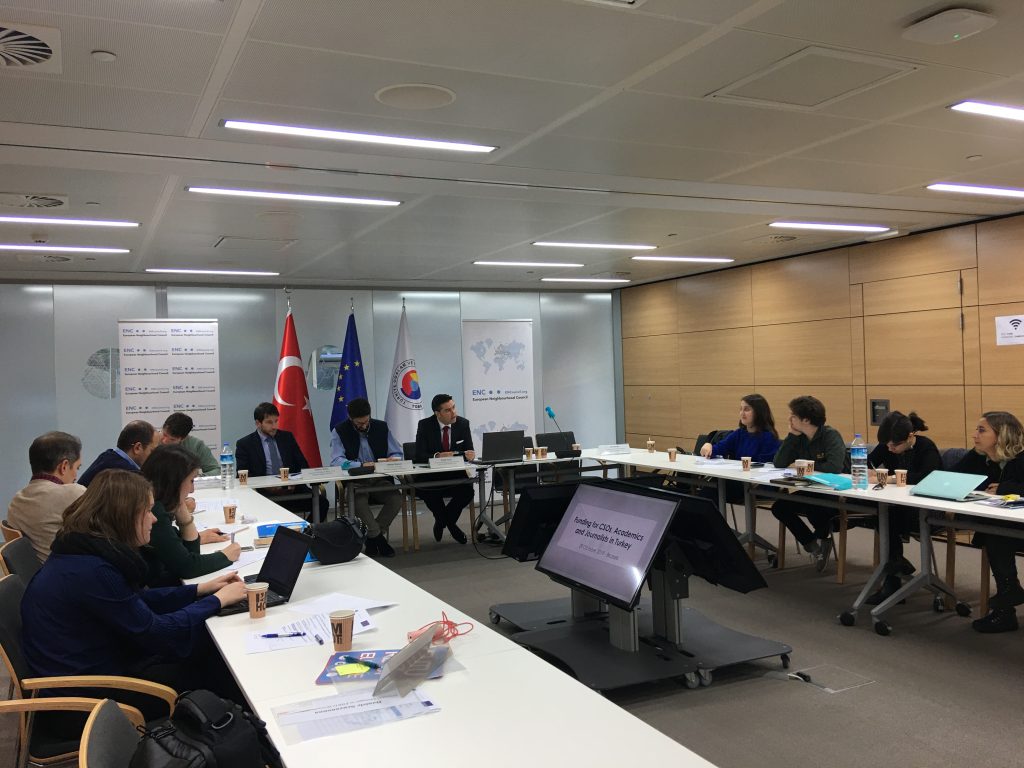 The European Neighbourhood Council (ENC) in cooperation with the Economic Development Foundation (IKV) and with the support of  Friedrich Naumann Foundation (FNF) Turkey and the EU Delegation in Ankara, organised a one-week training programme entitled “Future values training: European sentiment in Turkey among opinion-shapers and youth leaders 2019-2020”, which took place between the 28th and the 31st of October at the premises of IKV in Brussels.

The project is an extension of an existing ENC training and public lecture programme, which took place between fall 2018 and spring 2019, in which four Turkish opinion shapers successfully underwent trainings and meeting sessions in Brussels, after which each opinion shaper gave a university lecture across Turkey to student audiences and academics.

Eight young Turkish experts visited Brussels for a week-long exchange which included roundtables, general trainings and private encounters with inspiring innovators, activists, EU officials, and experts on various topics related to each opinion shaper’s work experience and thematic priority areas. This aim to give a full picture of Europe’s forward thinking priorities, trends and progressive strategies for the future, including the various thematic priority areas’ relationship to Turkey. 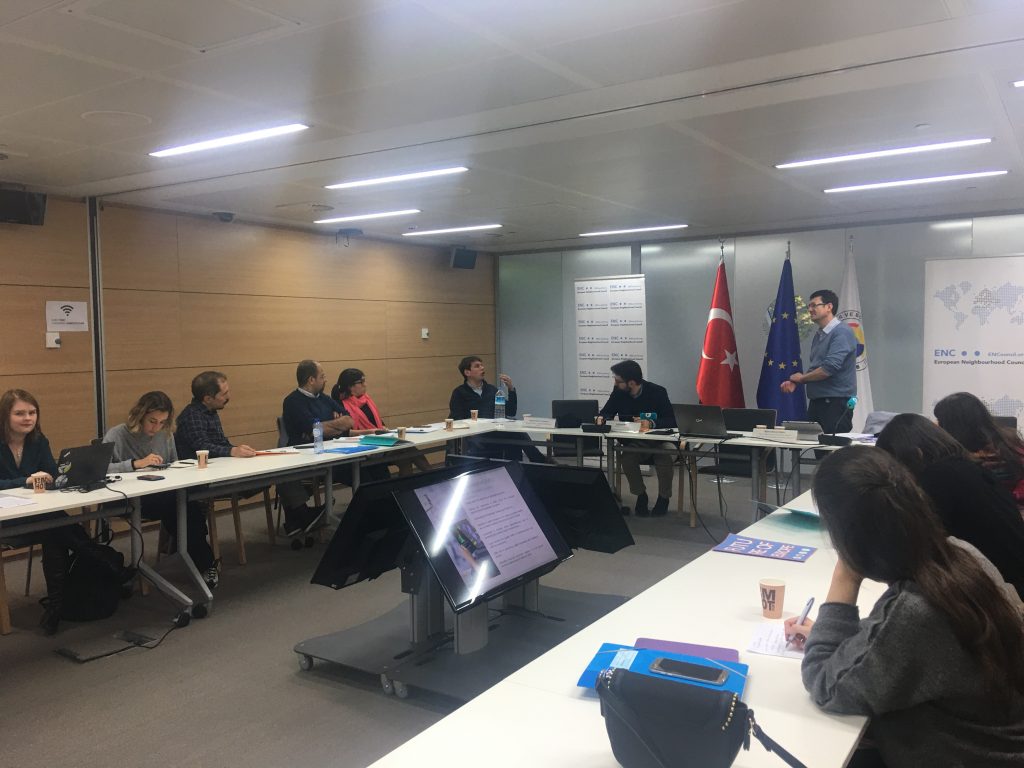 Marc Franco‘s presentation focused on the EU Global Strategy and Neighbourhood Policy with an emphasis on the construction of the European Union and the treaties that established its framework. He explained the context in which the European Neighbourhood Policy emerged as part of the basic dynamics of the development of the EU internal market by widening and deepening, with the driving forces being security and stability. Haluk Nuray described the EU’s Foreign Policy along with its targets which include peace, international security and trade. He particularly mentioned the importance of EU financing, development cooperation and migration as connected policies in the preservation of citizens’ safety. Björn-Sören Gigler’s presentation tackled Technology and Privacy in European foreign policy today with an overview of the different programmes in place, and particularly the EU digital policy emphasizing the factors that influence and improve digital, economic and social development. He focused on the importance of privacy protection and how Blockchain technology will impact social policy, good governance, and civil society across the EU’s neighbourhood. 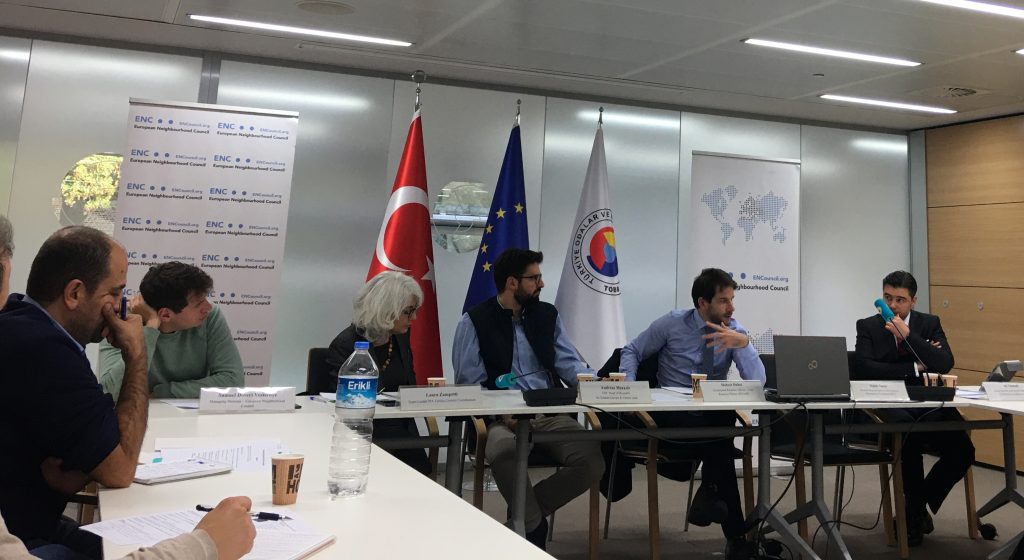 Laura Zampetti proposed an overview of Funding for Turkey under IPA. She underlined IPA’s modalities, programming, challenges and opportunities with an emphasis on Turkey. Hubert Duhot clarified the functioning of Funding under FPI for Turkey, highlighting the importance of supporting interventions related to counter-terrorism, migration management and conflict mediation. Ali Türkelli  focused on Funding available for Civil Society Organisations, academics, and journalists in Turkey. He explained the relevance of innovation and research & development in this context, including practical components of civil society grant application and funding. 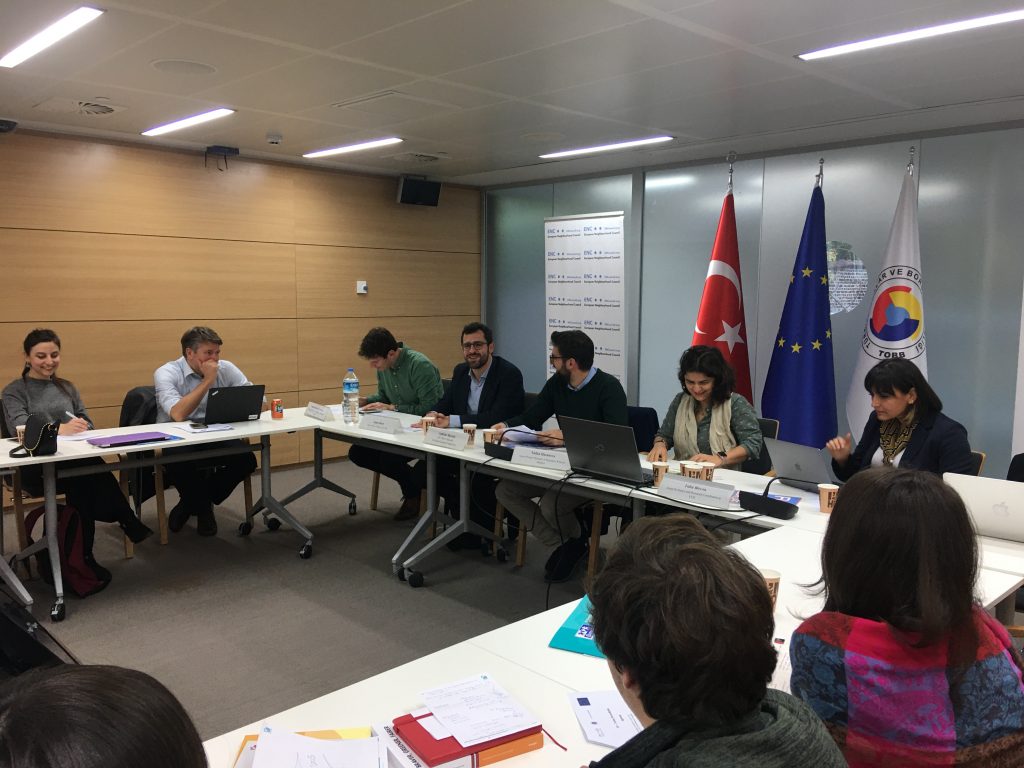 Haluk Nuray‘s presentation encompassed a general overview of EU-Turkey relations with a focus on commerce and economics. He underlined the institutional importance of the 1995 EU-Turkey Customs Union, which helped standardise Turkish regulatory frameworks, while supporting Foreign Direct Investment (FDI) levels. Tim-Joris Kaiser described the evolution of EU-Turkey trade relations and mentioned its benefits to Turkey, as well as challenges in terms of future reforms. Tuba Bircan provided a detailed presentation about the relevance of data collection when it comes to migration and its consequences for government authorities and different migrant demographic groups. She underlined the need for new approaches and alternative data sources in order to have a better understanding of migration and its impacts on society. James Rizzo clarified the role of institutions and rule of law in the context of Turkey with a focus on the importance of judicial reforms in relations to current political dynamics. Nafisa Hasanova spoke about media and anti-corruption highlighting the general conditions of journalism in Turkey, providing practical monitoring guidelines to analyse degrees of independence.

The second phase of the project will take place in Turkey, which consists of a series of twelve public university lectures across Turkey, in which the opinion shapers discuss privacy/technology, renewable energy, foreign-policy, free media, trade, conflict-resolution, migration, anti-corruption, and the importance of institutions.

For more information about our speakers’ presentations, please see below:

Funding for CSOs, Academics and Journalists in Turkey

The Real Value of EU Values