European Union and Central Asia: Around the New Strategy

European Union and Central Asia: Around the New Strategy

On July 10th, following the 1st ever EU-Central Asia Forum which took place on the sidelines of the 15th EU-Central Asia Ministerial meeting in Bishkek, Kyrgyzstan on the 7th of July, the European Neighbourhood Council (ENC) in cooperation with the research centre CERAL (Université Paris 13) organised a one-day event which is part of the research project “Contested Global Governance, Transformed Global Governors? International Organisations and ‘Weak’ States” (GLOBALCONTEST) funded by the French National Research Agency (ANR). The project focuses on exploring the ongoing contestations of global governance interventions of international organisations (IOs) by ostensibly ‘weak’ states and the impact of such contestations on IOs. The one-day event consisted of three parts: a morning academic only workshop (academic exchange and corrections on papers), followed by invitation-only lunch roundtable with policy makers, academics and civil society representatives (talking implementation and monitoring of the new EU-Central Asia Strategy) and an afternoon public event which was kindly supported and hosted by United Nations Development Programme (UNDP) Representation office in Brussels.

The first part was a closed academic workshop, which was dedicated to different stages of the EU’s engagement with Central Asia since the early 1990s. International organisations (IOs) are usually analysed as diffusers of international norms, socialising countries to the international order and standards of governance. In the workshop, academics reversed this perspective and took the case of the EU to ask whether IOs learn from interactions in the field through long term engagement or when they encounter different forms of contestations on the ground.

In the second by invitation only lunch meeting, EU officials, think tank/NGO representatives and academics  discussed the main features of the new EU Strategy on Central Asia and what differentiates the latter from previous approaches towards the region. They also discussed what makes the EU different from other actors, the coordination of funding and possible synergies with other international partners.

The last leg of the one-day event, offered an opportunity for EU officials to present the main features of the new EU Strategy on Central Asia, for the project team of GLOBALCONTEST to communicate the findings of their research and to convey the importance of civil society, academics and think-tanks in the implementation of the new EU-Central Asia strategy. 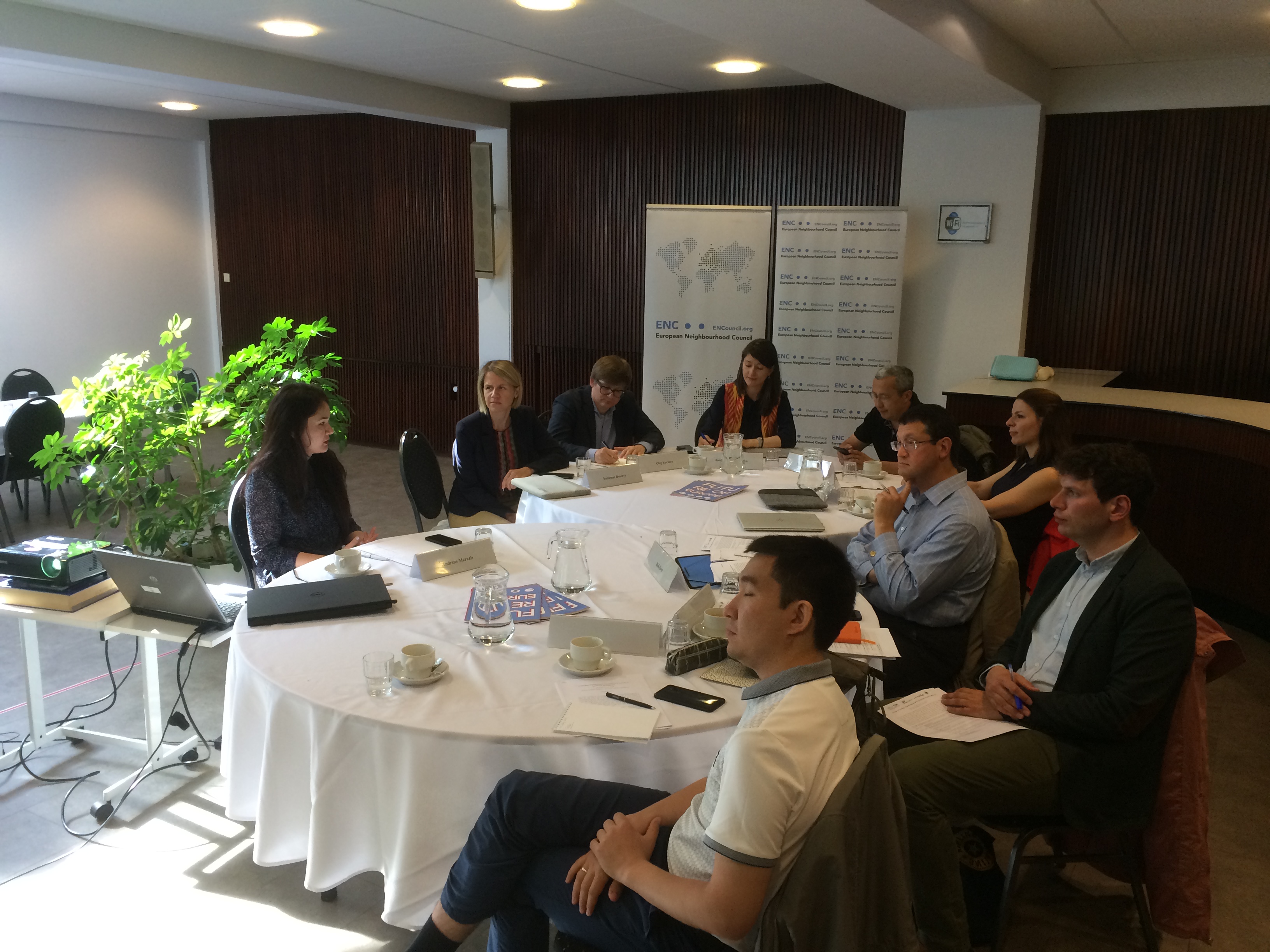 In the opening remarks of the high-level public event, Barbara Pesce-Monteiro (Director, UN/UNDP Representation office in Brussels) and Samuel Doveri Vesterbye (Managing Director, ENC) highlighted and praised the bottom-up civil society consultation the European Commission has undertaken for the preparation of the new EU strategy on Central Asia. Ms. Pecse-Monteiro said that for UNDP it is important to have think tanks involved in policy-making, because it will ensure that measures become operational. The EU has numerous joint engagements and challenges with Central Asia, which are also addressed in the new EU strategy for Central Asia: rising inequality, transparency, migration, violent extremism, natural disasters, climate change, productivity, and the target indicators of the sustainable development goals. Mr. Doveri Vesterbye underlined ENC’s contribution in the shaping process of the new strategy by organising fellowships, producing papers and stimulating discussions on border management, education, security and development, among other issues. 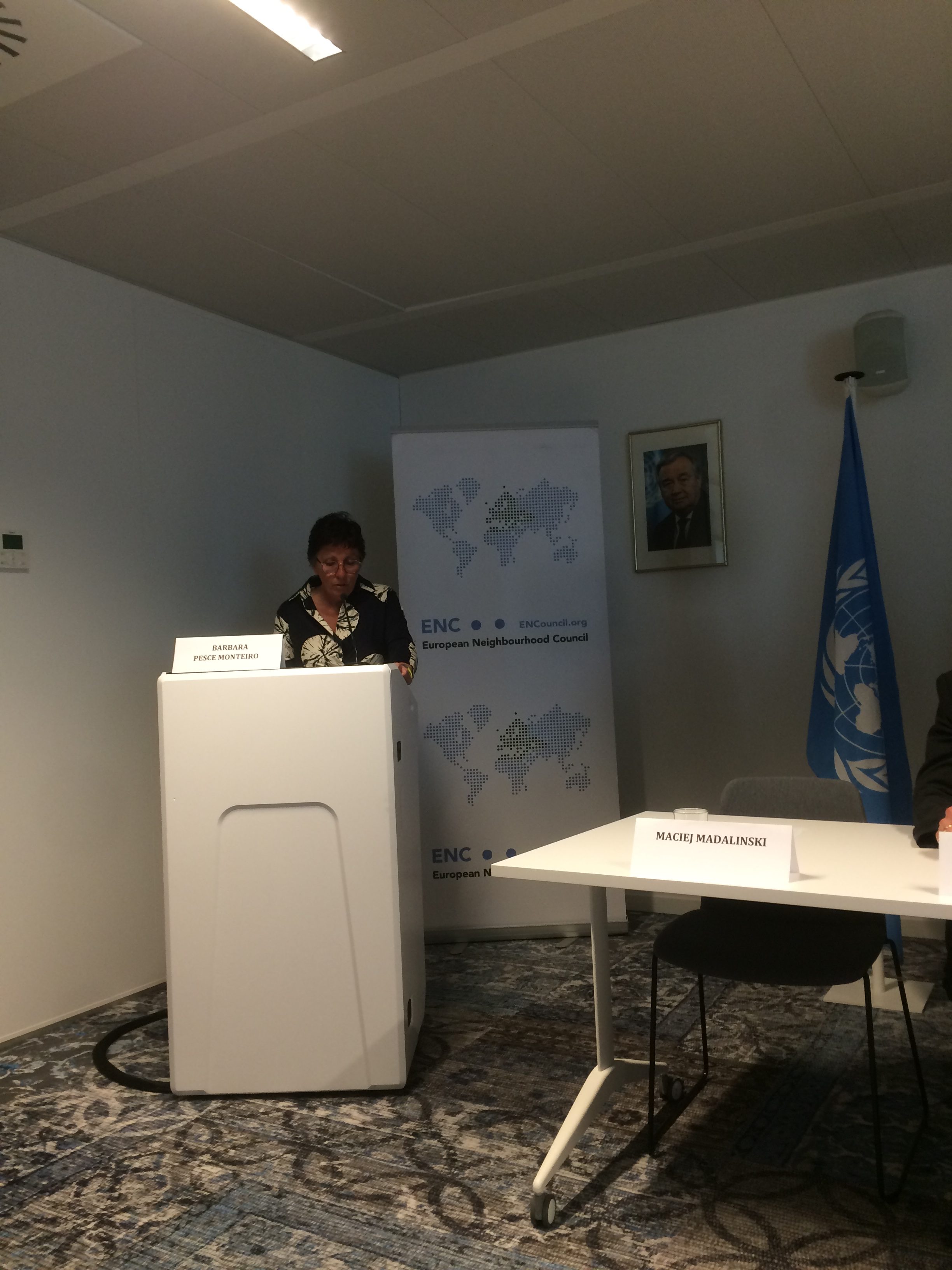 The panel discussion featured comments and thoughts by Boris Iarochevitch (EEAS, Head of Division, Central Asia) and Maciej Madalinski (Acting Head of sector for Central Asia, Unit for Middle East, Central Asia, South Asia, DG DEVCO) who explained the main elements of the new EU strategy on Central Asia and what differentiates the latter from the 2007 one.  The new EU strategy is considered only a starting point: it still needs to deliver on its objectives. This is why feedback from think tanks, academics and the countries themselves is of paramount importance.

Some of today’s developments in Central Asia have opened up new opportunities for taking the EU-Central Asia partnership forward, for example: Uzbekistan’s recent conciliatory foreign policy has eased regional tensions and opened the door to cooperation between neighbours, a few months ago Kazakhstan underwent political changes, there have also been developments in Eurasian connectivity (Belt and Road Initiative), and more cooperation with Afghanistan is possible now.

Since the area leaves room for a great deal of opportunities, big players have become once again interested in Central Asia with a geopolitical agenda. Therefore, Central Asian countries prefer to diversify their options in international cooperation by requesting for example Enhanced Partnership and Cooperation Agreements (EPCAs) with the EU as a balancing factor. The EU is prepared to be a reliable and transparent partner because its own experience has shown the benefits for cooperation with neighbouring states. The EU has its own interests in the region without of course neglecting to take into account the needs and the demands of Central Asians.

Since the EU is considered an outsider in the region, it has a different role to play compared to Russia and China. Central Asia sees the EU as a business market with soft power instruments such as innovative technologies, infrastructure and investment. This does not necessarily mean that the EU does not have interests of its own.

The new EU strategy for Central Asia is built on two pillars: resilience and prosperity. The EU has already been focusing on strengthening the infrastructure capacities of Central Asian countries. At the same time it supports sustainable reforms and security areas. The new strategy is very much in sync with the EU’s connectivity strategy, focusing on improving regional cooperation on issues related to migration, climate change, water management,  intra- and interregional trade and people-to-people contacts, to name but a few. The EU actively supports the Central Asian states in their effort to obtain WTO membership and will continue working together with international organisations such as the Organization for Security and Co-operation in Europe (OSCE) and United Nations (UN), and financial institutions such as the EBRD, EIB and ADB.

The new EU strategy on Central Asia will also be influenced with regards to the new Multiannual Financial Framework (MFF) 2021-2027 and the Neighbourhood, Development and International Cooperation Instrument (NDICI). Under the latter, the idea is to bring everything under the same umbrella. There will be no division between developed and developing countries, which will impact the Central Asian region (especially Kazakhstan and Turkmenistan). It will also be easier to work with all instruments and to work as one team with EU colleagues that are working on thematic areas. 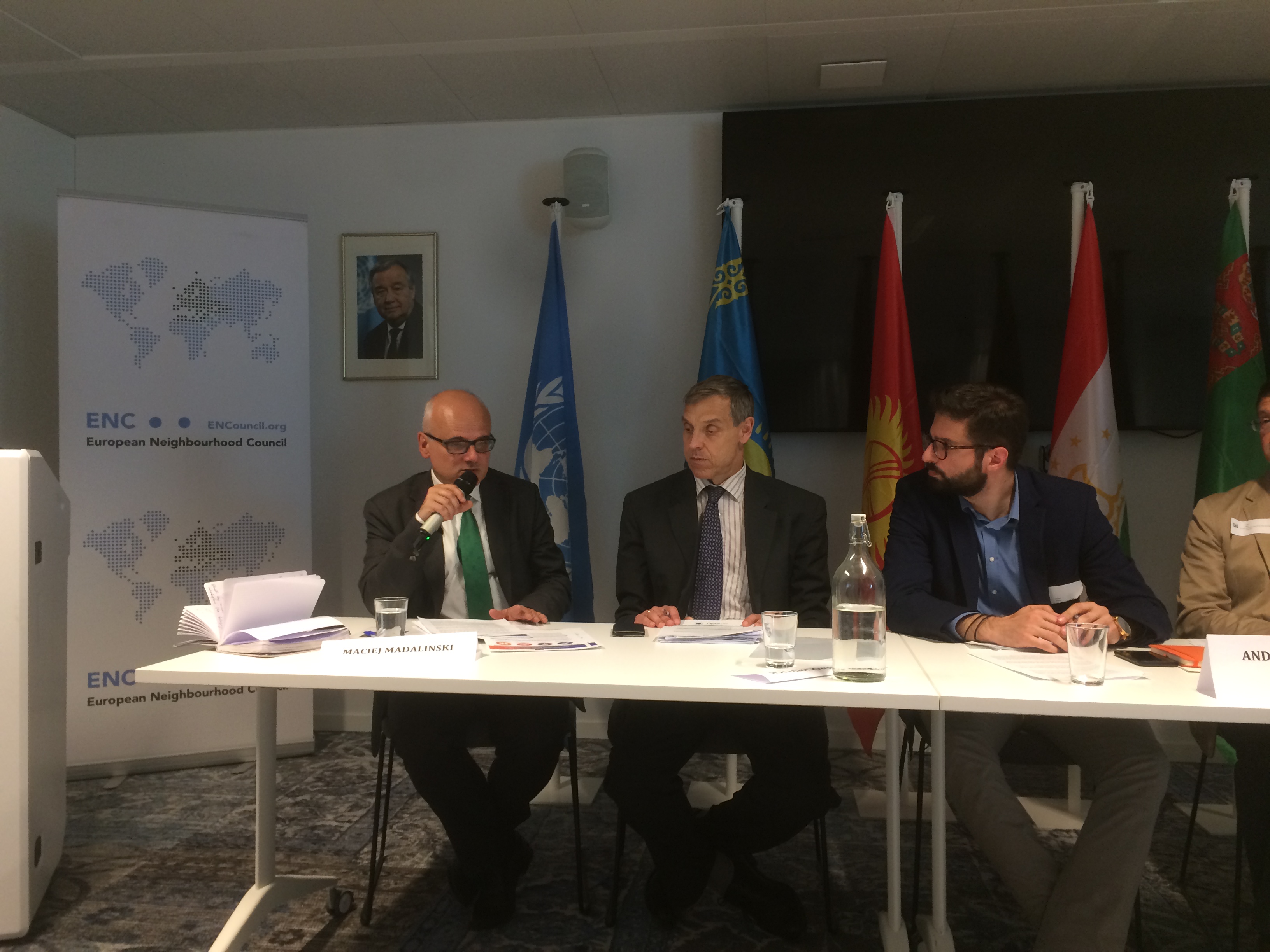 Prof. Rick Fawn (University of St. Andrews) made a few remarks about the new strategy and its potential in the region.  First, he believes that there should have been more references on other actors in the region. For example, the Council of Europe’s educational programmes influence Central Asia deeply. But there are also other parties active in the region, which the EU does not necessarily interact with.

Second, the EU states explicitly that it is neither a competitor nor a geopolitical actor. Even though it is important to repeat this, it is unfortunately not enough. There are other actors that like to misrepresent the EU. As a normative actor spreading human rights values, the EU could interact with the region through circulation of people. Even though the EU’s reach is rather limited, they should be represented in the region.

Third, Prof. Fawn welcomes the fact that one third of the regional budget is spent on Erasmus+ exchanges. Yet he also points out that in this area the EU faces fierce competition with Russia and China. The number of Central Asian students going abroad and studying in Russia or China needs to be taken in consideration as well.

Dr. Oleg Korneev and Dr. Karolina Kluczewska from Le Centre de Recherche sur l’Action Locale (CERAL) based at University of Paris 13 (France) are currently running the GLOBALCONTEST project. The project looks at patterns of interactions between the EU and Central Asia and how these exchanges influence, adapt and transform official frameworks of cooperation. Professionals from think tanks and non-governmental organisations within Central Asia will pinpoint the differences and continuities of the EU’s new Central Asia strategy. At the same time, this EU perspective can be compared to cooperation with other international partners, such as Russia and China.

Although their research project is still a work in progress, Dr. Korneev and Dr. Kluczewska shared five reflections and lessons learnt on EU foreign policy with the audience. They were able to answer how the EU has been coordinating its funding and approaches with other international partners engaged in Central Asia: 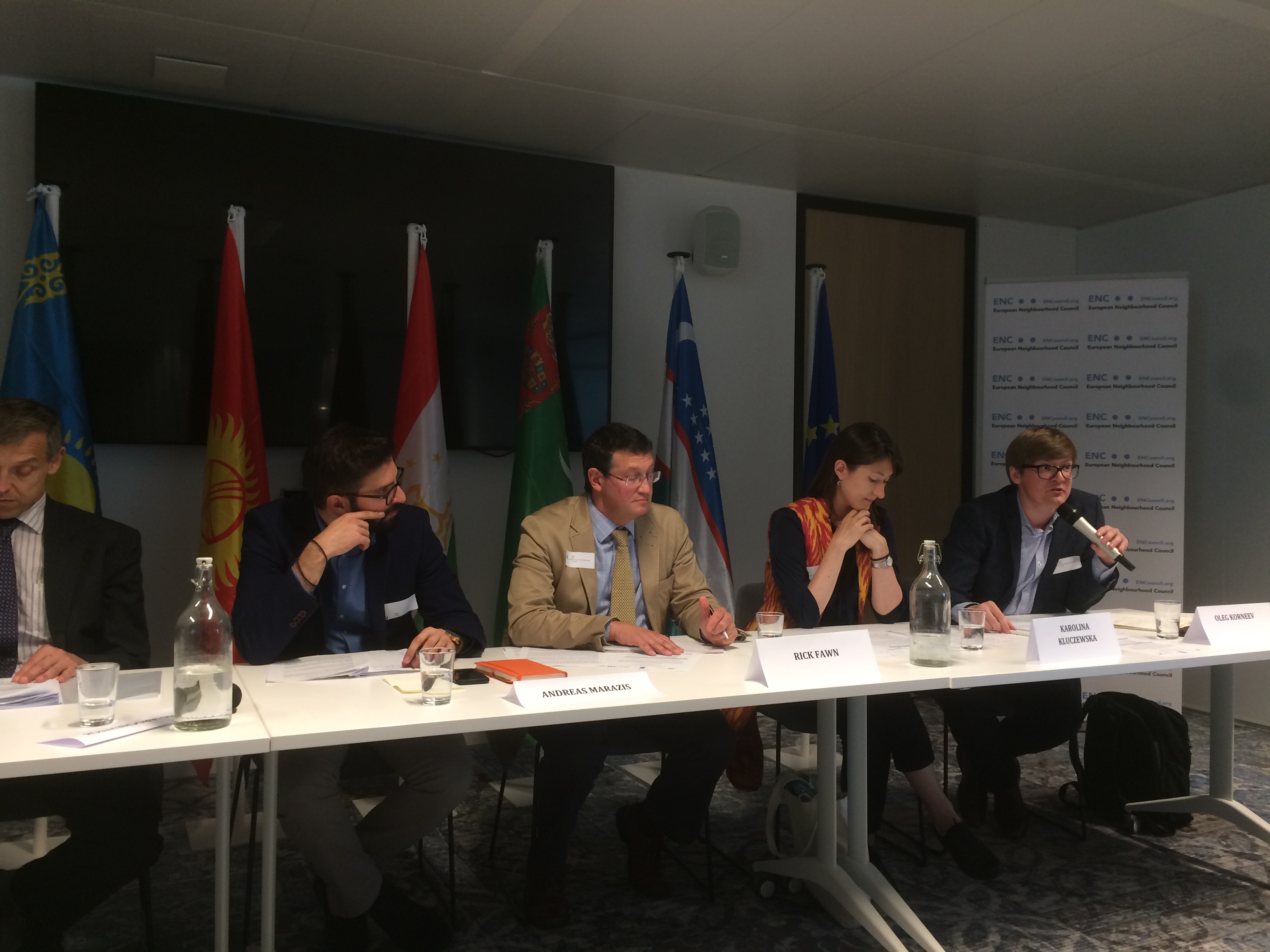