Prospects for Peace Research in Central Asia: Between Discourses of Danger, Normative Divides and Global Challenges 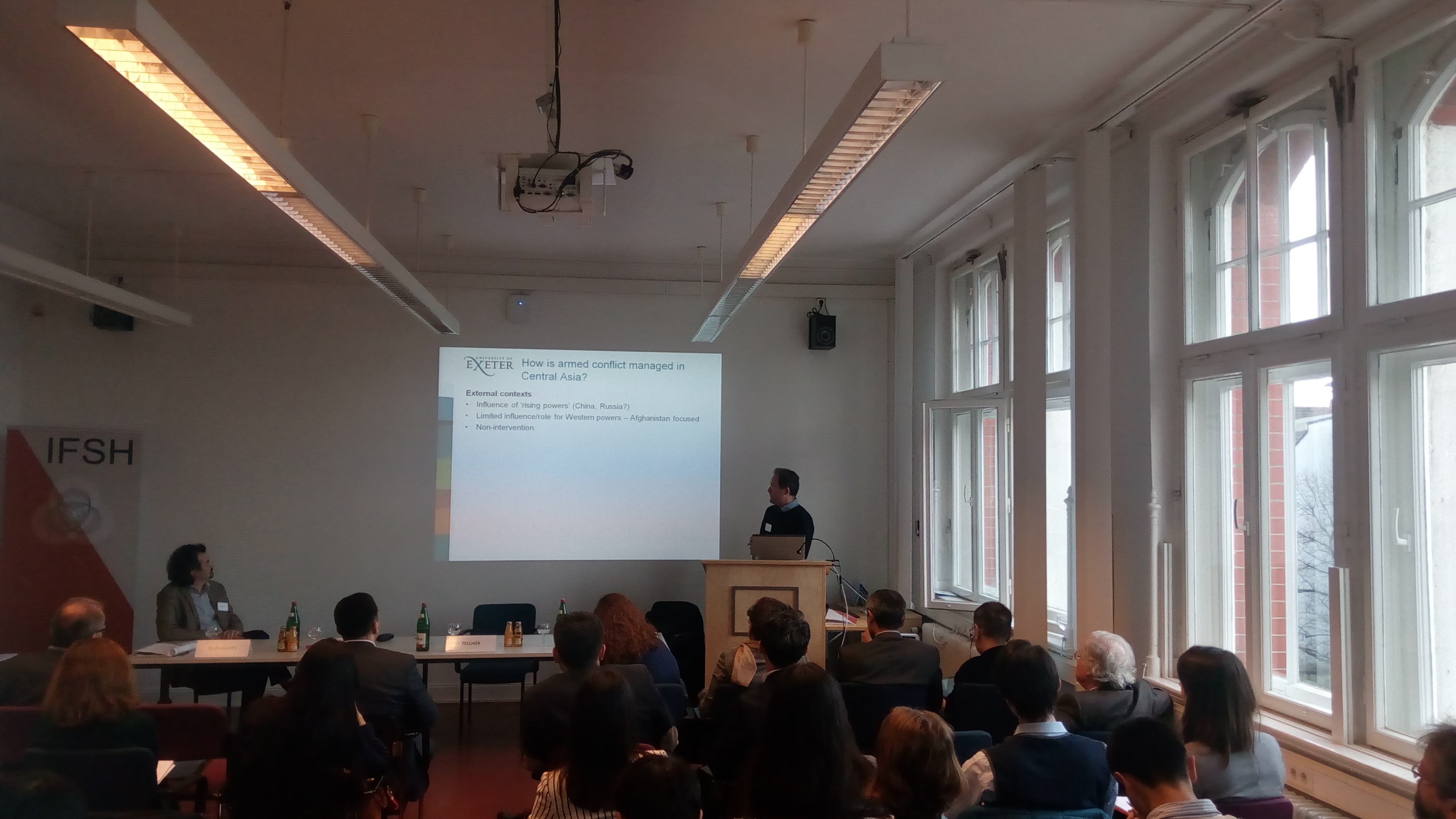 About three weeks ago, I had the opportunity to visit Hamburg and attend the third annual conference at the Institute for Peace Research and Security Policy, The conference, which was organized by the University of Hamburg (IFSH) focused on the prospects for peace research in Central Asia, taking an intermediary approach named ‘Between Discourses of Danger, Normative Divides and Global Challenges’.

Academics from the region, and the EU, as well as young PhD candidates had the chance to present their work and exchange ideas in an effort to address the following questions:

At this planned international conference, researchers from five European and four Central Asian states searched together for prospects of peace research in and from Central Asia. In post-Soviet Central Asia, the preconditions for this field of research are mixed. While there is no shortage of studies on conflicts, security and stability in and with Central Asia, the underlying concepts, the state of research and its dissemination are predominantly Western dominated and often securitized. Genuine Western peace research concepts are poorly received in Central Asia as they are confronted with political, normative and cultural barriers and different understandings of peace. Researchers from the region have often used the theories and tools of traditional security studies when studying conflict issues. They have only begun to develop region-specific approaches with peace research perspectives rooted in their living conditions, political and academic cultures. Thus, the state of research on peace in Central Asia appears both unbalanced and limited.

The theme and the concept of the conference were both relevant and highly innovative. In view of contemporary power and normative shifts in Eurasia, the planned joint search for prospects of peace research in, from and with Central Asia can help prevent alienation between scholars from the two regions. The approach is innovative as it will take a fresh look at different concepts of peace and relate them to current discourses. The aim was not to fill the broad research gaps, but to get inspired, and to learn from each other and to open up new horizons for both sides.

Among the panelists were several well-known international and local experts and respected academic members from European and Central Asian Universities with international publication records, such as Dr. John Heathershaw, Associate Professor at the University of Exeter, Prof. Rustam Burnashev, Head of Social Science Department at the German-Kazakh University in Almaty, Dr. Parviz Mullojonov, Board Chairman at the Open Society Institute (OSI) brunch in Tajikistan and senior advisor for the International Alert Office in Tajikistan, and many others.

The speakers and the participants shared their views about Central Asia and their concerns about the difficulty of conducting research and implementing projects in the region. 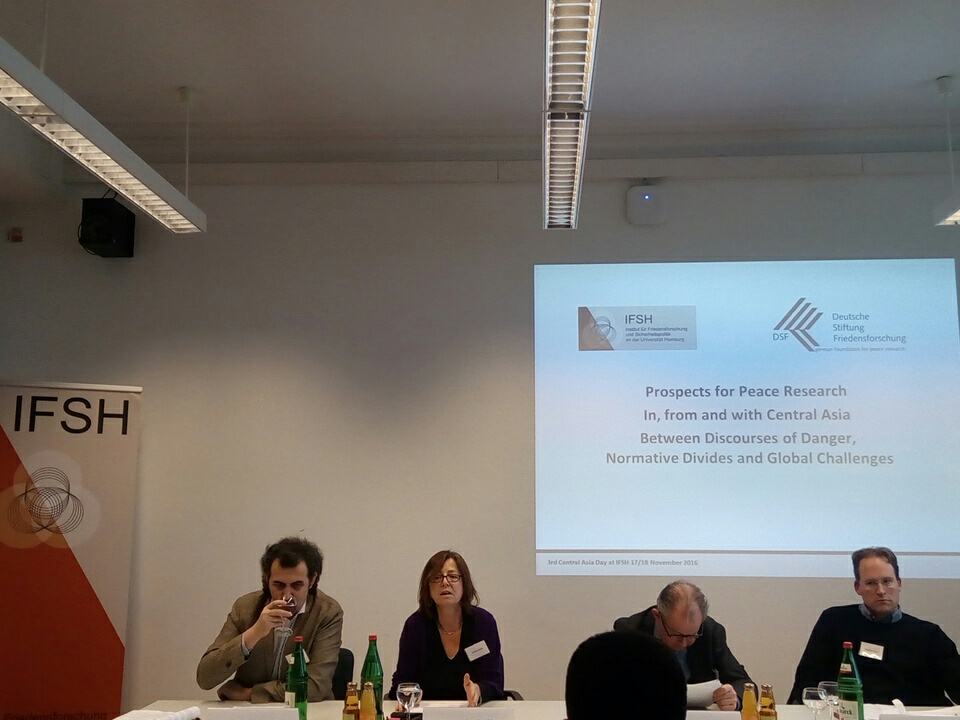 Prof. Rustam Burnashev spoke about the sustainability of Central Asian regimes which is formed by the following mechanisms:

He also noted the fact that with increasing limitations on personal and social space as well as public policy discourse, some special interest groups lose “the right to speakâ€ in the region.

In an exchange between Andreas Marazis, Head Researcher for Eastern Europe and Eastern Partnership at ENC, and Prof. Burnashev, the two experts spoke about the importance of creating deeper synergies between European civil society and Kazakh-based institutions. The professor pointed out that “we can collaborate in the study of radicalisation; it is a question of importance in Central Asia, and for Kazakhstan especially, and of course we have some misunderstandings in this topic, we understand radicalisation in different ways. We must work through radicalisation.”

He also noted that a very popular and important topic – especially for Kazakhstan – is that of religious identification. We need to study more widely this topic together said Prof. Burnashev. 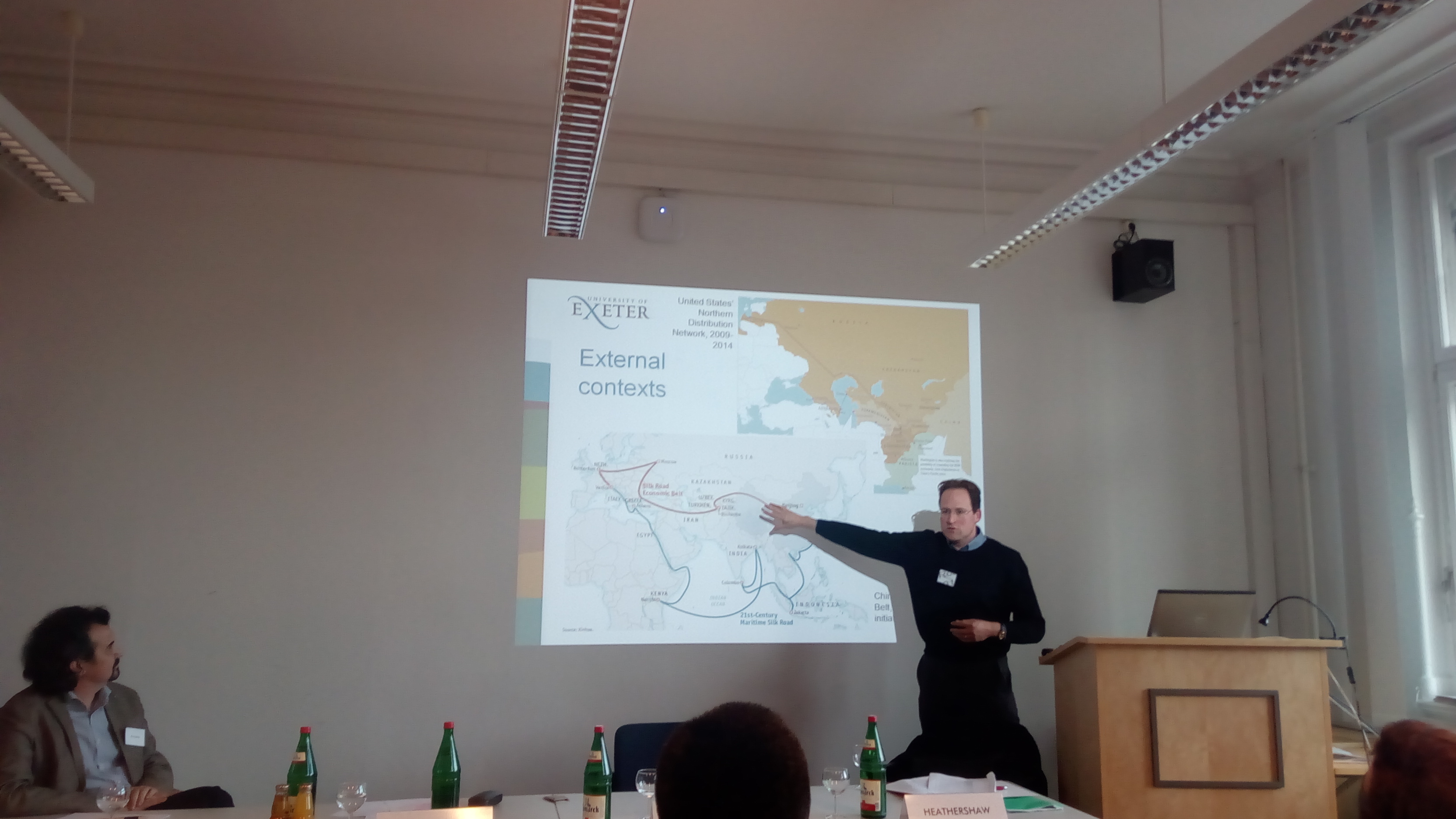 Dr. John Heathershaw presented early findings of his and his team’s research from an Economic and Social Research Council (ESRC)-funded project focusing on “Rising Powers and Conflict Management in Central Asia” and more specific on how armed conflicts are managed in Central Asia.

During an academic discussion with Andreas Marazis, Dr. Heathershaw explained what it means to be political researcher in the region by using the example of Uzbekistan. He characteristically mentioned that “â€¦it is perfectly possible to be a political researcher in Uzbekistan by going and listening to the government and letting them tell you why they do and write about that. If you consider that to be research, then fine. There are certain things we can learn that way. It is useful to know how Uzbekistan responded to violence in 2010, by listening to Uzbekistan’s official (nationally and locally) and find out what they did, or how they represent what they did. But we will never know what really happened that way, we will have their representation and interpretation of what happened. But unfortunately because Uzbekistan doesn’t open its borders for research on these matters, you’re not going to be able to speak openly to villages and people and hear how they experience and feel the Uzbek state’s response. It’s the most minimum level of research, but if one is interested in state discourse, state policy, then it is possible to do that. That is what is considered to be policy research in Uzbekistan and other parts in Central Asia.”

During the course of the two-day international conference the panelists elaborated on what are the most attractive topics and the main problems in conducting research in the region. Prof. Irina Chernykh, chief research fellow at the Kazakh Institute for Strategic Studies under the President (KISI) in Astana, pointed that stability is the keystone of security studies in Kazakhstan and that research focuses on maintaining stability which is equivalent to regime stability. Others like Dr. Shahrbanou Tadjbaksh, Lecturer in Human Security, Institut d’Etudes Politiques (Sciences Po), identified some of the main problems – free space is shrinking, NGO numbers are reducing, sensitivity in terms of projects and conferences on behalf of the authorities, more and more Central Asian students are going to China for studies – and questioned why we do not have projects funded by the Central Asia Governments while recommending that Western authors must be translated in the local languages as well, not only in Russian. 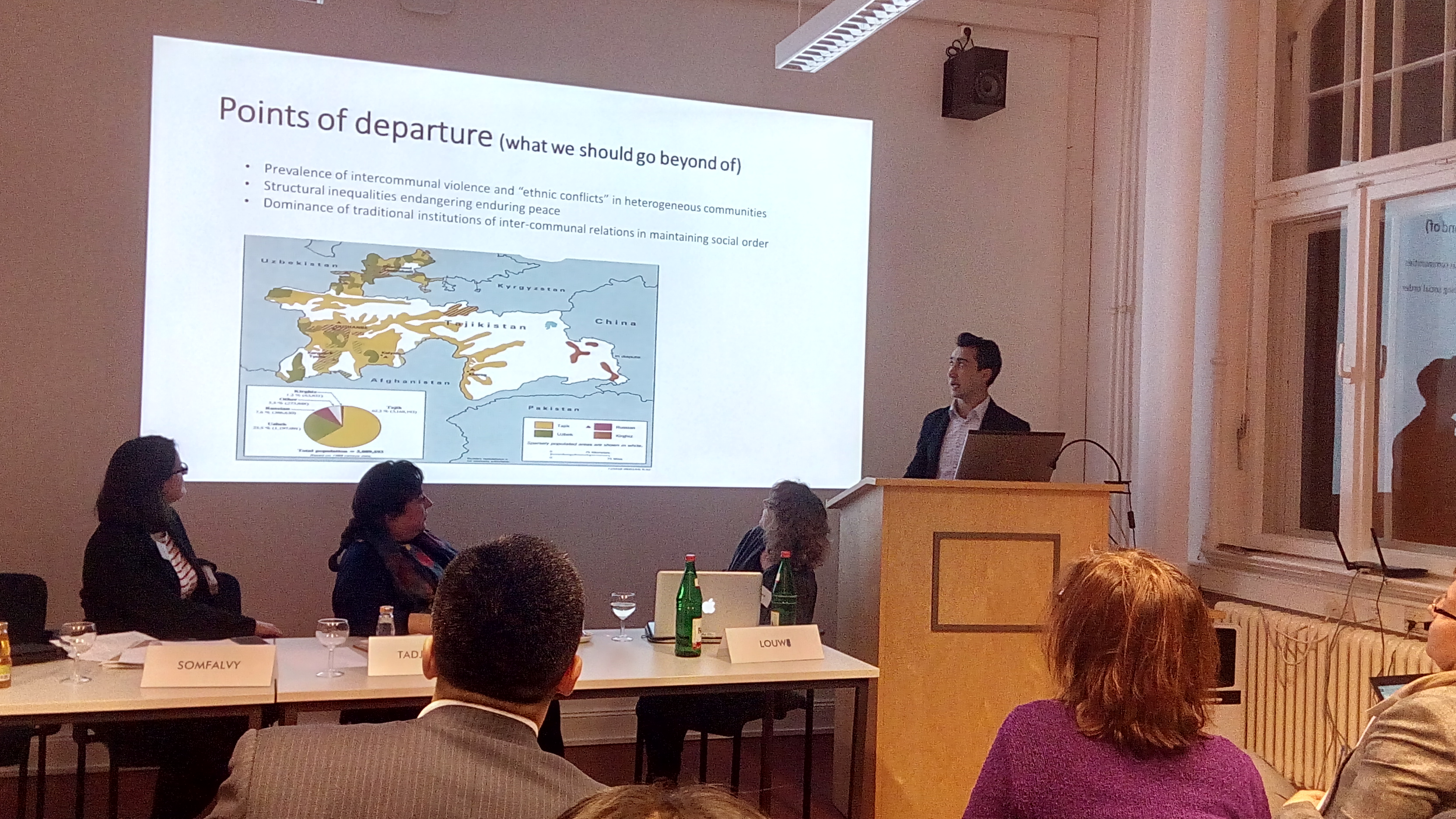 Among the various PhD presentations it is worth mentioning the case of Mr. Khushbakht Hojiev, PhD Fellow at the Centre for Development Research in the University of Bonn, who tried to frame “everyday peace” in Northern Tajikistan.

About public perceptions and discourses on foreign fighters from Kyrgyzstan combined with a lot of data were provided by Ms. Almakan Orozbekova, PhD candidate at the Max Planck Institute for Social Anthropology in Halle. 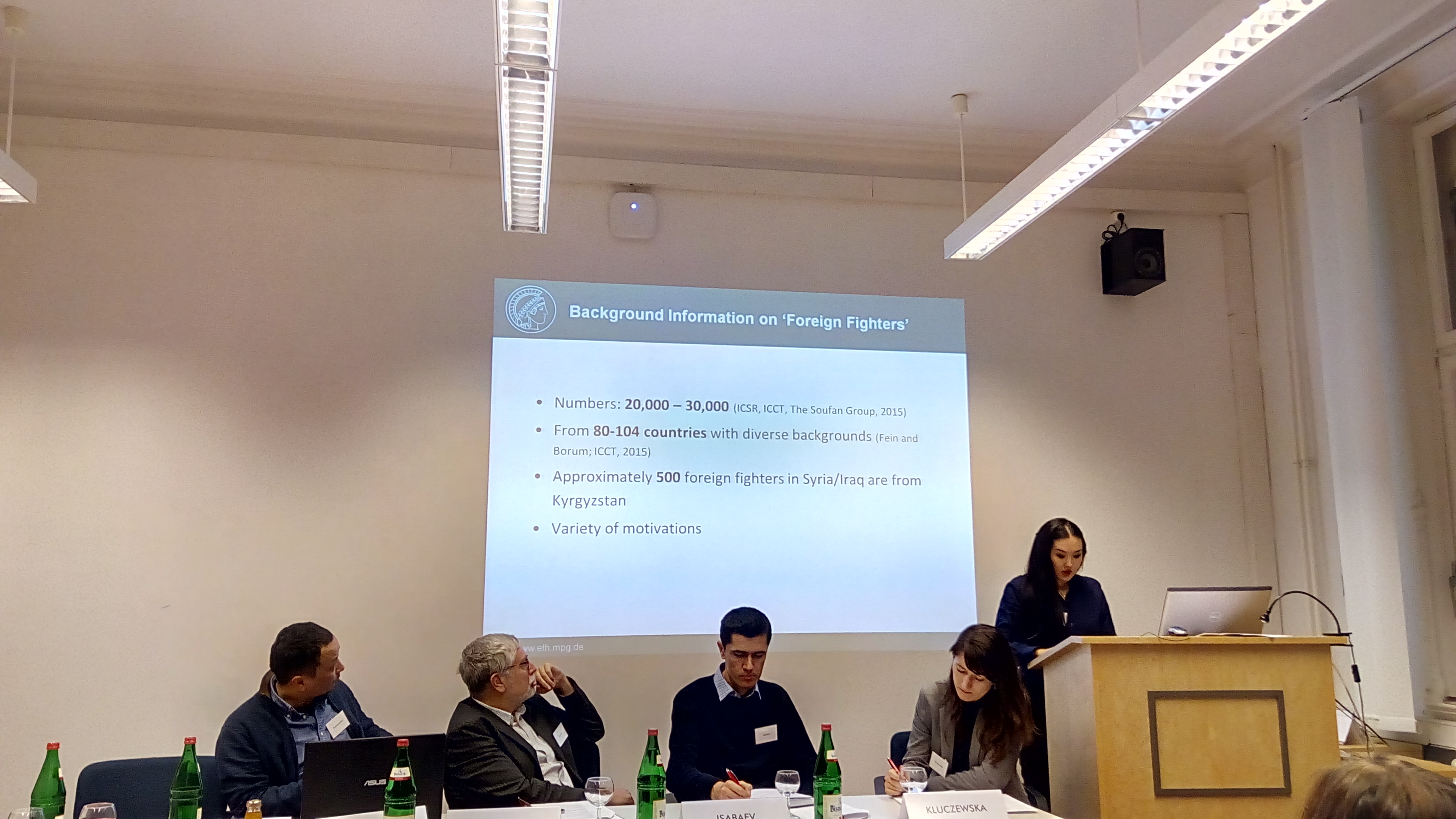 Ms. Karolina Kluczewska, Marie Sklodowska-Curie Research Fellow at the University of St Andrews who is currently based in Tajikistan for field work, spoke about the role of international donors in Tajikistan and how they work with civil society and the authorities, indentifying radicalisation as the “sexiest” topic for research in the country. 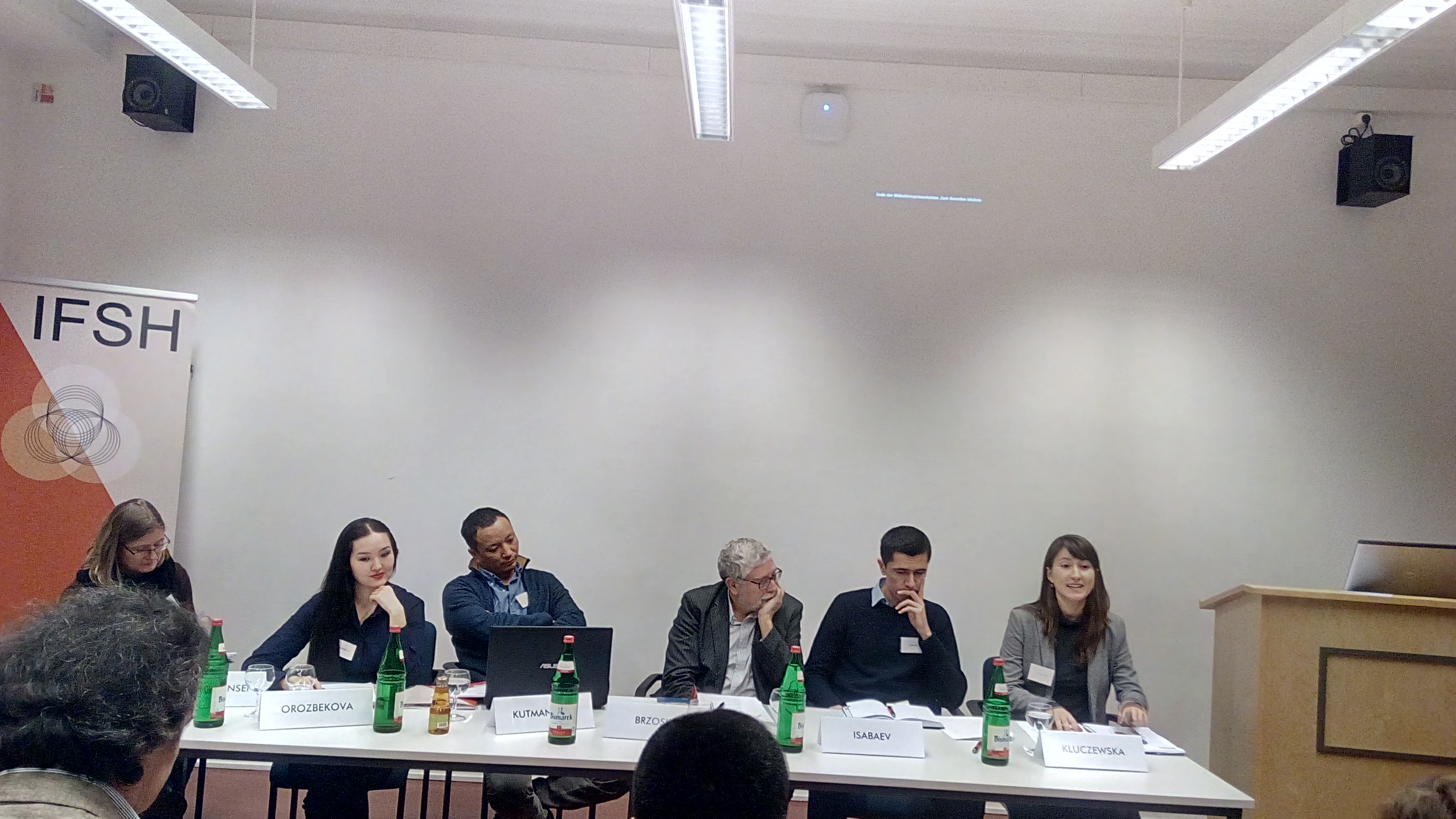 During an academic discussion with Ms. Kluczewska, she elaborated further by mentioning that “there is already a lot of work on radicalization in Central Asia and where it comes from. It is not a big secret that it starts from the socio-economic situation in all Central Asia countries, but this is what is not taking place. All of these actors who gather together in different conferences and then agree to find some projects and then you have the donors and this is how you counter radicalization actually. I think this is not taking place yet because it is too early in Tajikistan. It is now the stage they would agree they would implement the project but their project has not been written yet.”