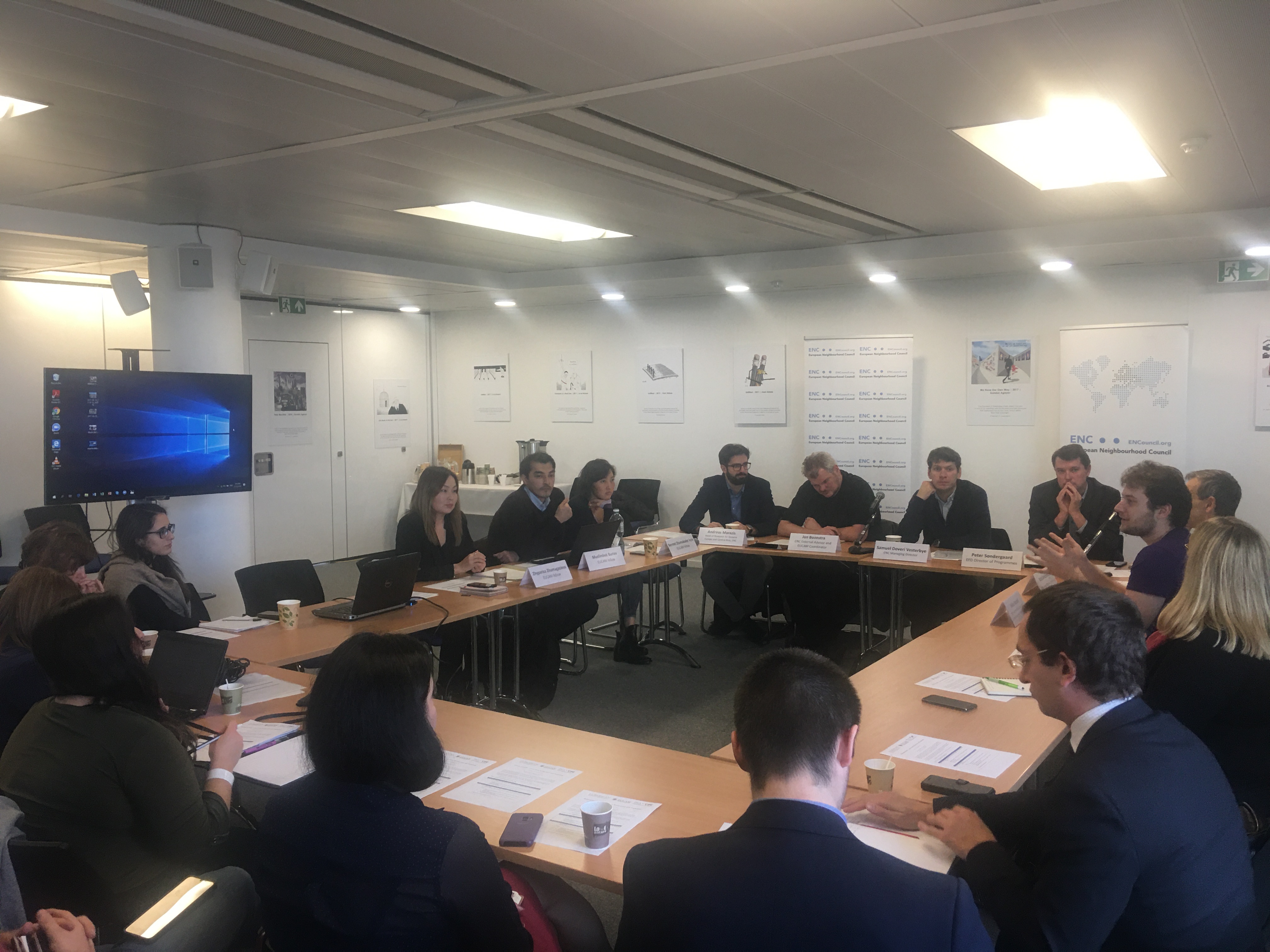 The European Neighbourhood Council (ENC) in close cooperation with its long-lasting partner Europe-Central Asia Monitoring (EUCAM) and with the support of the European Endowment for Democracy (EED) organised a roundtable discussion on Human Security – Cases from Kyrgyzstan and Tajikistan on the 12th of November 2019.  The roundtable offered an opportunity for EU officials and civil society actors to discuss aspects of human security and security sector reform in Central Asia while Europe-Central Asia Monitoring (EUCAM) fellows presented and discussed their research. More specifically, the speakers addressed the legal aspects of internal migration and the privacy-security contradiction in Kyrgyzstan and the status of police reform in Tajikistan. 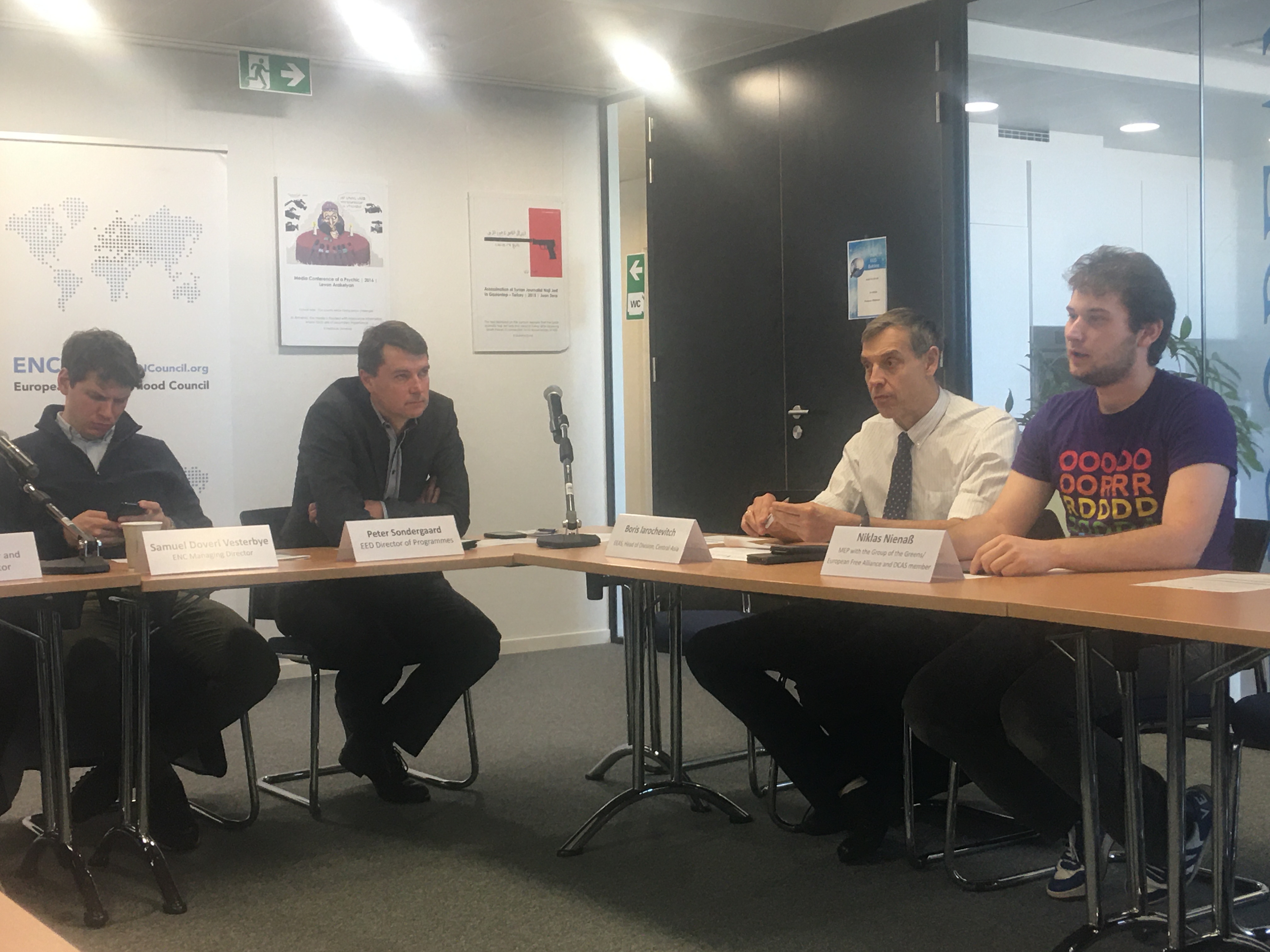 Niklas Nienass emphasized the importance of the involvement of young people in politics, research and activism. He underlined the uniqueness and added value of youth experiences in the context of a changing political and societal environment, namely in the decision-making process. Such experiences have a significant impact by reaching out to other cultures and this applies to Central Asian countries. A multicultural, multi-ethnic and more understanding society is necessary for the future of young Europeans and Central Asians. 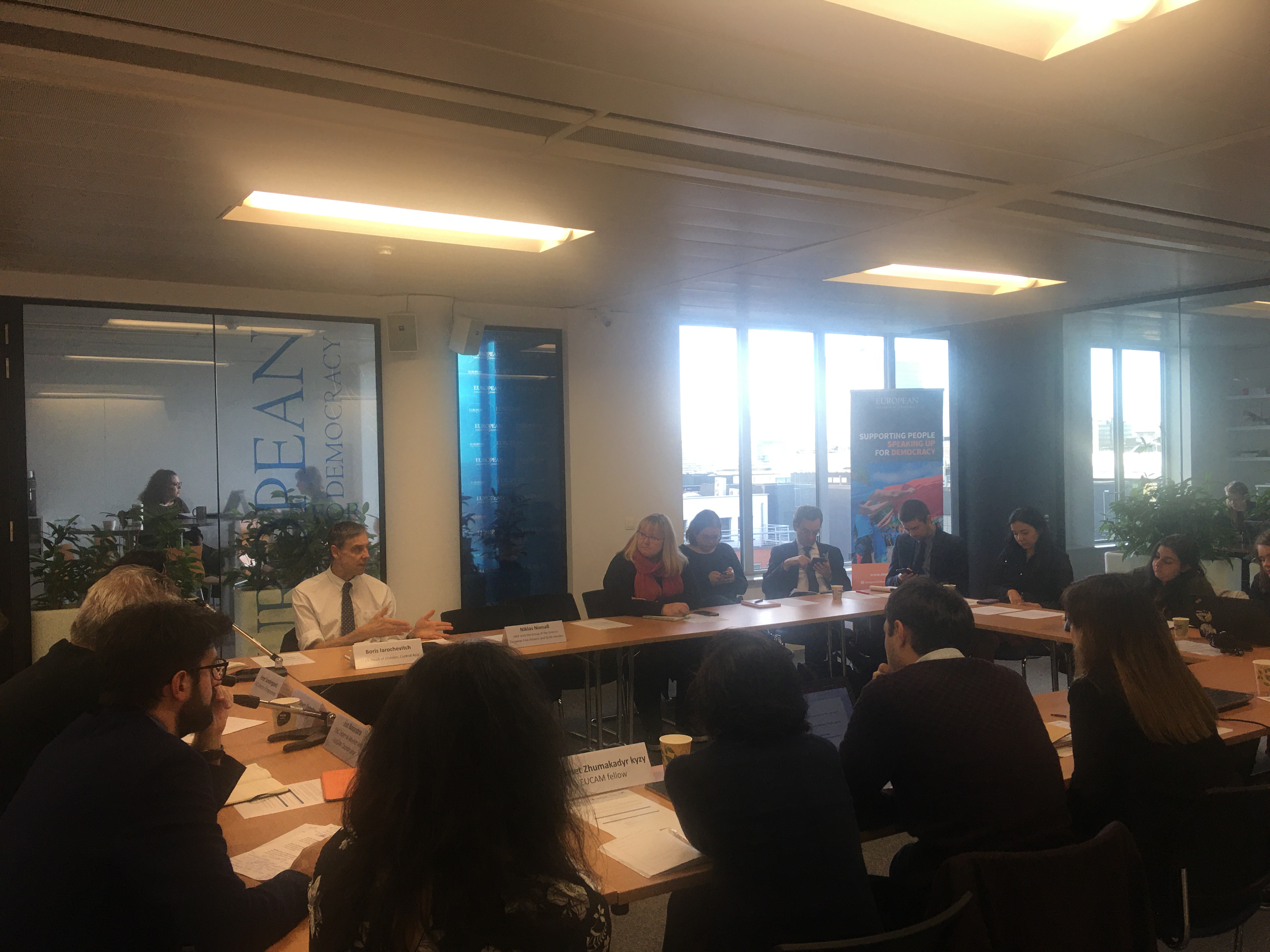 Boris Iarochevitch‘s presentation encompassed an overview of the EU-Central Asia relationship. He explained the new EU-Central Asia Strategy which is built around two main components: resilience and prosperity. This strategy will pave the way for the future of this relationship.  He underlined that the European Commission shares common relevant objectives with Central Asian countries such as climate change, green economy, migration, digital connectivity and media. Along with the new strategy, the EU is also signing multiple Enhanced Partnership and Cooperation Agreements (EPCA) with each Central Asian country. Such partnerships are meant to enhance trade and investment but also political cooperation including conditions with respect to human rights. He also underlined that the EU offers a favourable access to General Schemes for Preferences (GSP) for Kyrgyzstan, Tajikistan and Uzbekistan. Kyrgyzstan also benefits from GSP+.  Finally, he described the topics on which the EU will be focusing with regards to its relations with Central Asia including: first, connectivity as Central Asia is a strategic region ; second, climate change which remains a common issue for both regions and the EU plans to mitigate the negative impacts by investing in green economy and renewable energy ; third, economic development and integration by using trade facilitation, participation of communities and cross-border cooperation. 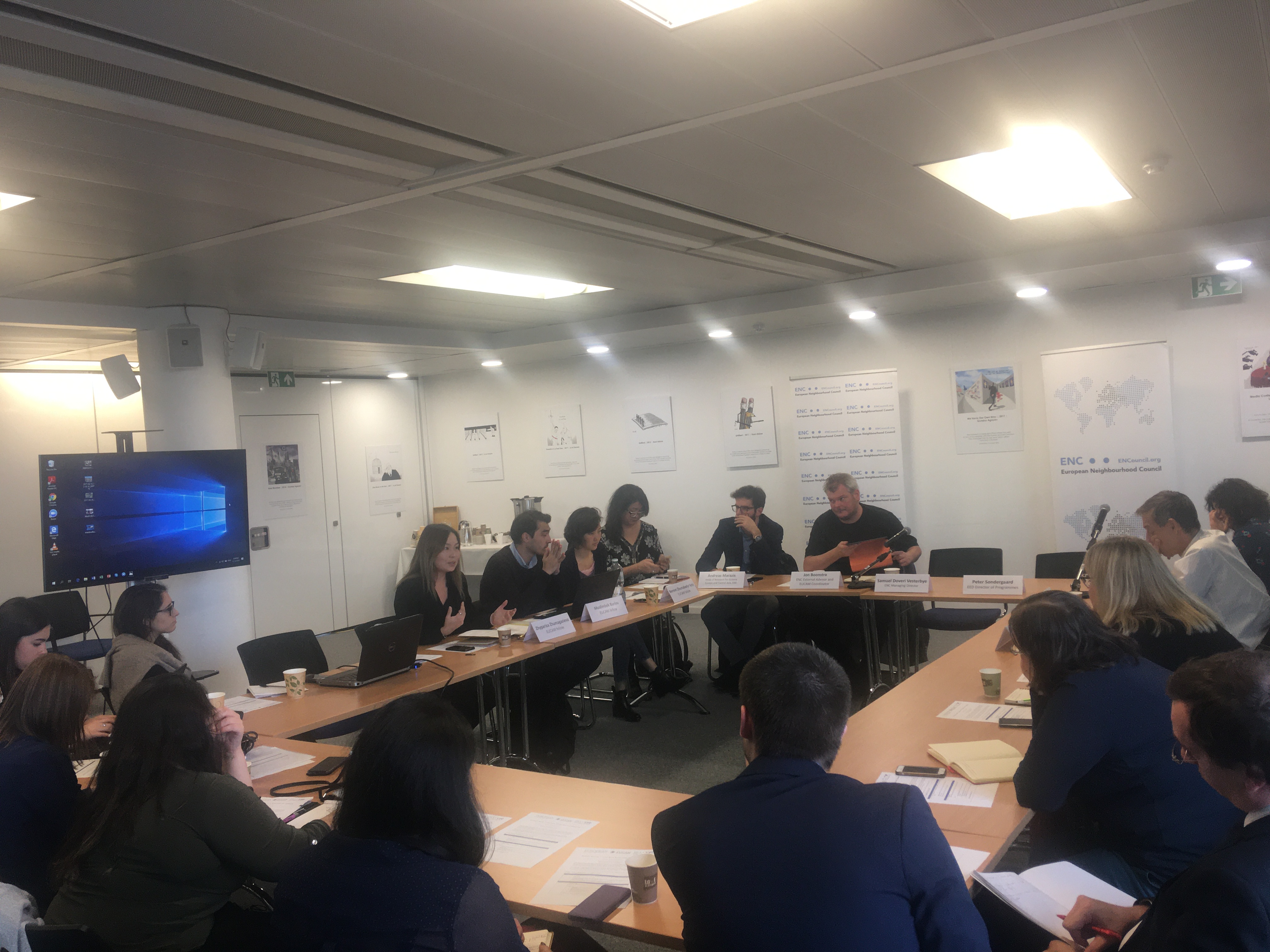 Zhypariza Zhumagazieva started the panel discussion by speaking about internal migration in Kyrgyzstan. She proposed a historical overview of Kyrgyzstan’s internal migration flows by underlining that the main reasons to move are better job opportunities, education and family. She also described the main problem related to internal migration which is the issue of registration at the place of residence. Registration in Kyrgyzstan is the system that records the residence and internal migration of Kyrgyzstan citizens. Every citizen has to register at a place of residence at the age of 16. The current system replaced the prior repressive mandatory Soviet system of “propiska”. As a result, the distribution of the city budget lacked accurate data, the rights of internal migrants are restricted such as social benefits, housing and utility payments, taxes and medical care. In order to solve the problem, national reforms and simplification of registration processes are a must. However, despite this necessity, several challenges remain, including the xpensive implementation of the law and lack of political will. 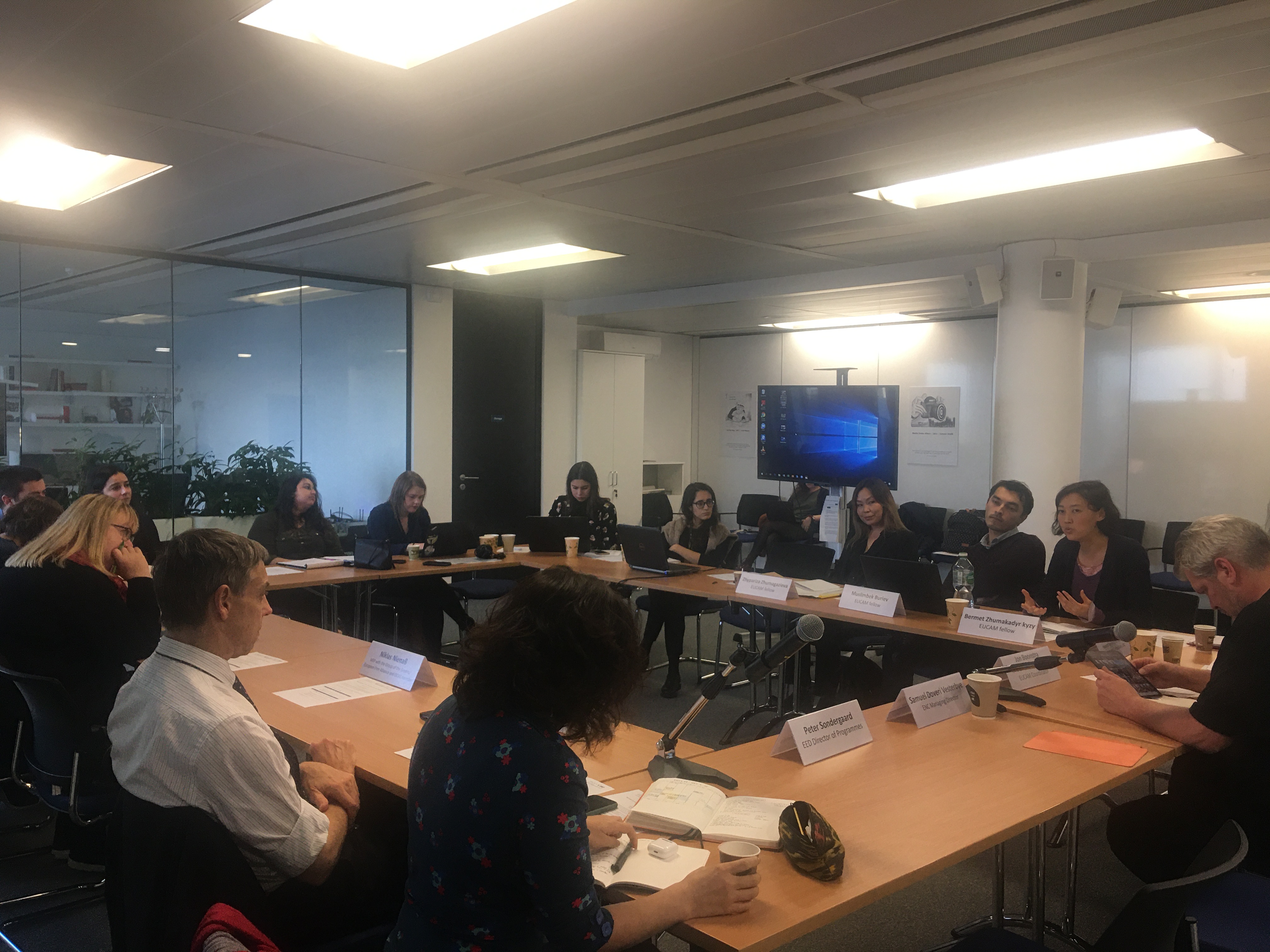 Bermet Zhumakadyr kyzy spoke about the privacy-security contradiction in Kyrgyzstan. People’s privacy rights in Kyrgyzstan are potentially at risk. The lack of debate with regards to the privacy rights in the country offers an opportunity for the civil society to take the lead and frame the debate. The notion of privacy rights has changed through digitization. Technological advances opened unprecedented capabilities for surveillance of people at a massive scale by governments and corporations. Furthermore, any given individual is likely to be unaware that his/her privacy rights are being violated. In fact, for quite some time the scale of impact that tech companies have on our privacy rights went largely unnoticed by the general public all around the globe. Countries like Kyrgyzstan are even further behind compared to Western democracies with regards to the protection of online privacy rights. Additionally, people in countries like Kyrgyzstan have extra layers of vulnerability compared to Western democracies. Unlike in Western democracies, there is less government accountability in a country like Kyrgyzstan with weak rule of law. It is becoming common for newly-elected presidents in Kyrgyzstan to silent critics and imprison political opponents. Besides existing layers of vulnerability, there are recent developments in Central Asian region which are going to alter the digital landscape of the region, namely the Chinese Belt and Road Initiative (BRI). The recenlty-imported made-in-China facial recognition cameras under the pretext of providing safer cities is one example. Since the EU has comparatively stronger data privacy regulations it should share its expertise on the protection of online privacy rights with civil society organisations in Kyrgyzstan. Awareness raising will equip the latter to shape the – so far absent – debate on privacy rights in Kyrgyzstan. 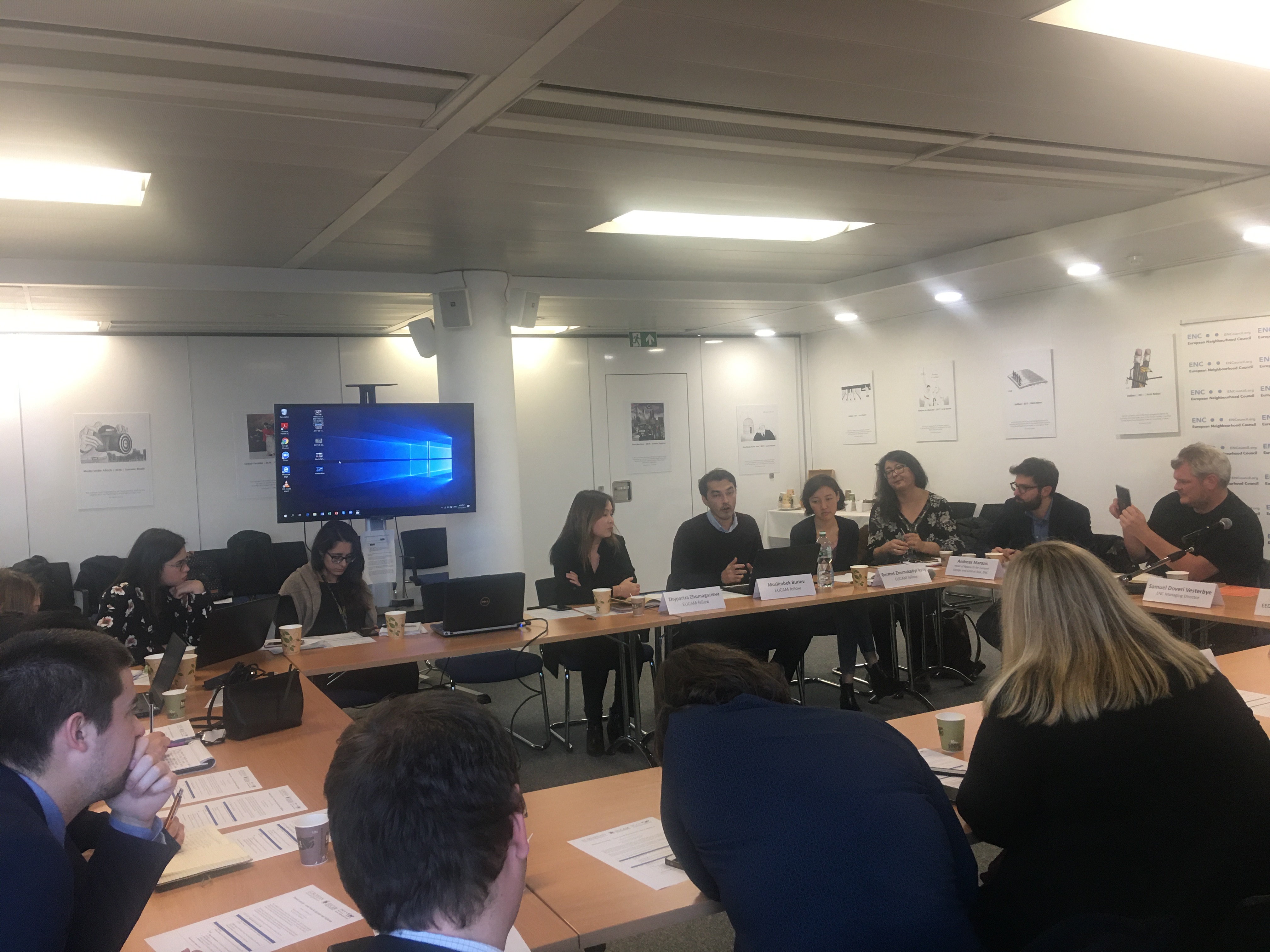 Moving from Kyrgyzstan to Tajikistan, Muslimbek Buriev  provided his insights regarding the status quo of the police reform in Tajikistan. The country adopted a strategy for police reform in 2013 against frequently reported cases of torture and criminal behaviors by law enforcement officers and a low trust to the police among the Tajik population. So far, 32 working groups and 49 centres for public cooperation were organised according to Bureau of International Narcotics and Law Enforcement Affairs (BINLEA), employees of centres for public cooperation were trained by Saferworld and surveillance systems were implemented inside police departments. However, the activities need more time to fully unfold, no actions were made to fight against anti-corruption principles and defend human rights and a communication deficit persists towards the public, non-state actors and international partners. The new strategy on Central Asia mentions the EU’s aim to engage in security sector reforms and cooperation with international institutions. Muslimbek called the EU to establish future planning for development cooperation, launch training courses for police officers, join efforts with the OSCE, contribute to deepen the involvement of Civil Society Organisations (CSOs) including human rights organisations in overseeing the reform progress and provide research-based expertise for expectations analysis and evaluation of the results.