From the 9th until the 12th of September European Neighbourhood Council (ENC) in cooperation with Internews Central Asia office in Bishkek organised a second one-week fellowship training programme – the first one took place in June 2019 in Brussels for a group of Central Asian civil society and media representatives.

The only EU-funded regional project on Preventing Violent Extremism (PVE) in Central Asia, entitled “Contributing to stability and peace in Central Asia through media literacy, improved reporting and regional cooperation” is funded by the Instrument contributing to Stability and Peace (IcSP) and is implemented by Internews.  The project is focused on national and regional efforts to prevent radicalisation in Central Asia through increasing the capacity of journalists, teachers, civic activists and media professionals (through training activities, workshops both on national and regional level, and innovation laboratories) in the production of high-quality media content and raising the level of critical media consumption of representatives of civil society, decision-makers and ordinary public. As part of the project, Internews provided PVE fellowships to 11 young media and civil society experts from Central Asia.

On the 9th of September, the 2nd fellowship group, composed by six Central Asians coming from Kazakhstan, Kyrgyzstan, Tajikistan and Uzbekistan, met with Jack Parrock (Brussels Correspondent for Euronews NBC) while he was doing live streaming reportage in Schuman about Brexit. They had the chance to access Euronews Press Room and get a taste of how a big media and its reporters operate. In the afternoon, they attended a training with academics, journalists and ethics officers at ENC’s premises. The session dealt with the ethical boundaries of covering violent extremism in contemporary journalism.

Dr. Trisha Meyer (Postdoctoral Researcher at the Institute for European Studies and Assistant Professor at Vesalius College of Vrije Universiteit Brusssel (VUB)), explored the different ethical values that media organisations and professionals might take into consideration while reporting. She presented the various ethical frameworks that establish the ways in which decisions might be taken and illustrated her thoughts by sharing the Breivik example. Aidan White (President of the Ethical Journalism Network) focused on the importance of ethical journalism and particularly in the context of the rise of artificial intelligence. As for what needs to be done, he suggested that further engagement with the audience and more investment in computational journalism are the keys for a better future.

Alissa de Carbonnel (European Security Correspondent at Reuters) shared her own experience on media coverage in dealing with the prevention of violent extremism in the region and in Brussels. She underlined the various difficulties that a journalist might face while reporting on sensitive issues. Jack Parrock concluded the session by enhancing the idea of distance while publishing stories and the importance of digital engagement as a vector of success in journalism. 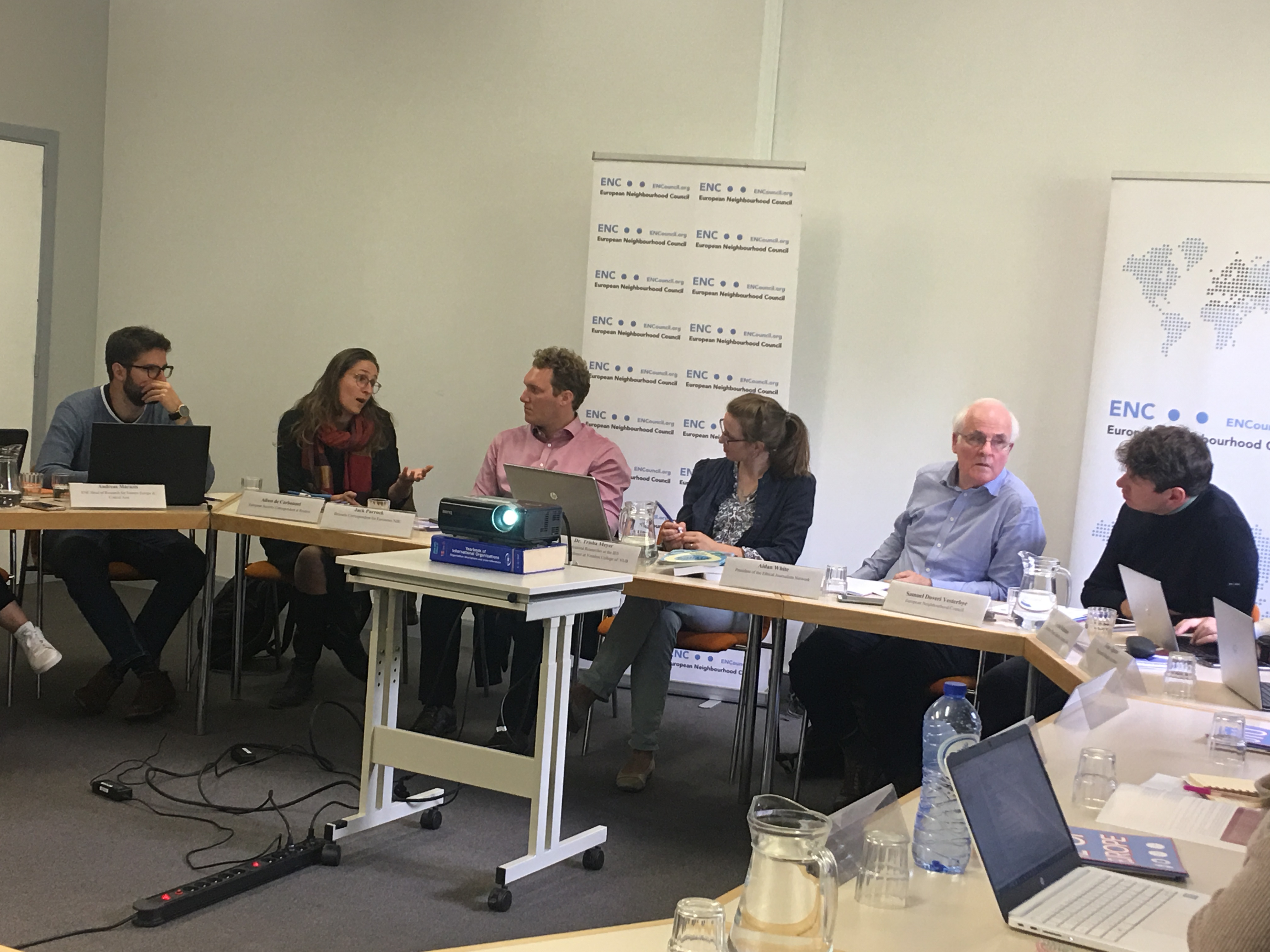 The following day, the six fellows had an informal exchange with Marc Fiedrich (FPI2 Head of Unit, European Commission)  during which they informed him about the main issues in their respective countries concerning violent extremism and the restrictions in terms of reporting such topics. The meeting was followed by an expert roundtable discussion on how to tackle radicalisation in wider Europe through education. Among the distinguished panelists were Sophie Picavet (Senior PCVE Expert, Counterterrorism Division, EEAS), Karin Heremans (Principal of the Royal Atheneum school in Antwerp & co-chair of Radicalisation Awareness Network – RAN Working Group about education) and Silviu Piros (Head of Educational Development Unit and  Doctoral Researcher in Education Diplomacy at Institute for European Studies, VUB).

Sophie Picavet provided an overview of the measures taken by the European Union (EU) for preventing violent extremism. The EU has developed a counter-terrorism strategy to combat terrorism globally while at the same time respecting human rights. The strategy addresses the root causes of radicalisation and terrorist recruitment as a key priority. It was revised in 2014 to adapt to evolving trends, such as foreign fighters, and the use of social media by terrorists. As a reaction to the violent attacks on Charlie Hebdo in 2015, the EU has supported a European plan against violent extremism. Apart from the Strategy, the European Commission has set up a steering board for Union actions on preventing and countering radicalisation. The European External Action Service (EEAS) is in charge of developing security dialogues with governmental and civil society partners across the globe.

On the multilateral level, the United Nations (UN) has published a Plan of Action to Prevent Violent Extremism, which encourages the international community to have a comprehensive approach that is not only security-based, but also addresses the underlying conditions that drive individuals to radicalize and join violent extremist groups. However, it is not very easy to act globally on terrorism, since  there is no clear-cut and general definition: it largely depends on how it is perceived by an individual country.

Karin Heremans clarified the important role of education in preventing violent extremism. RAN aims to build bridges between practitioners and other stakeholders and between the EU and its Member States. The organisation has created a manifesto for education, in which they plea for an integrated comprehensive approach for dealing with radicalisation and building resilience, where schools, social partners, civil society, mosques, parents, and law enforcement are involved. She referred to Johan Declerck’s prevention pyramid, which proves that governments need to invest equally in the broad societal context of human beings and in security issues that tackle and prevent the problems. RAN promotes communication trainings for teachers, which include an umbrella approach that consists of investing in a positive communication as a way to have a counter-narrative against extreme ideologies and practices.

Silviu Piros explained that higher education is also used for EU Foreign Policy goals to tackle radicalisation. By accepting exchange students from third countries and building bridges between international higher education institutions, other higher education systems become adapted and comparable to European universities. Initially, these measures were taken to prepare for EU enlargement, but because of its success, the initiatives are now also implemented in the EU’s European Neighbourhood Policy. For example, VUB participates in campus programmes with three other European Universities and six universities from Moldova, Ukraine and Georgia. Together, they focus on innovation, innovative digital learning and they have set up different institutes for European Studies. In another mentioned example 60 students from EU and non-EU countries have to work together on a project for an entire year.

The discussion about RAN’s activities and initiatives resumed in Antwerp where the fellows were invited by Karin Heremans at the Royal Atheneum school to attend a private training with representatives by RAN working groups on youth, education and communication and learn about initiatives taking place at the municipal level. 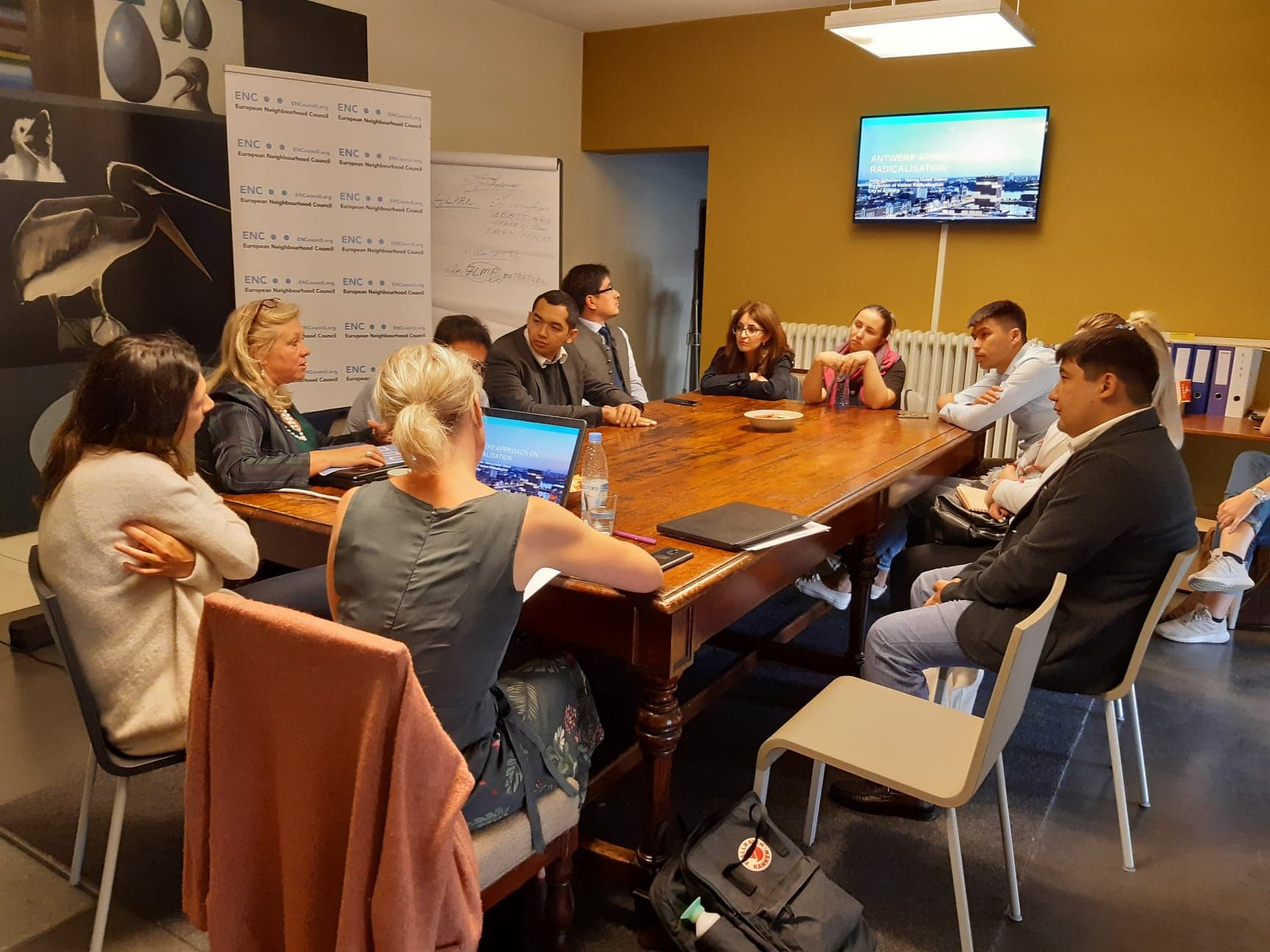 On September 11, ENC and Internews, supported by the European Endowment For Democracy‘s (EED) organised a final public event during which the findings of Internews’ Phase 1 project on PVE were presented. The host, Peter Sondergaard (EED Director of Programmes) opened the floor while Marc Fiedrich (FPI2 Head of Unit, European Commission) and Samuel Doveri Vesterbye (ENC Managing Director) highlighted the need to support such initiatives while the latter emphasised the increasing need for media literacy, EU literacy and source literacy trainings.

Fahrod Rahmatov (Internews Central Asia office Project Director) and Timur Oganov (Internews Central Asia office Project Manager) presented the achievements, research findings of the project and the impact the latter had based on statistics while Ibrohimjon Mullojonov talked in-depth about his individual experience with the project “My new family”, an Internews-funded initiative.

For the project’s first research question, they analysed the information ecosystem in Central Asia regionally. The research aimed to identify the local drivers of extremist sympathies, pertinent information flows, trusted sources of information, and what types of support are needed in order to amplify respected, moderate local voices. The second research question answers how radical terrorist groups are using and disseminating on social media their narratives. The project focuses on two main parts: capacity-building for journalists, activists, and representatives of governmental agencies and increasing the level of critical media consumption by active citizens, media professionals, and representatives of governmental agencies.

To accomplish the second research objective, Internews had to implement a great deal of activities to both build capacity and to increase the level of critical media consumption. For the first objective, twenty training were organised, 96 media officials and civic activists attended two innovation labs, ten reporting trips were organised for journalists, ten regional innovative projects were supported, and finally, 17 media outlets received support to increase audience and community engagement. To increase the level of critical media consumption, Internews developed one regional online information campaign, two “eduthons” were created for 62 university and high school teachers, five fact-checking tools were established, and they held two regional forums to promote national and regional cooperation on enhancing dialogue and contributing to the elimination of the causes of radicalization. Lastly, ten fellowships were awarded to interested young media professionals that work on preventing violent extremism.

Ibrohimjon’s TV show project “My New Family” is a social experiment that includes young people of Kyrgyz and Tajik border villages spending some time as neighbor family members. The traditional and social media coverage shows that eventually they learn about each other’s culture and relationships by participating in family events, attending religious events, etc. Eventually, these peaceful co-existing experiences will reduce the impact of radicalization in border communities and other areas of Kyrgyzstan and Tajikistan.

The current phase of the project will be concluded by September 30th but the 2nd phase has already been approved by IcSP. Stay tuned for more news about Central Asia, fellowships and trainings related to PVE, media and EU literacy.

For more information about the presentations and the research outcomes of Internews’ project see below:

Contributing to Stability and Peace in Central Asia: Through media literacy, improved reporting and regional cooperation

Contributing to Stability and Peace In Central Asia: Targets and Results