New EU Strategy on Central Asia: new prospects for synergies between European Union and Turkey in the region

Last year, the European Union adopted its new Strategy on Central Asia “The EU and Central Asia: New Opportunities for a Stronger Partnership”, which provides a new policy framework for EU’s engagement with the countries of the region. This Strategy aims to forge a stronger, modern and non-exclusive partnership with the countries of Central Asia so that the region develops as a sustainable, more resilient, prosperous, and closely interconnected economic and political space. The Strategy focuses on promoting resilience, prosperity, and regional cooperation in Central Asia with a strong emphasis to closer synergies and cooperation also with other partners, both international organisations and individual countries. Promoting resilience, development and prosperity in Central Asia is also one of the key interests for Turkey, a close neighbour and important partner for countries of the region.

On the 23rd and 24th of January, an EU delegation led by the EU Special Representative for Central Asia Ambassador Peter Burian and comprised by Dr. Fabienne Bossuyt, ENC Academic Council Member and Assistant Professor at Ghent University, Samuel Doveri Vesterbye, ENC Managing Director and Andreas Marazis, ENC Head of Research for Eastern Europe and Central Asia, visited Ankara for a round of consultations with Turkish researchers and officials.

On the 23rd, the Centre for Eurasian Studies (AVIM) in cooperation with the Delegation of the European Union to Turkey,  hosted a roundtable discussion. The aim of this meeting was to bring together European and Turkish think tankers and researchers to discuss, what are the communalities of the EU and Turkey’s interests in future development of Central Asia, looking for possible synergies and prospects for closer cooperation between the EU and Turkey in the region. 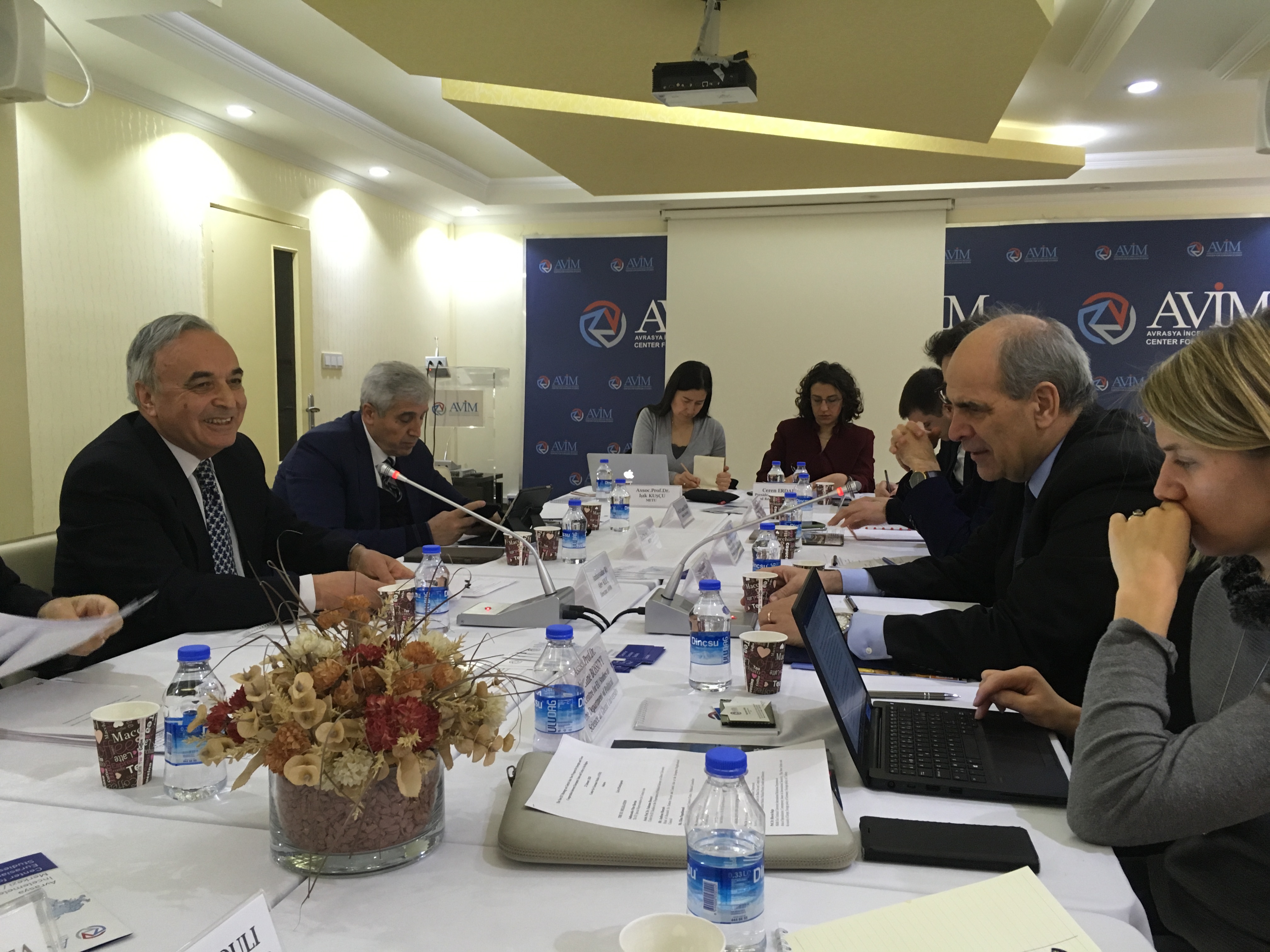 Academics from Middle East Technical University, from TOBB-ETU University – represented by our academic council member Prof. Dr. Saban Kardas – AVIM senior analysts, as well as representatives from the Presidency for Turks Abroad and Related Communities were present in the meeting, sharing their interpretation of the new EU Strategy on Central Asia and posing several questions to Amb. Burian and his team.

AVIM’s Director Ambassador Alev Kilic and AVIM’s Advisor Ambassador Yigit Alpogan opened the floor with their welcoming remarks. They provided their own geopolitical analysis and highlighted the importance of Central Asia for Turkey and posed questions regarding the role of Turkey in the new strategic document of the EU for the region. 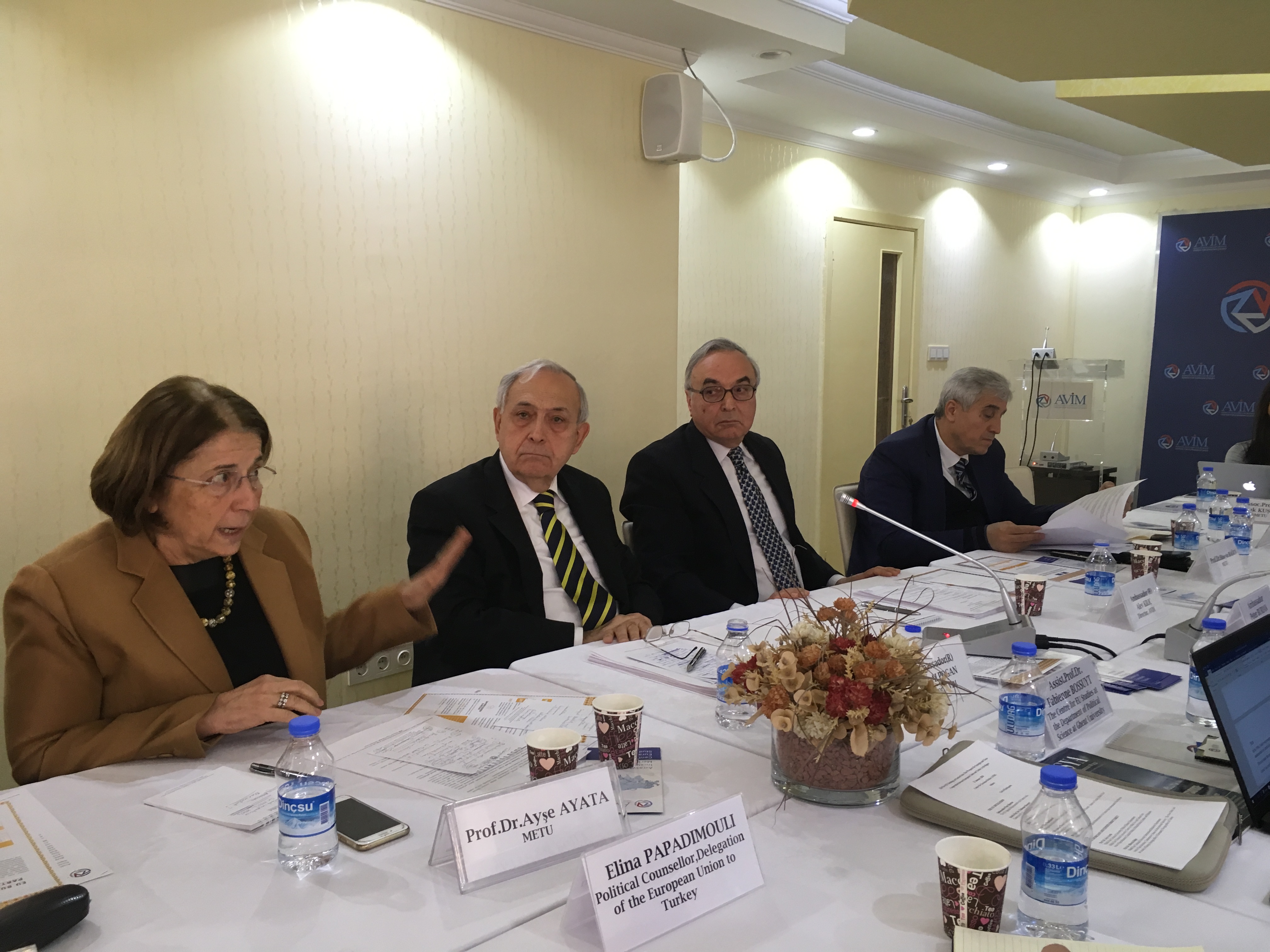 EUSR Peter Burian presented in detail the new Strategy and pointed out the priorities of the EU in the region. He emphasized the importance of consultation meetings with strategic partners like Turkey focusing on how to better implement the new Strategy, since the latter serves as the basis for tactical European Commission planning before the new Multiannual Financial Framework 2021-2027 is in place.

Several academics and researchers from Turkey highlighted the importance of connectivity with Central Asia – especially people-to-people – since more than 5,000 Central Asians study in Turkish Universities, raising concerns about brain drain phenomenon in the region. They were interested on whether the new Strategy has a different approach towards Turkey, on the role of Iran and if energy is still top priority. Prof. Dr. Ayse Ayata from the Middle East Technical University stressed the fact that in terms of funding opportunities (e.g. Horizon framework) there are not so many projects on creating networks. 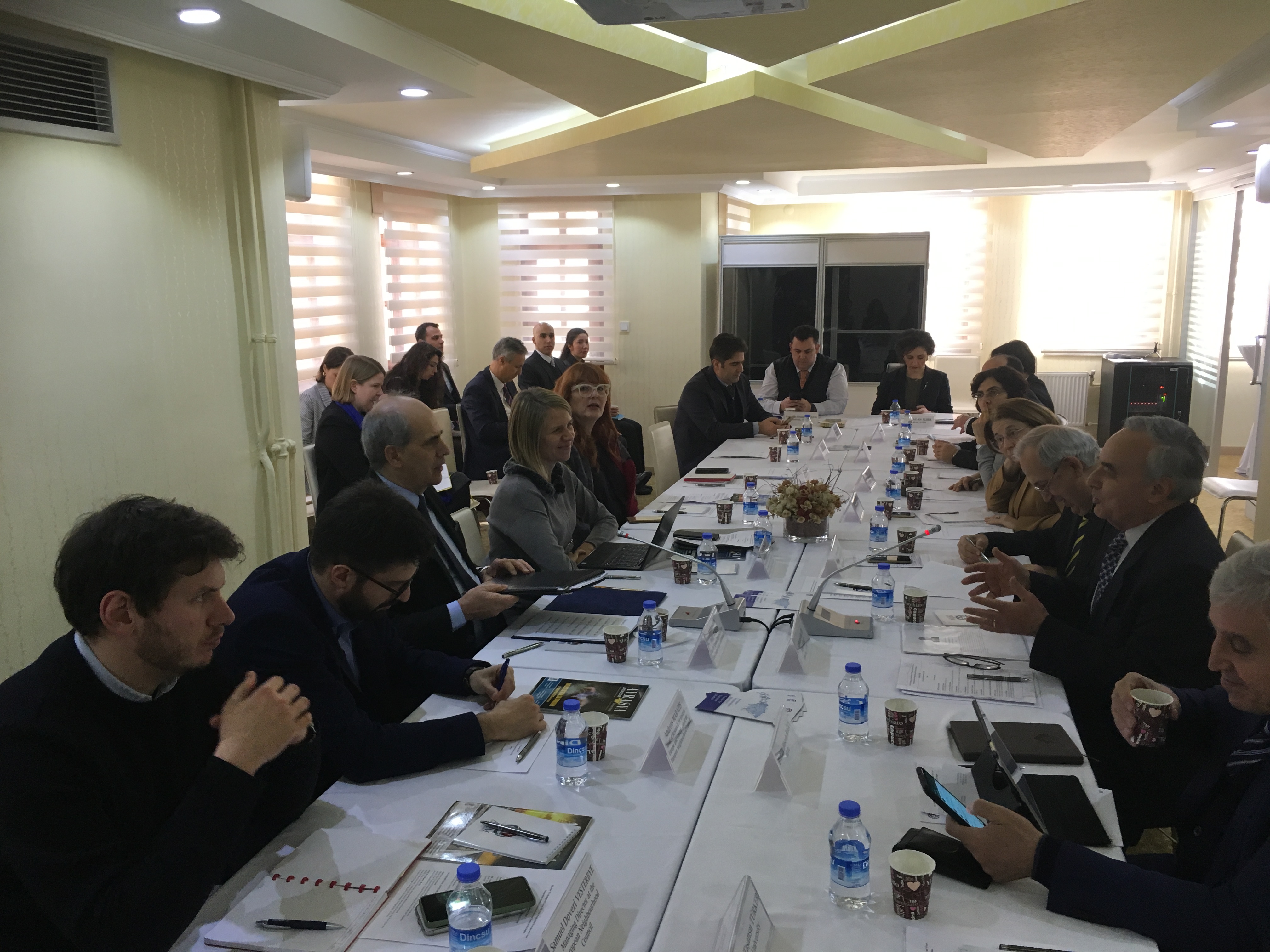 Regarding networking opportunities, ENC Managing Director Samuel Doveri Vesterbye mentioned that a combined EU-Turkey-Central Asia fellowship program is being developed. He also highlighted the need for more EU funding for projects on Preventing/Countering Violent Extremism (PVE/CVE) with the involvement of Turkey and the five Central Asian Republics in order to share best regional practices and coordinate in preventing radicalisation.

Dr. Fabienne Bossuyt focused on the latest geopolitical developments in the region, including on the role of Russia and China, especially in the context on the Belt and Road Initiative (BRI). 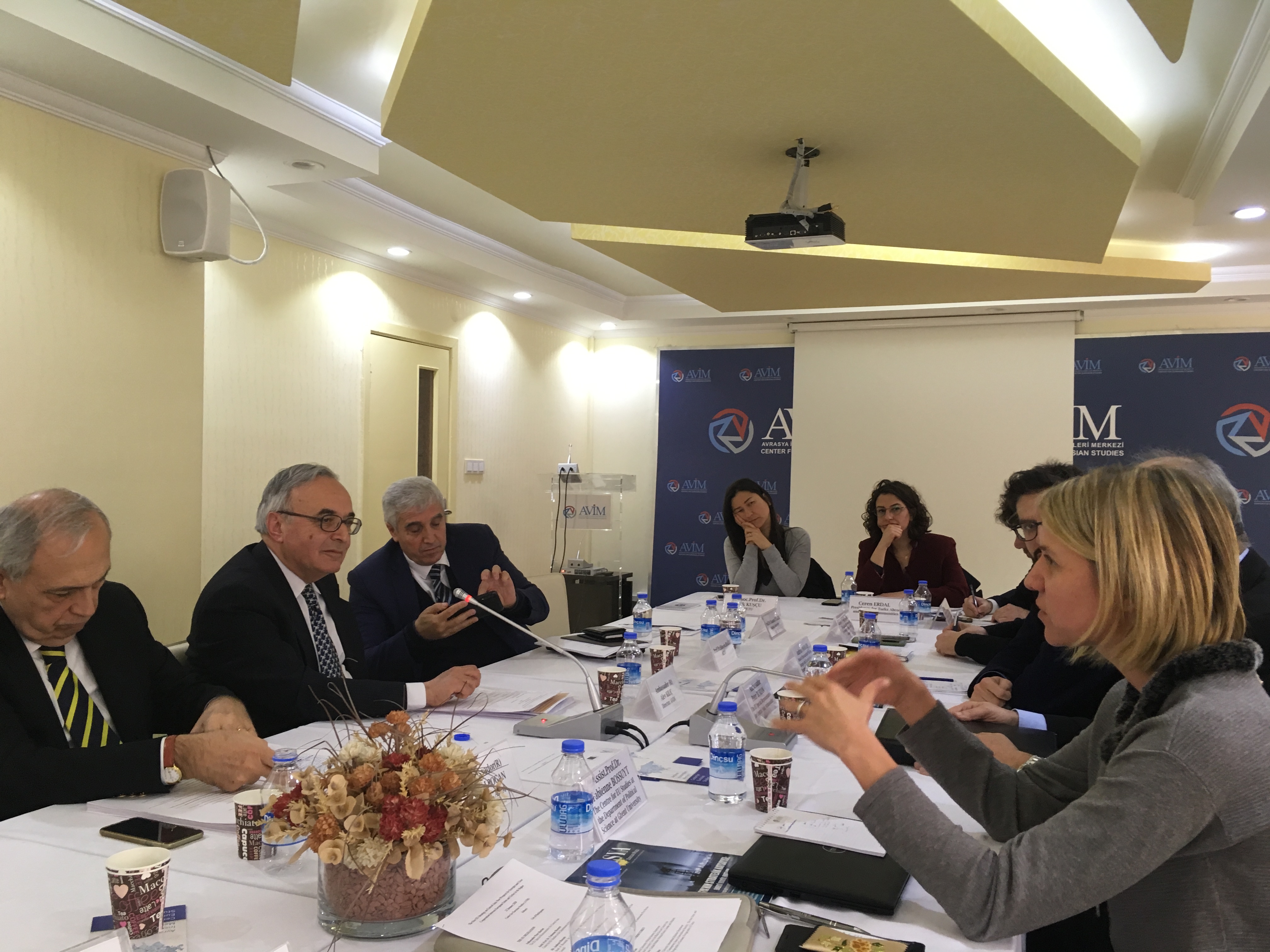 Andreas Marazis contributed with lessons learnt from Eastern Partnership countries (EaP), what went wrong and what could work with Central Asia including the role that Turkey can potentially play. Among other things he mentioned that a major issue, not only among EaP countries but also in Central Asia and in countries with which the EU has special agreements in place, is that most of the reforms taking place have not been felt yet by ordinary citizens and whatever changes are taking place are not necessarily associated directly with the EU. Increased visibility and communicating the benefits of AAs, DCFTAs, EPCAs are of paramount importance for the EU and the partner countries.

Several times during the roundtable discussion the Turkish researchers and academics questioned the role that Turkey might have. Following Ambassador Burian’s strong interest for Turkish presence in the first ever EU-Central Asia Economic Forum – scheduled to take place during July 2020 in Bishkek, Kyrgyzstan –  Andreas Marazis stressed the importance of trainings for Central Asian SMEs and entrepreneurs with the involvement of counterparts from Turkey and EaP countries.

Regarding intra-regional trade and the development of SMEs there is huge untapped potential in Central Asia. When it comes to SMEs or exporting to the EU several instruments are in place, for example the Generalised Scheme of Preferences (GSP+) which provides, after the ratification of 27 conventions (including conventions on human and labour rights, environmental protection and good governance) generous access to the EU market by allowing complete duty suspension of all EU tariff lines. Among the EaP members Armenia is one of the beneficiaries with a GSP+ utilisation rate as high as 91% Going back to Central Asia, right now we have Kyrgyzstan being the only beneficiary of GSP+ in the region, Uzbekistan has applied for it and Tajikistan is considering it.

The case of Kyrgyzstan shows us that obtaining the status is one thing, utilising it properly is a different story. Proper training of public administration regarding the paperwork needed and access to information for SMEs in order to obtain the necessary certifications (ISO, storage safety etc.) are important in order to benefit from the GSP+ status. In that case the examples of Turkey and/or Georgia, Ukraine and Armenia, as countries with experience in absorbing EU’s aquis will be helpful and should be at least taken into consideration as a starting point for closer cooperation among European, Turkish and Central Asian researchers and academics.