Opening accession talks with Albania and North Macedonia: lessons of the past

Opening accession talks with Albania and North Macedonia: lessons of the past

On the 13th of June, The Think Visegrad Platform, European Neighbourhood Council (ENC) and Open Society European Policy Institute (OSEPI) organised a panel discussion about the possibility of opening accession talks with Western Balkans’ candidate countries Albania and North Macedonia. Since the European Council will discuss this topic on the 18th of June, a panel of distinguished speakers debated the attitude of the EU Member States and the expectations from both sides. 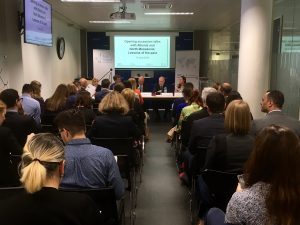 H.E. Suela Janina, Ambassador of Albania to the EU, and Mr. Vlatko Stankovski, Deputy Head of the Republic of North Macedonia to the EU opened the floor by sharing their views on the issue. Both speakers highlighted the fact that the European Commission has assessed that the countries made the necessary progress to start accession talks. The past two years, progress reports from the European Commission have shown that North Macedonia has improved its regional relations with Greece and Bulgaria. While the former experienced positive changes at the political level, Albania’s progress was of a judicial nature.

At the same time, both speakers understand that political considerations need to be taken into account as well. The question arises whether the EU is ready to consider Albania and North Macedonia becoming part of the European family. Nevertheless, whatever the end result might be, it is certain that it will affect the future of transformational reforms in the Western Balkans, the EU’s credibility towards third countries and its geopolitical interests in the region. As H.E. Suela Janina pointed out: “The glue that keeps us together is the European region, which is also of interest to the EU.” 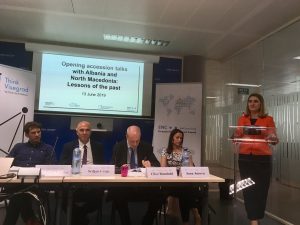 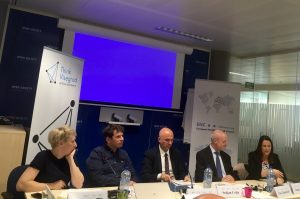 Mr. Rumbold explained the relation between the European Council’s decision and the credibility of the EU in a broader perspective. Within the EU, two important complementary events indicate that the EU and the Western Balkans could benefit from a positive answer. Last year in February the European Commission came forward with a Strategy on the Western Balkans. This document reconfirmed that the future of EU accession will be politically and economic advantageous for both sides and that regional cooperation and reconciliation reforms are necessary. Secondly, the priority agenda for enhanced cooperation is agreed upon by the European Council. During the same summit, there was an understanding that anchoring the region to the EU is essential for investment in peace, security and prosperity. There is also a strong emphasis on the rule of law, a strong functioning of democratic institutions, and actions against crime and corruption. The European Council agreed in both cases to set up a path for accession negotiations. Those conclusions listed specific recommendations and conditions.

Ms. Szpala focused on the fact that the success stories of EU membership have been under discussion for quite some time now. Last year, only 13 out of 28 countries supported the last document on opening accession negotiations for Albania and North Macedonia, which reflects how EU Member States view the commitments and the credibility of EU Enlargement Policy. According to Ms. Szpala, the EU is obliged to fulfil its commitments to the Western Balkans: “Countries that deliver and implement reforms should be rewarded.” In case accession talks aren’t granted to Albania and Macedonia, a honest discussion will have to take place within the EU. Without the EU’s necessary sticks and carrots, the Western Balkans cannot be stabilised any longer. 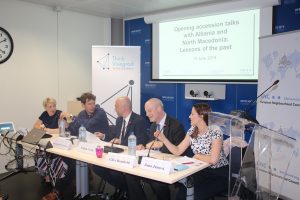 Mr. Svijic discussed further the sceptic demeanour of the Member States towards EU enlargement. Some older Member States believe that the newer Member States weren’t ready yet to be part of the EU. However, there is little evidence to assume that the quality of democracy of these future accession countries will improve by letting them wait much longer. Particularly, Turkey has become less democratic in the meantime. With regards to Albania and Macedonia, three countries have made clear reservations: France, the Netherlands and Denmark. Whereas the last two countries are sceptic because of the countries’ corruption levels and possible criminal networks, France’s issue against opening accession negotiations is existential, since it would like the EU to reform first on issues such as asylum and defence. It is probable that the countries’ reservations are more dictated by electoral fear than valuing democracy and the rule of law. In addition, Germany will not be able to make a decision, because the Bundestag had little time to discuss the enlargement package.

Mr. Doveri Vesterbye gave insights on lessons learnt from previous accession talks with Turkey. Recently, accession negotiations have become more complicated because of the consequences of economic crises, the rise of populism and the performance rate of European Neighbourhood Policy countries has not been positive either. As a result, one case after the other has gone unresolved. In addition, Mr. Doveri Vesterbye mentioned some important points that might disturb the process of accession talks. The first element that needs to be taken into consideration, is the degree of support from the European Parliament. The actual voting weight of Albania and Macedonia, trade and energy relations will affect the negotiations as well. Because of the recent changes in the European Commission, the Multi-annual Financial Framework and the European Parliament, the possibility of accession talks can change for the better or worse. The potential disruptive elements from regions and Member States can change everything, which has proven to be true in relation to Cyprus and Turkey. Yet a country’s possible membership to NATO does not seem to be as important anymore. For Turkey, Euroscepticism and popularity do not have an impact of accession negotiations or how the government liaises with the EU. In this case, the government steers what the public thinks. Trust and lack of trust play a bigger role according to diplomats. The more things are postponed, the less trust there eventually will be.