Roundtable Discussion on Cyprus and energy – an exchange of views

Roundtable Discussion on Cyprus and energy – an exchange of views 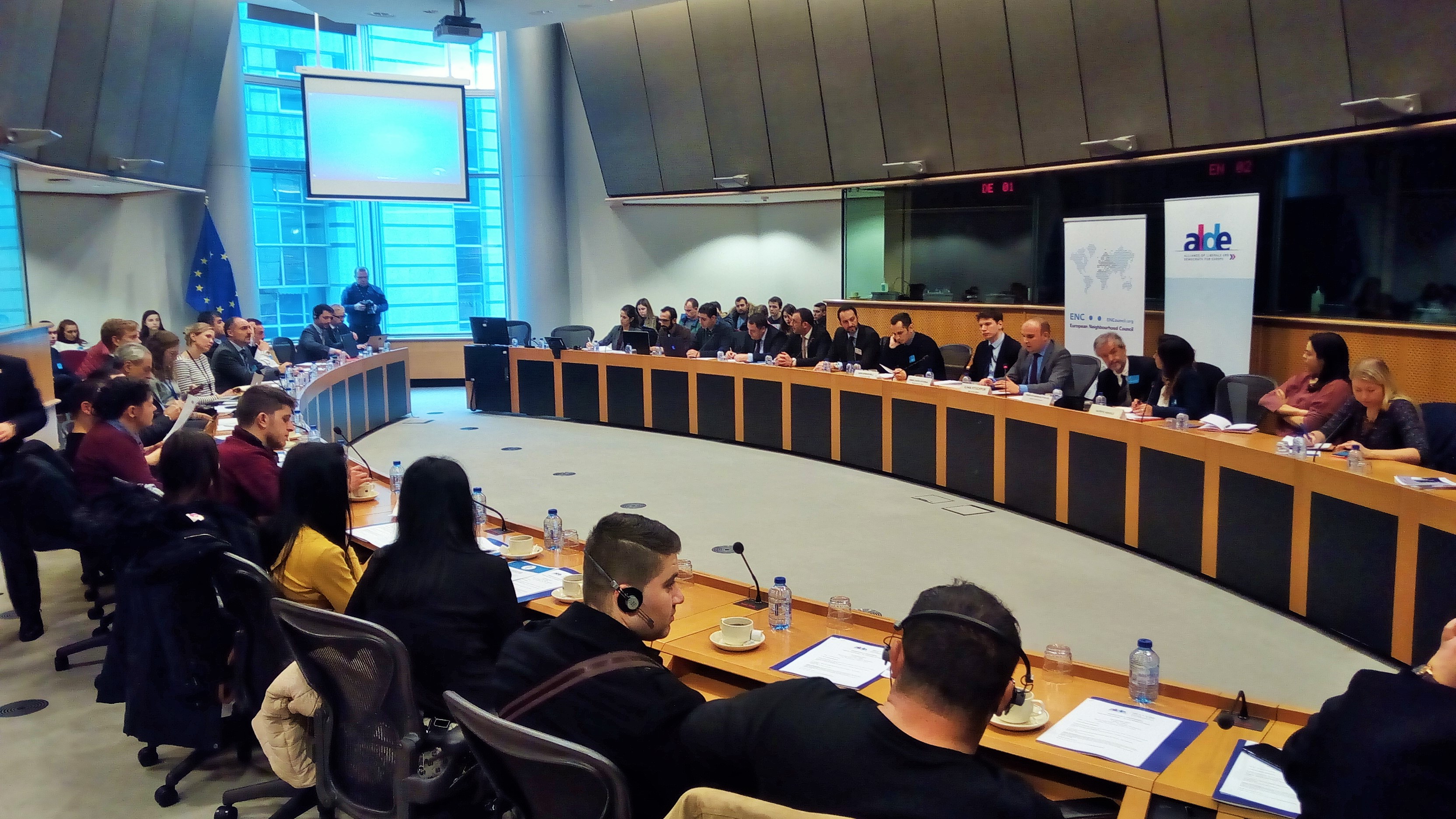 The European Neighbourhood Council (ENC) held a European Parliamentary Roundtable Discussion with experts, academics and private sector representatives on the 24th of January 2017.

To foster an exchange of ideas and to advance new methods of cooperation on energy across the East Mediterranean, the Parliamentary Roundtable brought together both representatives from the North (Turkish Republic of Northern Cyprus) and South of Cyprus (Republic of Cyprus), as well as high level officials from the European energy community. 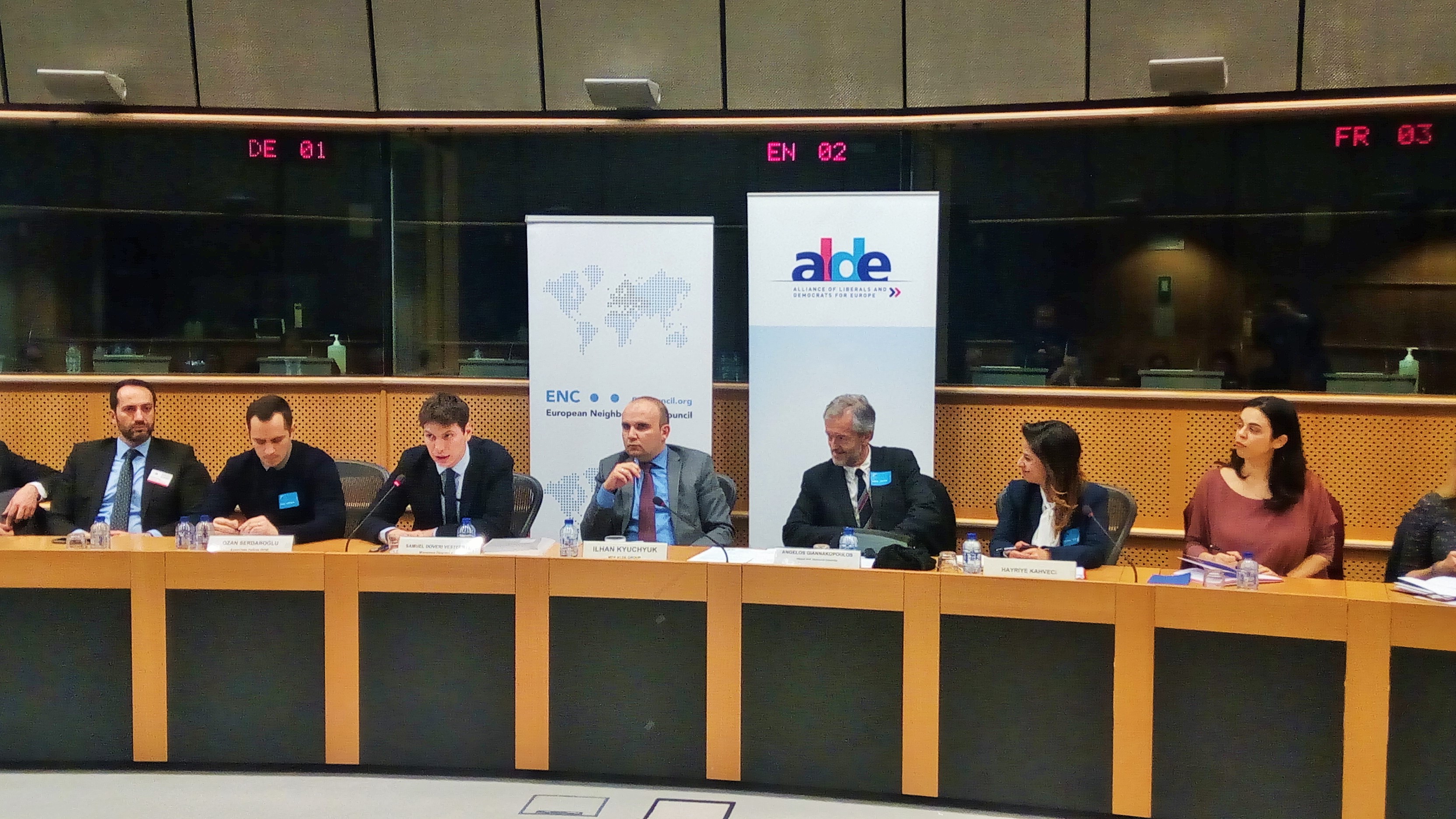 Due to conditions of anonymity held during the Roundtable Discussion no direct comments will be attributed to comments or Q & A remarks made during the event.

The speakers spoke about energy discoveries, including the Zohr gas field off the coast of Egypt, Aphrodite gas field in the Republic of Cyprus’ Exclusive Economic Zone (EEZ) and the Leviathan gas field, off Israel’s coast, as the main players for energy development. 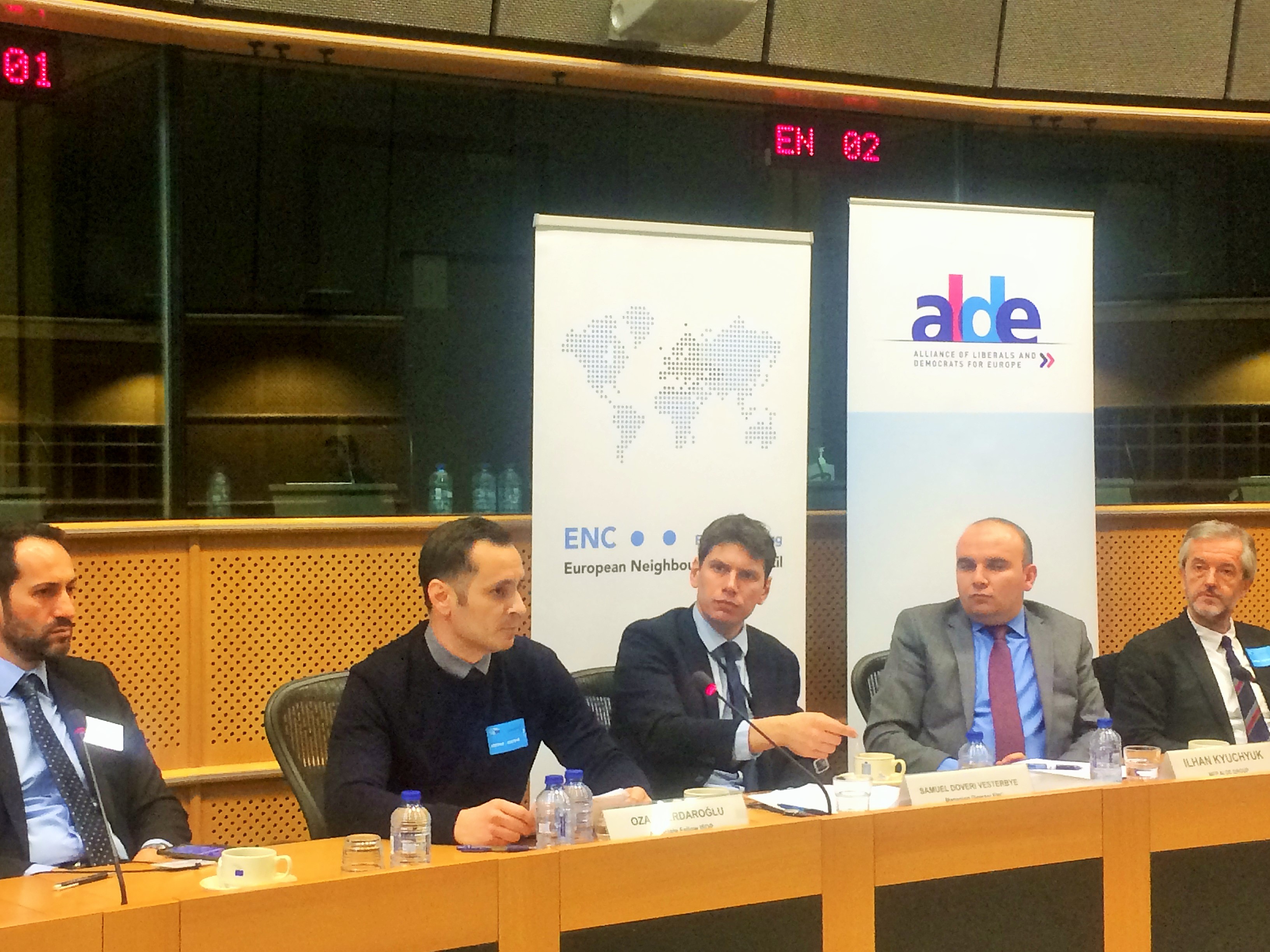 Ozan Serdaroglu added weight to the importance of the energy triangle – between Greece, Cyprus and Israel – which since 2010 has played a vital role in shaping energy in the region. He added that, the new Turkish-Israeli relationship is likely to further impact this triangle and add a new component, possibly building LNG terminals on the Island or perhaps moving gas to Israel from Aphrodite and through Turkey into Europe.

He also noted the importance of a stable business environment, focusing particularly on the fact that bypassing Turkey could be costly with LNG costing around 10 billion euros over 10 years, whereas a pipeline project would be estimated at around 2.5 billion euros in less than 5 years.

The Anastasiades government – so far – has insisted on enjoying the ground it gained in the Eastern Mediterranean.

He noted that, Cyprus – and others – may be facing certain risks when it comes to engaging in long term relations based on unrealistic partnerships. For example, Egypt is an unstable partner with economic difficulties, and any energy engagement with Egypt in absence if Israel is difficult to realize.

In this regard, after the reconciliation agreement with Ankara, it is possible that Israel further approaches Turkey and considers a pipeline through Turkey as a more cost-effective alternative. This may also incite Nicosia for a faster solution on the island and with Israel, due to its status as Washington’s strongest ally and a global power in need of stability in the Eastern Mediterranean. This could open Turkey’s guarantee status to debate instead of an absolute rejection by the Greek side. If the solution depends on the guarantees, then Turkish Cypriots could be given these guarantees in alternative ways as a result of better relations between Nicosia and Ankara.

Turkey also may therefore express its peaceful intentions and make some gestures as opening its ports for Cypriots shipping and aviation companies and include Cyprus in its customs union with the EU. These measures must definitely be paired with a will for dialogue by the Greek side on energy issues. Mutual confidence building measures in this case would prove essential, according to Serdaroglu.

Drawing comparisons to the European Coal and Steel Community, Serdaroglu emphasized that energy interdependence in the Cyprus and East Med could generate physical and structural elements which are likely to help towards political cooperation. 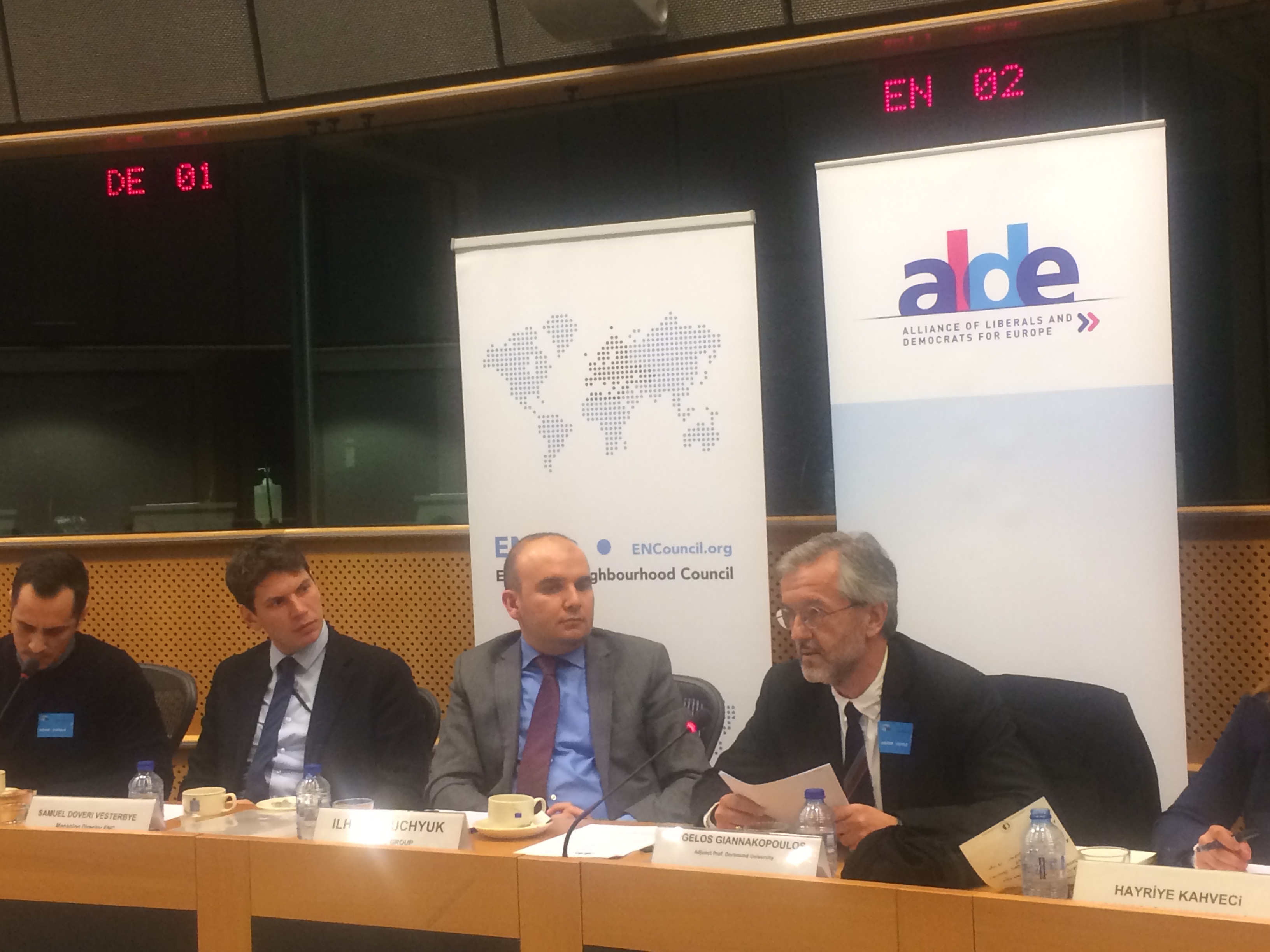 The second speaker – Professor Angelos Giannakopoulos – noted that the Leviathan and Aphrodites gas exportations through Israel could only occur with a proper settlement and peace in Cyprus, but would be substantially important for regional peace and stability, if no other gas discoveries occur in the meantime.

He reiterated the previous analysis about Turkey being essential, as a guarantor and a key energy country in the region.

Concerning the internal dynamics of Turkey – despite expressing serious doubts about its democracy – noted that a top-down a vertical decision making structure led by President Erdogan would probably facilitate and ease the solving of the Cyprus dispute. In other words, the constitutional change which is likely to occur could therefore impact the process and facilitate an easier negotiation environment.

Professor Giannakopoulos also noted that new energy discoveries may lead to price slumps that can block development of smaller fields; like the one in Cyprus.

He also added an interesting comment about potential future Greek-Turkish conflict over the so-called ‘hydrites’ in the sea areas between Greece and Turkey.

Concerning the reunification of Cyprus, he said that it will not be solved, solely, by energy, but that EU energy policies had the power to impact the future. 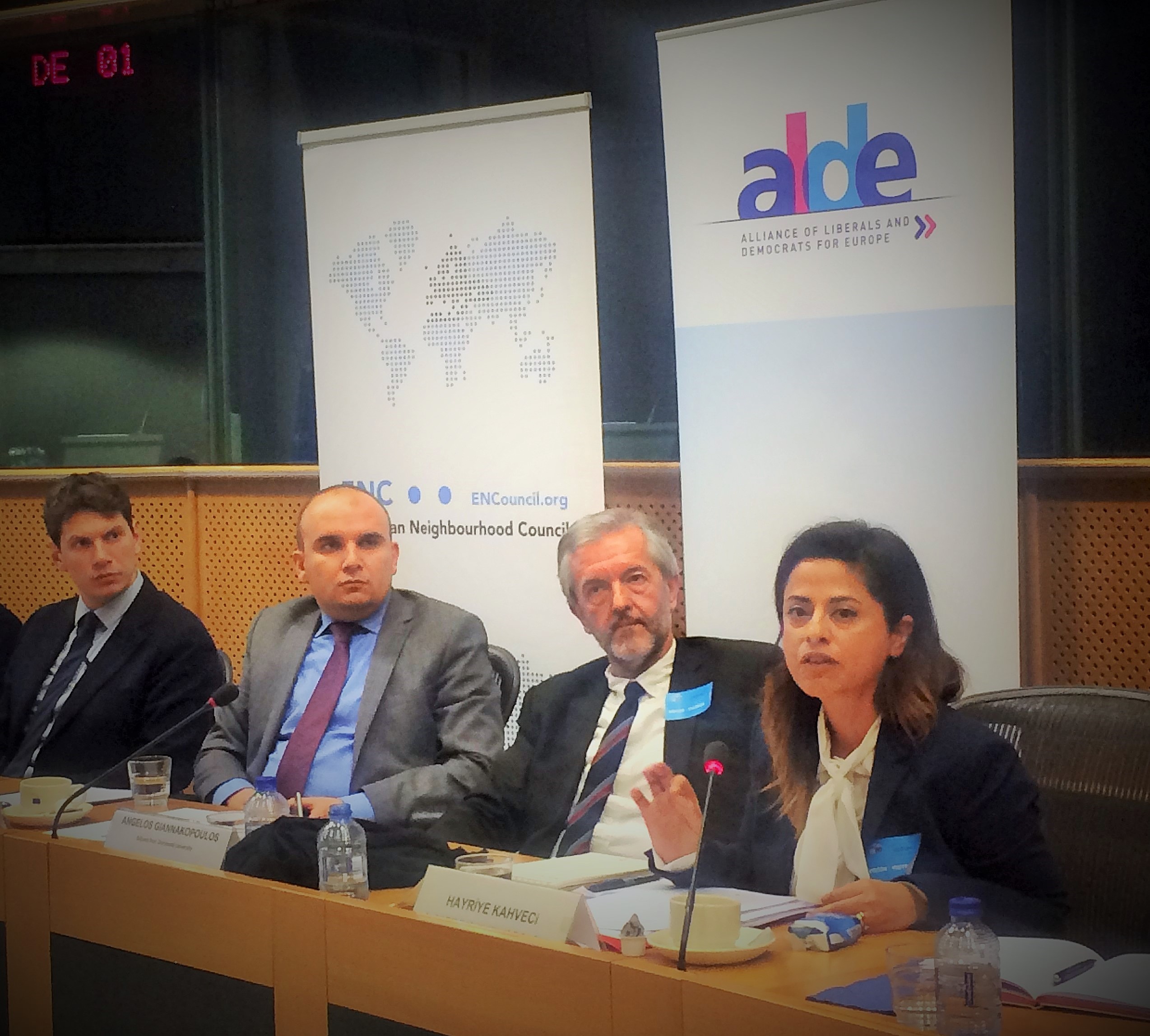 The third speaker – Hayriye Kahveci – spoke about the Caspian sea basin as a good comparison model for Cyprus and the East Med.

She also noted that the current gas prices remain very low, meaning that it becomes difficult and sometimes too expensive to invest.

Assistant Professor Kahveci also noted that the Cyprus reunification attempts has been guided by gas related problems – expressing little hope about gas discoveries being a main driver and giving various examples from 2004 during the Annan Plan.

She however noted that energy discoveries do play a positive role in adding governmental attention to regions which could otherwise go forgotten, and conflicts that could stay unresolved. 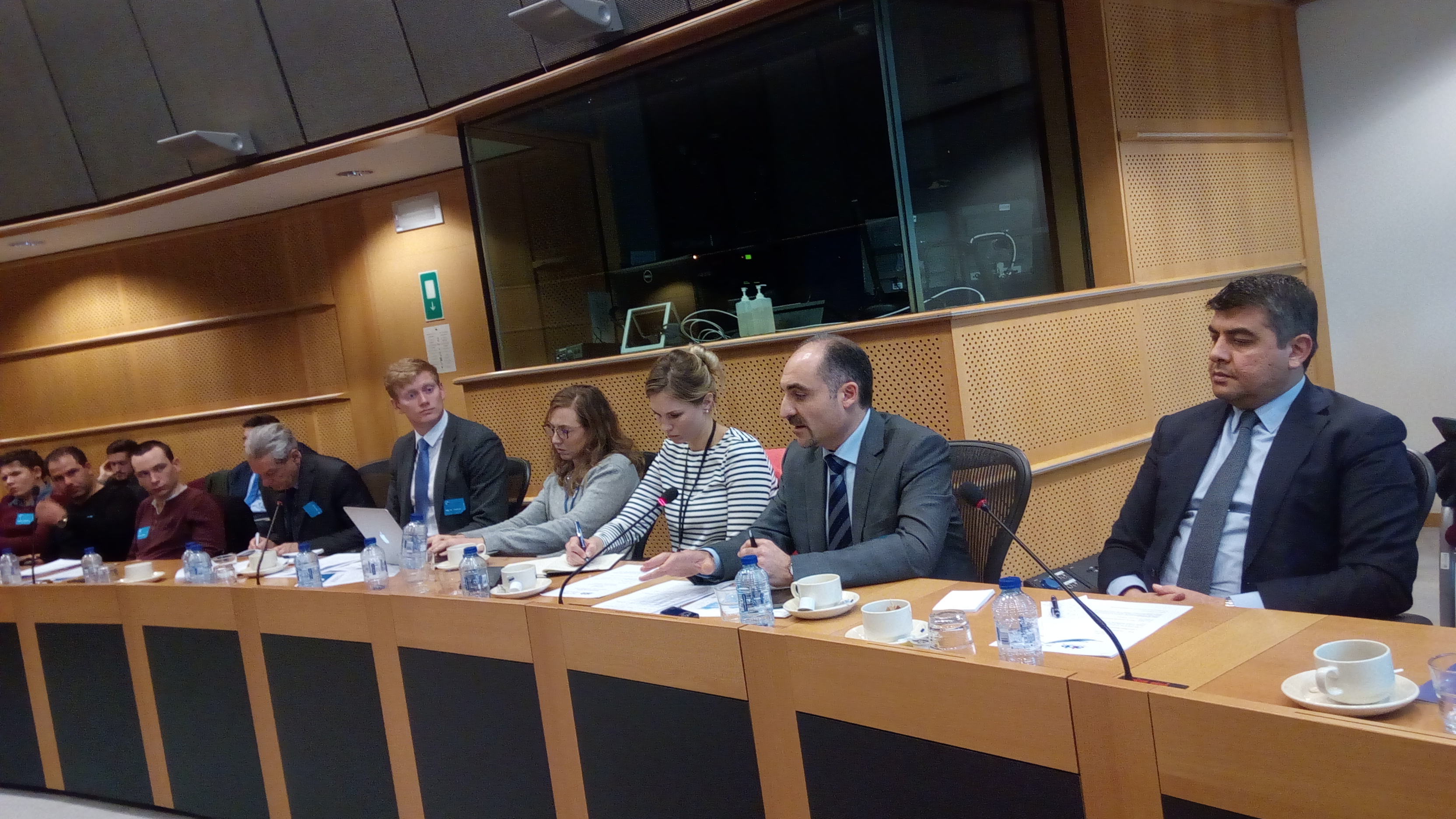 The event was also attended by government and private sector representatives that shared their thoughts and ideas about recent gas discoveries and the possibilities of peace and unification in the light of energy cooperation.

Research on energy in the Eastern Med

ENC will co-conduct research about energy geopolitics and private sector involvement in the eastern Mediterranean in 2017.

The purpose of Roundtable Discussions, held jointly with parliamentarians, is to inform and exchange ideas on specific policy topics in order to improve inter-institutional dialogue while improving best practice and EU policymaking. It also serves as an important instigator for further research and policy making.