Three panel discussions were organized, where the first one concerned how the EU is handling threats to stability in wider Europe. Dr. Dominika Krois, Organisation for Security and Co-operation in Europe (OSCE/COSCE) Coordinator at EEAS, presented the EU efforts in stabilizing the neighbouring region. In particular, she highlighted the unequivocal support for the OSCE principles and its comprehensive and cooperative approach to security, as well as its own role in conflicts’ mediation in the OSCE area (crisis in and around Ukraine, conflicts in Moldova and Georgia and Nagorno-Karabakh conflict, and normalisation of the relations between Serbia and Kosovo). 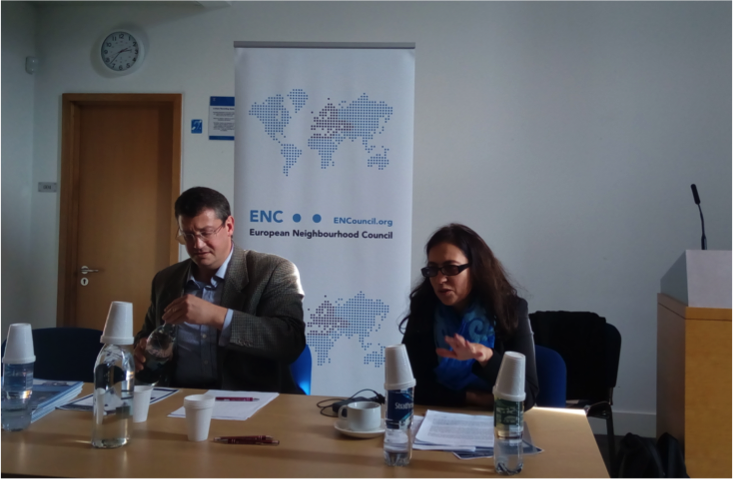 In the second part of the event, Andreas Marazis, Head Researcher for Eastern Europe & Central Asia at ENC, and Dr. Nina Lutterjohann, Research Associate at University of St Andrews assessed the challenges and impasses of EaP countries.

Mr. Marazis focused on Ukraine and showed the flaws of the Minsk II Agreement. He highlighted the presence of an embryonic NATO-EU cooperation, which is crucial for developing a stronger presence in EaP countries, such as Ukraine. Despite the fact that the EU is focusing on the civilian sector reform and NATO on hard security, the issues of strategic communication and cyber security are interconnected, as Andreas Marazis mentioned. They provide the ideal opportunity for EU-NATO cooperation to unravel its full potential in Ukraine and concretely support a non-member partner who is facing a very real threat to its sovereignty.

In the cases of Moldova and Georgia, Dr. Lutterjohann presented and assessed the role of international actors in both states. She provided crucial insights on the effects of competing narratives on the International Organisations (IOs) ability and performance to respond and mitigate the conflicts in these two countries. In particular, the role of the EU as a conflict manager and a normative power reinvigorated the negative perception of the West in Moscow eventually worsening the relationship between the two actors. This last point is clarified in the last panel of discussion where more important perspectives concerning the practices of Russia and the EU were presented. 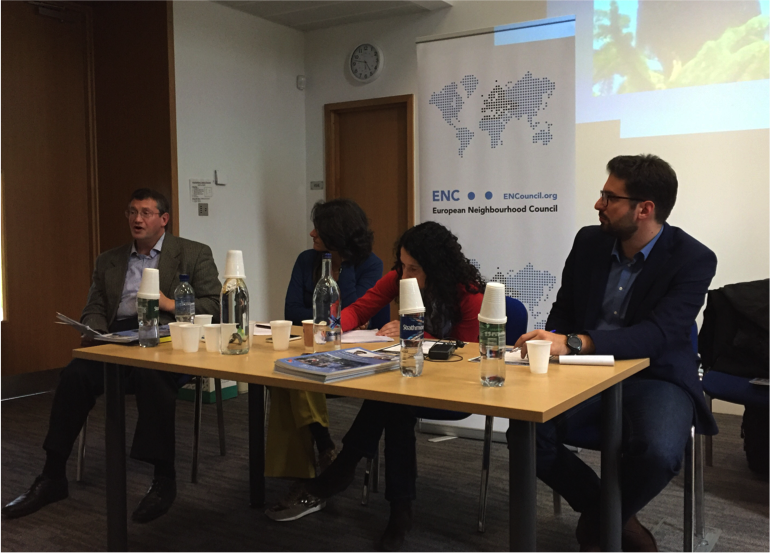 Perspectives and Practices of Major Actors in Stabilising Wider Europe: Russia and the EU:

Professor Dr. Rick Fawn (School of International Relations, St Andrews University) and two members of the Faculty of Economics and Centre for Social Studies at the University of Coimbra (Portugal) – Associate Professor Maria Raquel Freire and Assistant Professor Licinia Simao analysed the Russian factor in the post-Soviet space, the shifts in the conceptualisation of the EU’s regional security role as well as the main challenges and opportunities for the future developments of the ENP/EaP.

Professor Fawn interestingly explained the chameleonic nature of Russian foreign policy. In fact, Moscow is portraying itself differently in regional conflicts, being an outright instigator of them, then an early contributor to the conflict continuation, and finally a mediator. He concluded by providing important recommendations, which highlighted the importance of maintaining dialogue with Russia in the common Neighbourhood, while being committed to the overall EU policy and European values.

Last but not least, Assoc. Prof. Maria Raquel Freire and Ass. Prof. Licinia Simao stressed the role of the EU as a crisis manager and the impact of the EU strategy on regional security in the framework of the ENP/EaP. They underlined the double nature of this approach, which combines structural elements, such as liberal and political values, but also hard security features.

In their conclusions, they argued that the 2016 “Global Strategy” for security coincides with ongoing shifts, both within the EU strategic thinking and its institutional capacity in the post-Lisbon context – such as Brexit – as well as in the international arena. Yet, despite changes in the EU’s regional security policy, the EU stabilisation efforts are rather insufficient; hence questioning the EU’s actorness in its Neighbourhood.