The 22nd of February, the European Neighbourhood Council (ENC) organized a roundtable discussion together with the University of St Andrews on issues related to conflict resolution and security in the Eastern Partnership area as well as Turkey and Central Asia.

Experts and academics from the regions, the University of St Andrews and a representative from the European External Action Service (EEAS) participated in the event – including Skype interventions from scholars based in Central Asia.

After the opening remarks by Professor Rick Fawn from the University of St Andrews and ENC Managing Director Samuel Doveri Vesterbye, Dr. Dominika Krois, an OSCE Policy Officer at the EEAS, presented how the EU is handling threats to stability in wider Europe. 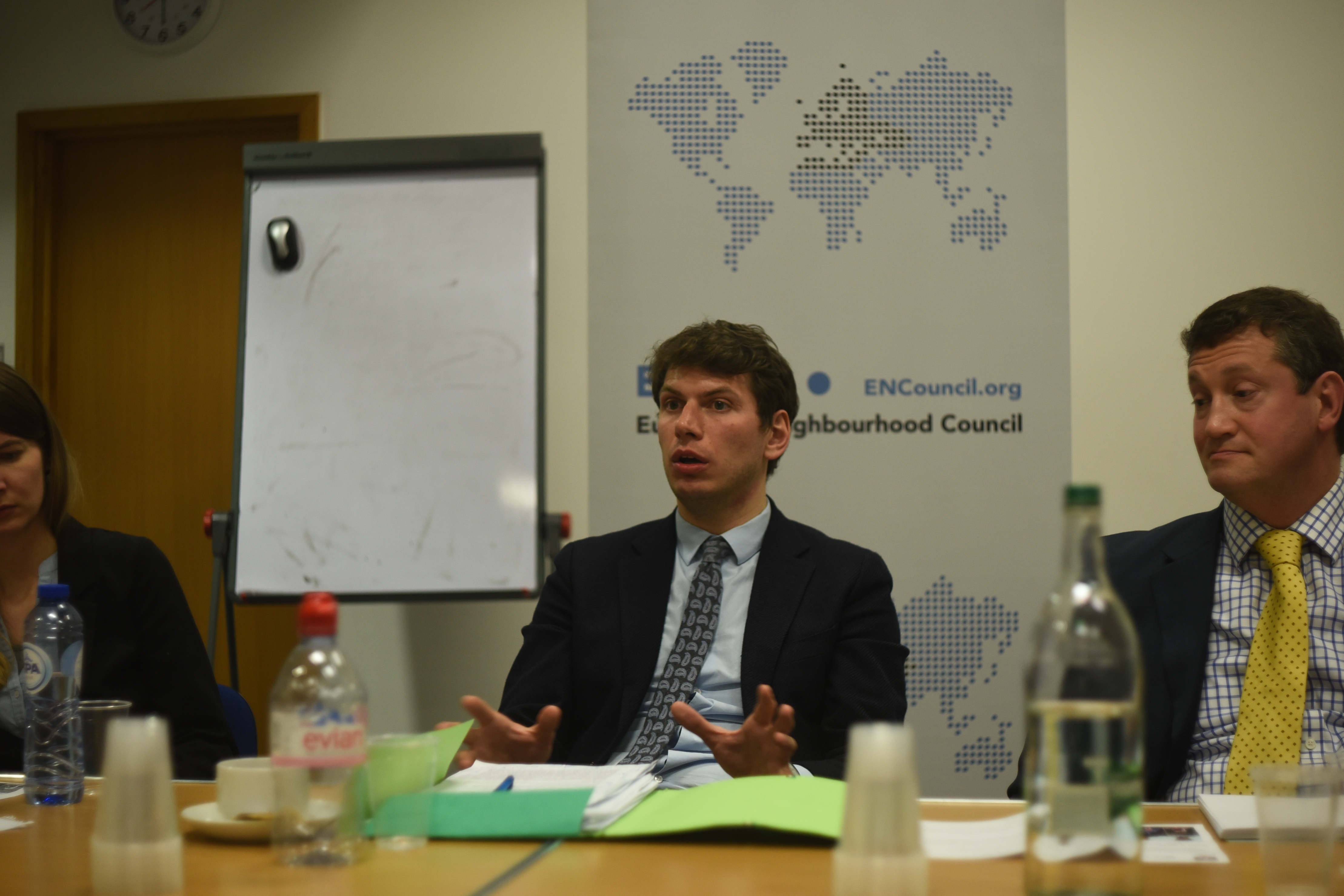 Two panel discussions followed, where the first one concerned regional actors and their role in stabilizing or destabilizing the neighbourhood.

First panel on security and threats to stability

Professor Rick Fawn and the PhD candidates Shair Dzhuraev, Karolina Kluczewska and Jason Bruder were part of the first panel; discussing the Russian factor in the post-Soviet space, which role the EU has in combating the threats to stability in Central Asia and the US perspective on the EU’s role of security in its neighbourhood.

Professor Fawn brought some interesting perspectives to how Russia is portraying itself in regional conflicts: operating by transforming a conflict as a means for resolution.
While Mr. Dzhuraev presented an overview of political processes in Central Asia, Ms. Kluczewska informed the audience about the EU’s work in Tajikistan.

During her speech, she raised issues concerning the aid that the EU is granting. Emphasis was given to misconceptions that the EU and other donors might have about Tajikistan. In addition, the donors should re-think their model of supporting civil society and policy process to ensure that the aid is reaching its planned destination.

As the last speaker of the panel, Mr. Bruder gave insight into how the newly elected US President Donald Trump views the world and specific areas in Southeastern Europe and Central Asia. He argued that the president is putting emphasis on the geoeconomic point of view, leaving the geopolitical point of view as a secondary priority.

The second panel focused more on the role of the EU and its conflict management in wider Europe rather than the regional actors. As in the first panel, there were four presenters who were part of the second panel: the PhD candidates Nina Lutterjohann and Elena Zhirukhina, together with representatives from the ENC Samuel Doveri Vesterbye and Andreas Marazis, Head Researcher for Eastern Europe and Central Asia.

Mr. Doveri Vesterbye emphasized Turkey’s geopolitical position as important in terms of conflict management. Bordering Syria and being closely interrelated to the question of Kurds, they hold a key role to conflict resolution in the region, which will affect all regional actors at stake, as well as many EU countries. 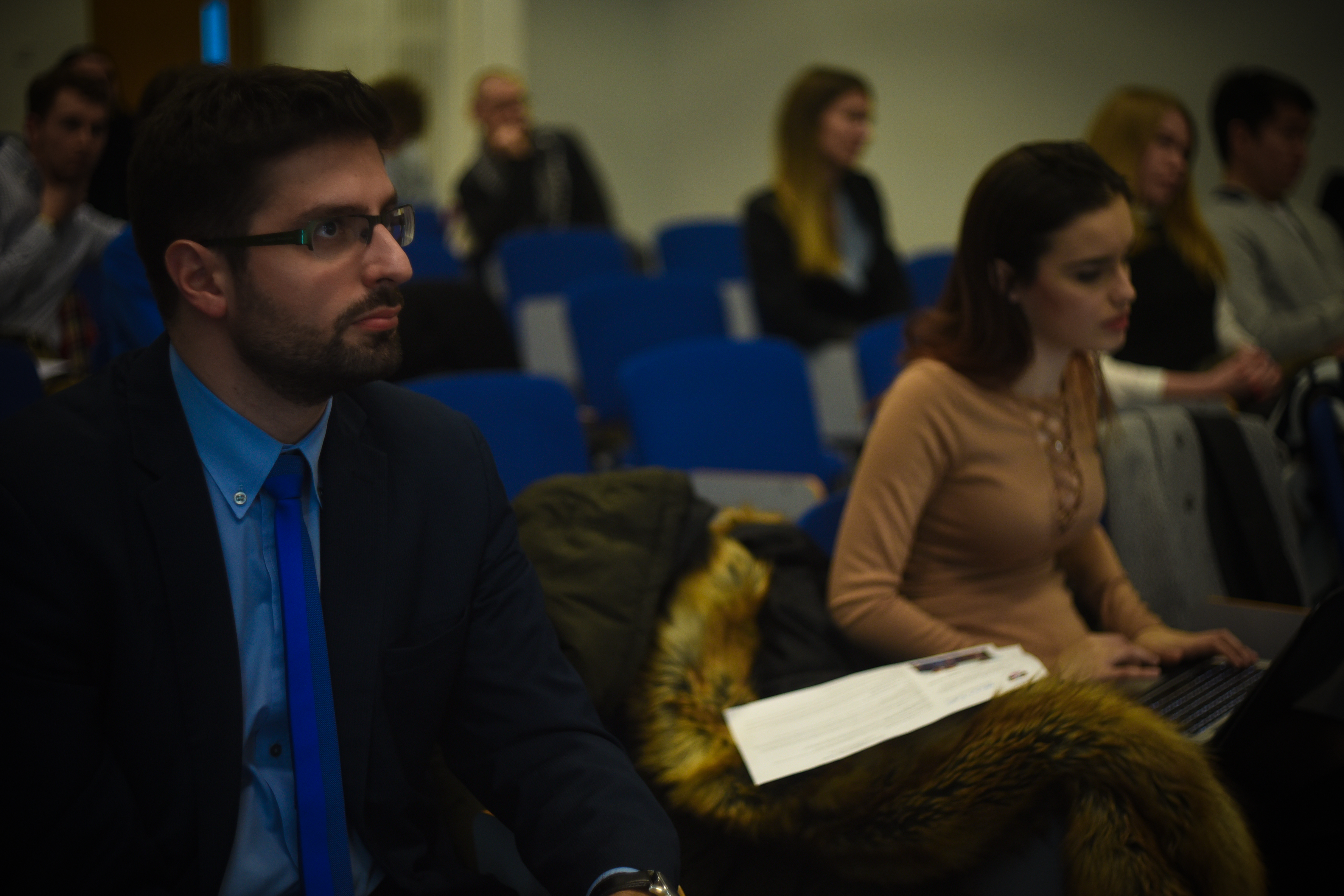 In addition, Mr. Marazis was pointing out the importance for security in the Black Sea region while discussing the Ukraine crisis and where it is headed.

In the case of the Ukraine crisis, Mr. Marazis emphasized the importance of distinct and stable cooperation between EU, NATO and OSCE through better coordination of projects and funding. A clear message has to be sent – sanctions should stay in place – and the communication channels with Russia should be maintained or reinforced.

Ms. Zhirukhina spoke about the joint EU and Russia counterterrorism work to combat the extremist group Caucasus Emirate. In her speech, she noted that there is a risk that this group can expand and operate outside of the Caucasus – in the EU area or by attacking EU citizens residing in the region. Regardless of the EU’s stance towards Russia, they are efficient in combating threats of terrorism, she said.

Ms. Lutterjohann shed light on the different understandings between Russia and the West, represented through pan-European IO’s efforts, regarding threat, stability, and capacities for breaking the deadlock to solve the conflicts in two of the Eastern Partnership countries. In her presentation, she pointed out that the EU still needs to present itself as stronger actor, including a clear intention to enhance stability, as the recurrent patterns in conflict resolution efforts confirm the persisting deadlock.

It is clear that the EU should convey a clear and distinct message to the countries in the concerned regions. Russia should not be disregarded, but rather be approached by the EU constructively and firmly. Even if they are not a collaborating partner to the EU, they are nevertheless an important actor in the region.

Overall, the event helped share and raise questions about security and conflict resolution in the Eastern Partnership area, Turkey and Central Asia. The event was a collaboration between the ENC and the University of St Andrews, in cooperation with the EEAS, in an effort to align policy perspectives and academic research, bringing together similar-themed academic researchers and policy makers.