A discussion on Turkey: From Coup Attempt to Referendum – Identity Groups Revisited

On the 6th of March, The European Neighbourhood Council (ENC) organized, in collaboration with Public Policy and Democracy Studies (PODEM), a roundtable discussion on Turkey – from coup attempt to referendum, focusing on different identity and minority groups.

The leading Turkish think tank deals with issues related to Kurds, judiciary controls, security, refugees and Syria, among other topics.

In the light of a recent research report released by PODEM, the event helped brief EU policy-makers and parliamentarians about the current political and social situation after the coup attempt last year, as well as providing data and surveyed perceptions about how different identity groups in Turkey view the coup attempt and the upcoming referendum.

In her opening remarks the Executive Director of PODEM, Ayse Yircali, stressed the existing political and social polarization in Turkey while ENC’s Managing Director Samuel Doveri Vesterbye emphasized that secular groups have become increasingly important since last years’ coup attempt. The Kurdish issue has suffered a breakdown, leaving many questions without answers and the need for the EU and Turkey to act constructively. 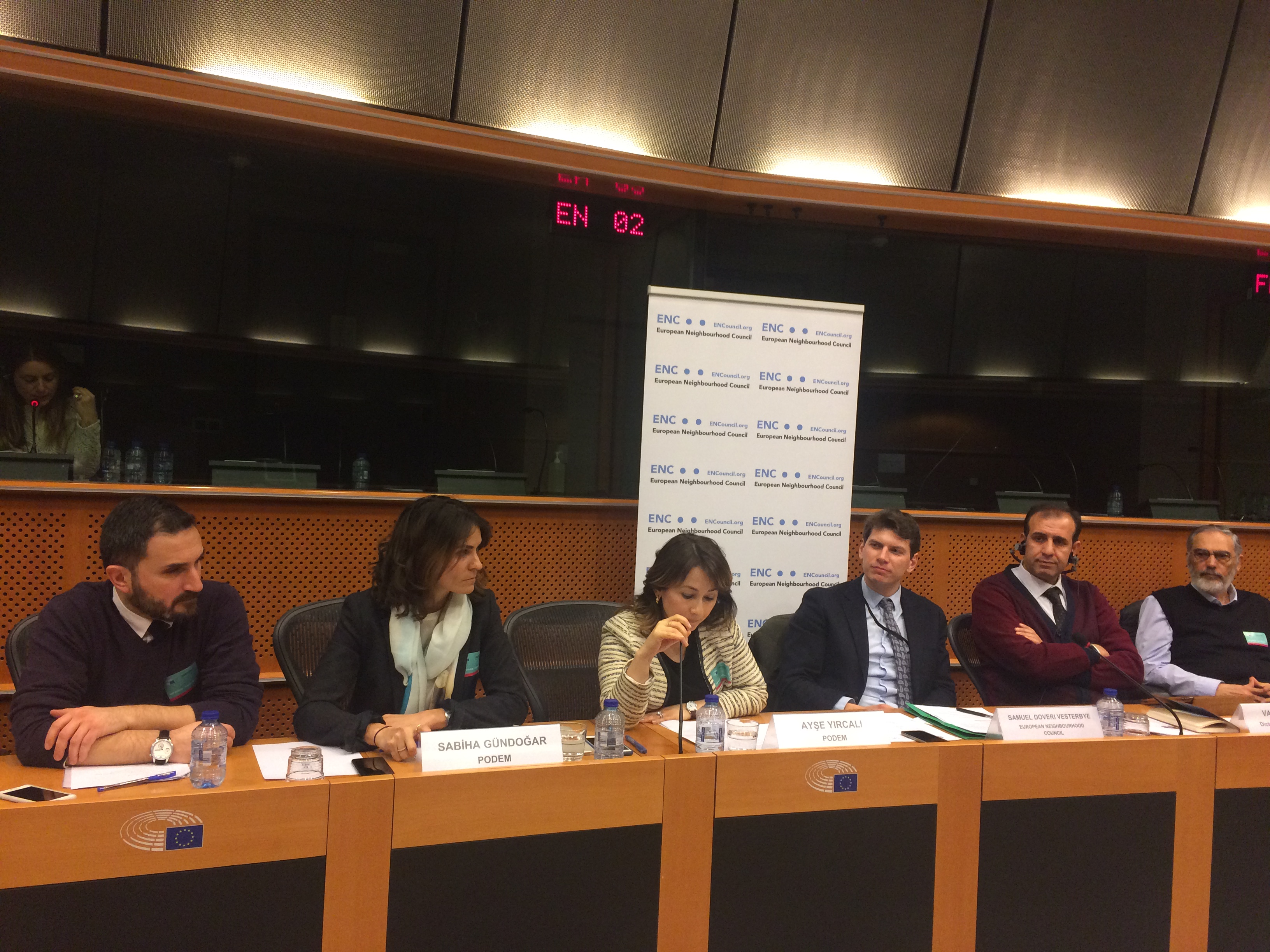 According to Ms. Sabiha Gundogar, PODEM’s Research Director, the coup attempt was perceived as unexpected, whereas the positive climate of political unity was temporary and short lived. 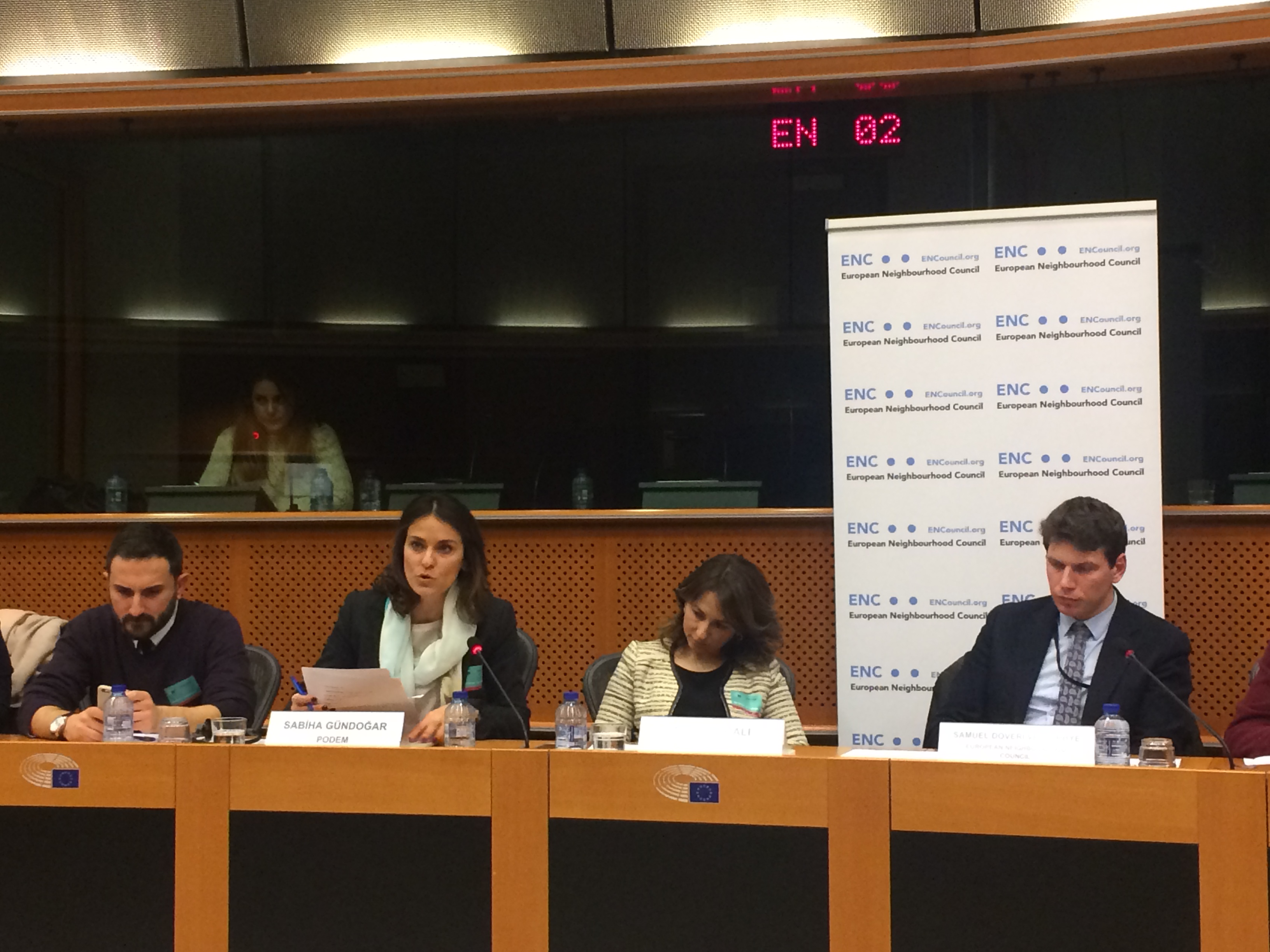 The political landscape became very different after the coup attempt; in particular, one could note new divisions in the already polarized society. One example of the new societal divide is that two Kurdish sub-groups, the nationalistic and the Islamic, are unexpectedly approaching each other, according to various reports.

All sub-groups within the Kurdish identity group are explaining the coup attempt differently, according to Mr. Vahap Coskun, Professor from Dicle University. The Kurds who are voting for the AKP (Justice and Development Party) are of the opinion that the coup was a victory and great for democracy. The Kurds who are voting for the HDP (Peoples’ Democratic Party) stated throughout the research that the coup was orchestrated by President Erdogan to strengthen the support for himself and his party.

Kurds who are more nationalistic generally do not vote, according to the report. They believe the coup was a military coup in which the HDP could have been more vocal and supportive of anti-coup sentiments. This sentiment is largely linked to the fact that previous coup d’etats in Turkey have been directed against Kurdish groups, which is likely to leave a strong sense of distrust towards any military intervention or coup attempts.

The report also shows the general view of Turkish people vis-a-vis the West’s reaction to the coup attempt. Overall, a majority of Turks believe that the West did not care enough about the situation in Turkey during the coup attempt, while stating that some political leaders claim that they are responsible for today’s situation with the Kurds.

On the topic of Syria, many respondents in the report stated that Turkey should act in Syria to resolve its own political situation, as it is believed to be a spillover effect. 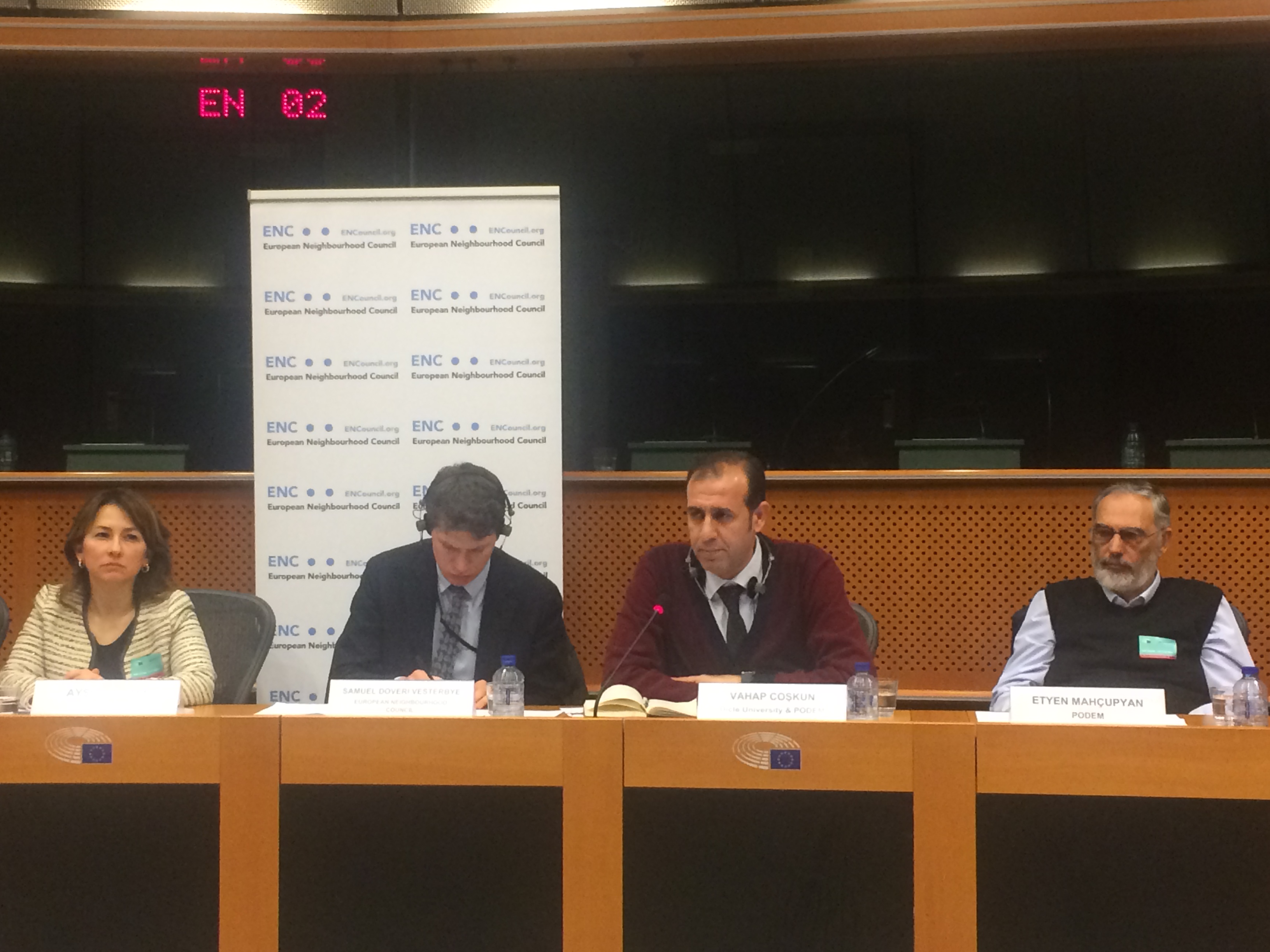 Mr. Coskun drew three conclusions on the coup attempt: first, the coup could have created more solidarity than it did. Second, it could have created more democracy than it did and urge political processes to move forward. Last, many Kurds felt excluded after the coup attempt took place. The post-coup process, in particular the implementation of the state of emergency, was very badly managed and the political leaders created societal divisions.

Importantly, the general perception of Kurds as one singular ‘political entity’ appears to be incorrect, according to the experts attending the event. Instead, the results indicate that various groups exist which perceive the Turkish government in different ways, including supporters and various layers of more constructive groups that are willing to cooperate.

Final conclusions by Mr. Coskun included the view that as long as there is no solution to the Kurdish issue, there is always a risk for another coup attempt due to societal fragmentation. The state of emergency is bringing the solution further away and it is very important to follow the events after the referendum is held to create a positive follow-up climate to solve the problem.

Views on the referendum

According to the surveyed groups, a main issue for the Kurdish demographic – regardless of political affiliation – is that the referendum is not dealing with any of the core demands from the Kurds. The report stipulates that the Kurdish group, which was interviewed, has jointly four demands for political leaders: consideration to the definition of citizenship, recognition of the Kurdish mother tongue, electoral equality and centralization.

None of these demands are respected or debated in relation to the referendum, according to the same group. 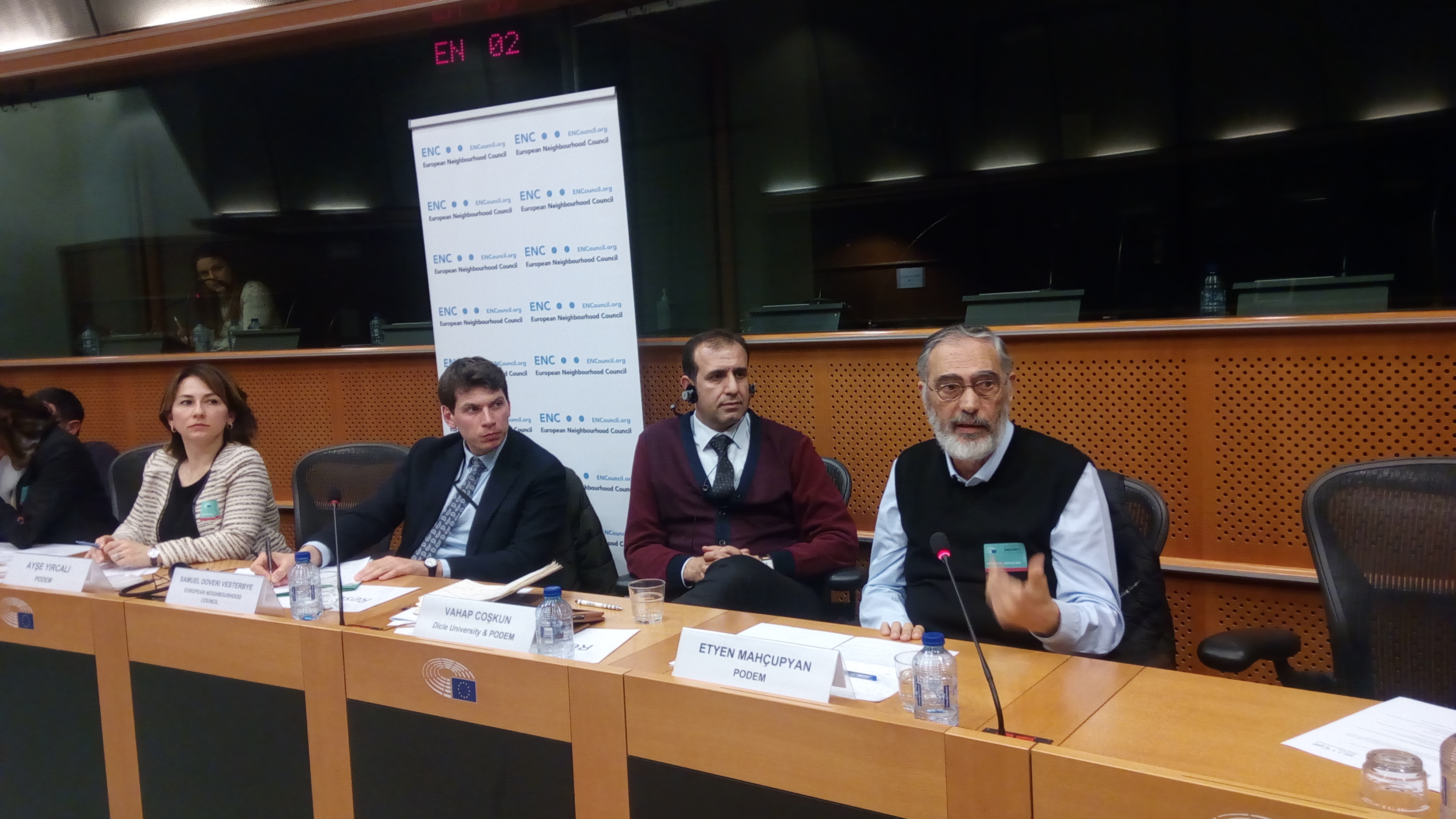 When approaching the referendum, there are four main concerns often expressed in Turkish society among identity groups, according to Mr. Etyen Mahcupyan, Executive Board Member at PODEM. First, the economy will be negatively affected. Second, the settings for a democratic society could decrease. Third, anti-Erdogan sentiments will increase and create societal problems, while corruption may persistent. These concerns remain the same regardless of political affiliation.

Another common point between the different identity groups that was discovered by the report is the conclusion that there is motivation to find a solution to the current situation. “Different parties must participate in the solution processâ€, says Mr. Coskun.

What does the future hold?

With the referendum in Turkey on the 16th of April, the report shows that the surveyed priority areas clearly include rule of law, secularism and a strong Turkish state. Importantly, an overall majority of respondent see the practical need for Turkey to stand united due to the difficult regional and domestic circumstances. 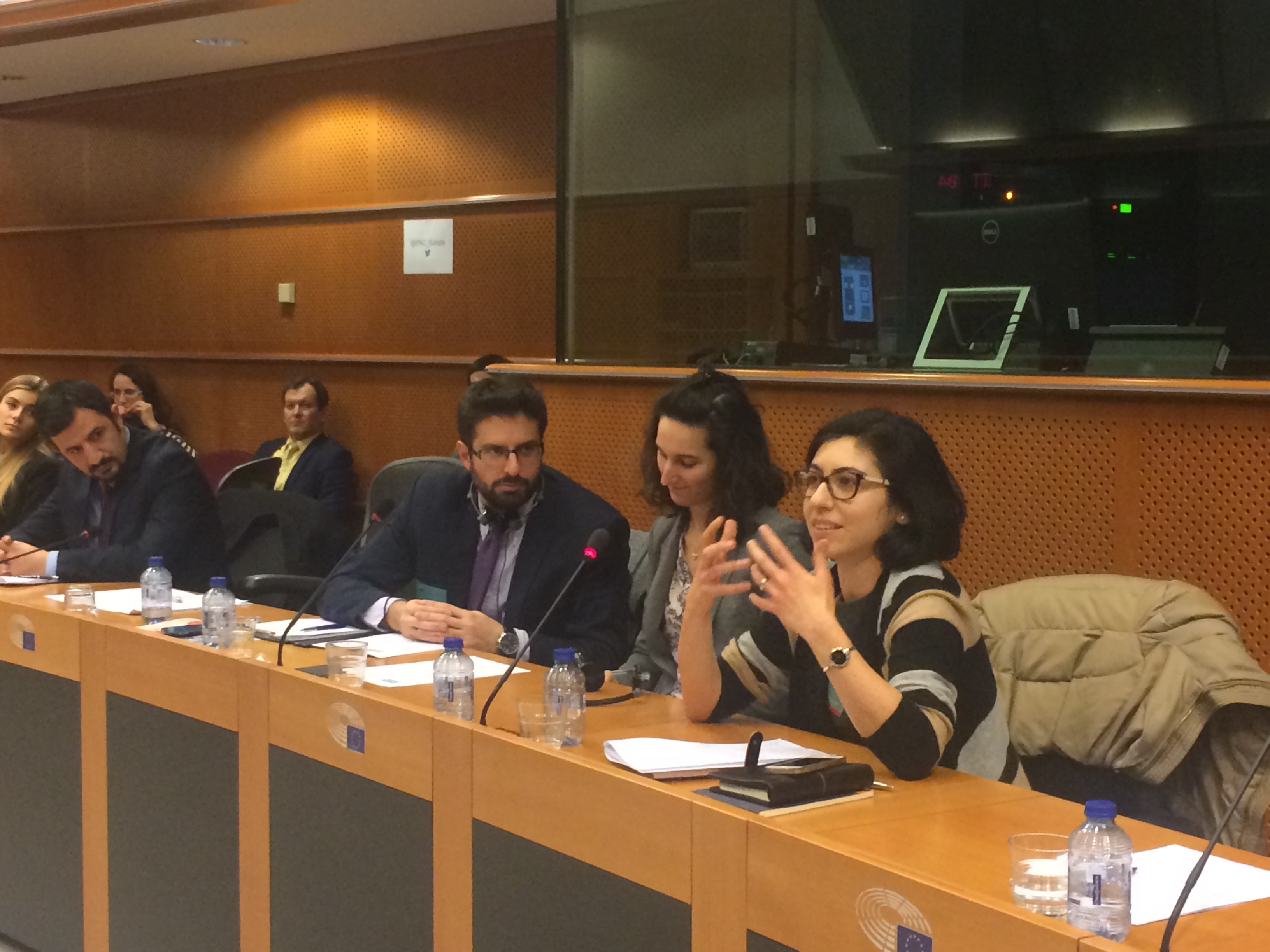 Despite the difficult political situation in Turkey, Mr. Mahcupyan noted that the survey showed clear signs of optimist with regards to leadership perceptions and the future of the country. The majority of the surveyed participants consider democracy to be more important than a strong Turkish leader when being asked to choose between the two of them.

The parliamentary policy roundtable was a key opportunity for policy-makers based in Brussels to gain insight into Turkey’s minority perceptions, including on-the-ground research from the region.

ENC will provide an analysis on the same topic during the upcoming weeks, including research on minority perceptions, in cooperation with PODEM, as a follow up to the parliamentary roundtable.