The European Neighbourhood Council (ENC) held a European Parliamentary Roundtable Policy Discussion on the topic of customs union reform with Turkish economic experts and academics, including private sector groups and business associations on the 25th of January 2017.

The first in a series of ENC roundtables on Turkey and trade, the parliament event aimed at opening the floor to questions from the private sector and informing parliamentarians and commission officials about the concerns from each side. In turn, this is aimed at pre-empting unforeseen obstacles throughout the negotiation phase and to reinforce inter-institutional coordination and transparency between the private and public sectors when dealing with customs union reform between Turkey and the EU. The roundtable was supported by the Turkish private sector; represented by the Independent Industrialists’ and Businessmen’s Association (MUSIAD), in cooperation with the European Entrepreneurs (CEA-PME).

Turkey and the EU are currently re-negotiating a customs union reform, which will upgrade the customs union that has been in place since 1996. As of 2015 both sides have declared their willingness to reform and modernise the current customs union; a process which is currently underway between the European Commission and the Turkish Ministry of Economy and EU Affairs Ministry.

The benefits of Customs Union reform 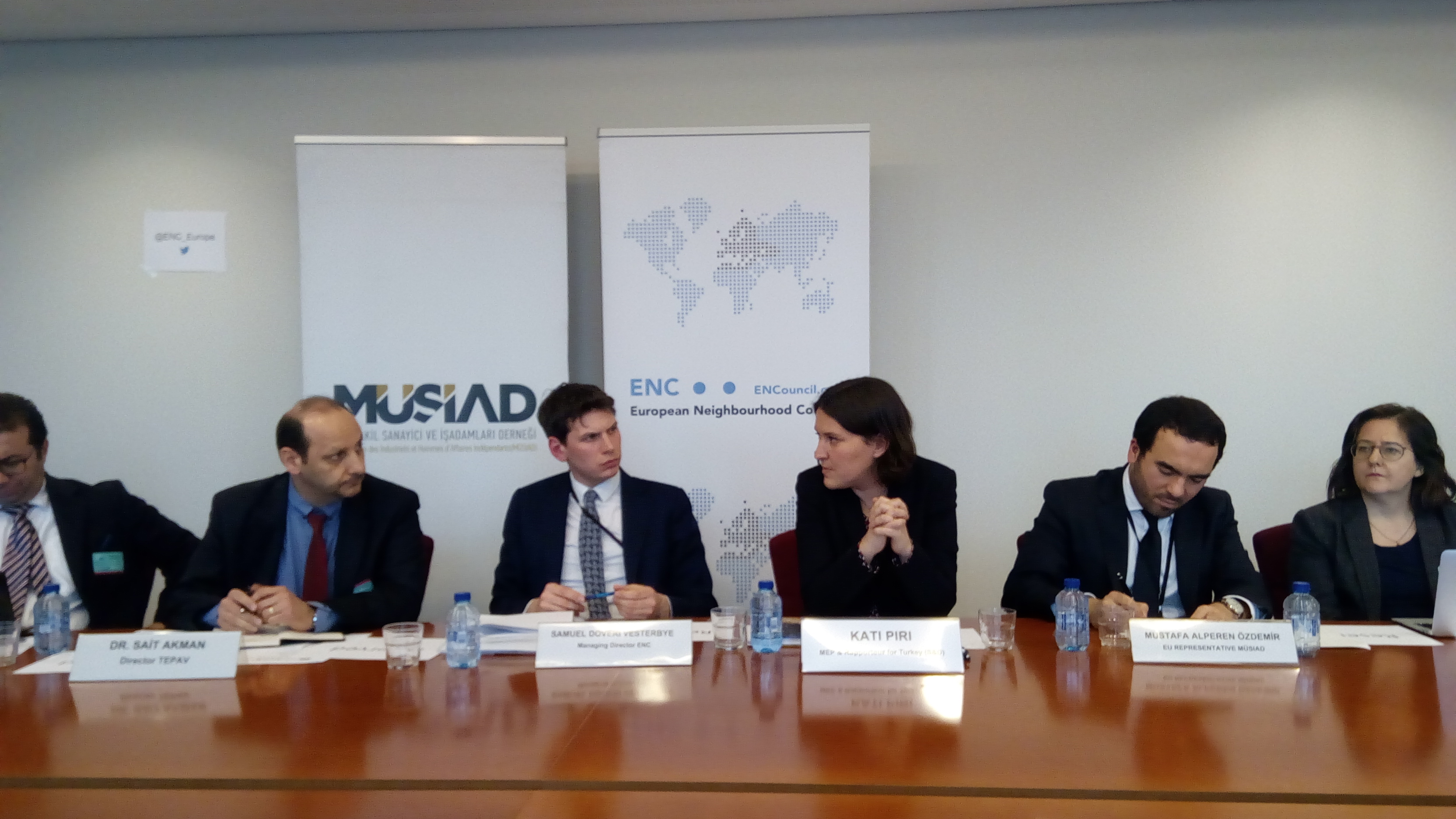 Among the distinguished speakers at the parliamentary roundtable were business community representatives from the EU and Turkey; including Mustafa Alperen Ozdemir, EU and Brussels representative for MUSIAD and Stefan Moritz, Managing Director of CEA-PME.

Mr. Ã–zdemir focused on how the new agreement between the EU and Turkey will enhance trade relations, as well as the positive effect that trade can have on diplomacy, considering Turkey’s role as the EU’s strategic partner in its neighbourhood.

Mr. Moritz said that “equal treatment between the EU and Turkey” remained vital in this process, while focusing on the importance of impartial win-win economics instead of politics. 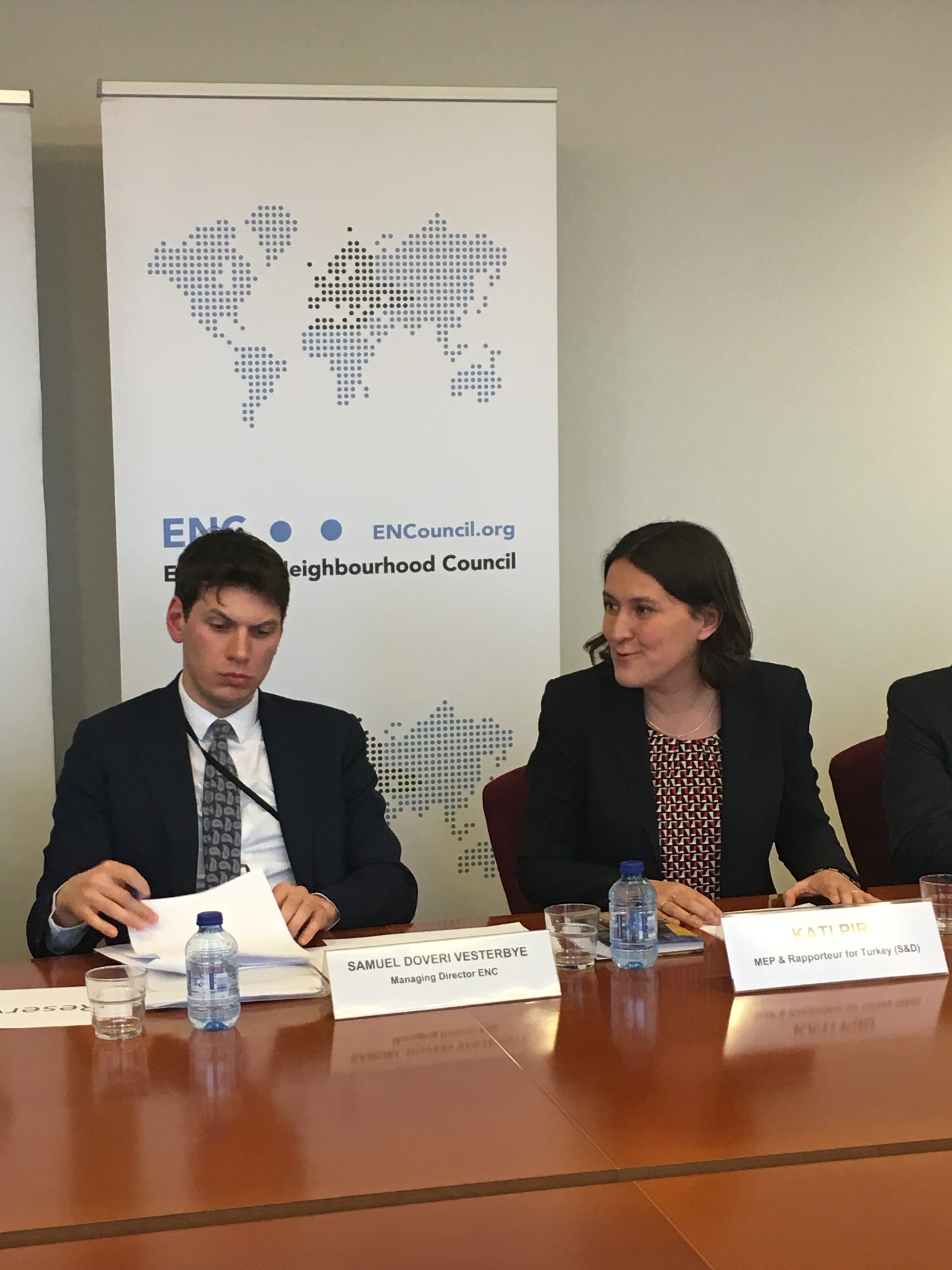 Due to a line of policy concerns – including Cyprus, energy diversification and security – it remains a top foreign policy priority to cement a closer relationship between Turkey and the EU, spanning into trade and commerce.

Ms. Piri noted that special attention was needed on the issue of customs union reform, as it involved both “trade’ and ‘Turkey’, which could easily create a “mess” in the European Parliament if not dealt with properly.

In other words, it remains crucial that the various political parties, rapporteurs and chairmen/women in the European Parliament are involved in the process and informed about the importance of the customs union reform, both economically, socially, and politically.

Ms. Piri noted that – despite calls for an accession freeze – it remains in Europe’s interest to concern itself with the economic difficulties of partners like Turkey in order to foster a better and stronger partnership. 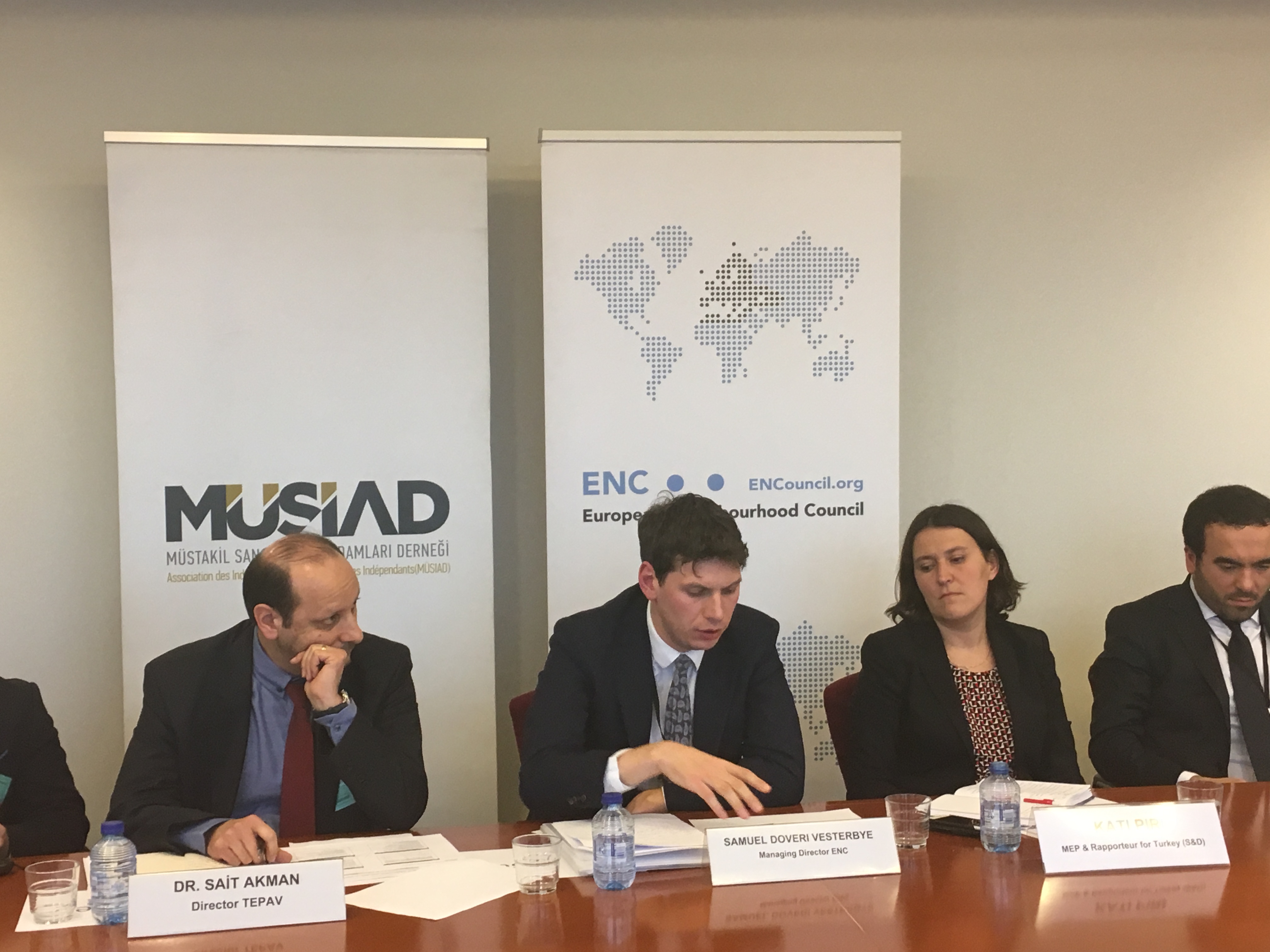 All speakers noted that the customs union reform is likely to cover many new areas of trade, including public procurement, agriculture, services and manufacturing sector – involving nearly all facets of EU and Turkish economic activity.

One of the reasons for reform has been the problem of trade diversion, the disadvantageous situation in which Turkey loses its competitive trade as a result of new free trade agreements signed by the EU and third countries outside the EU. Another fundamental reason has been the EU’s need to re-boost growth at home and increase economic ties with its strongest defence partner in Europe. 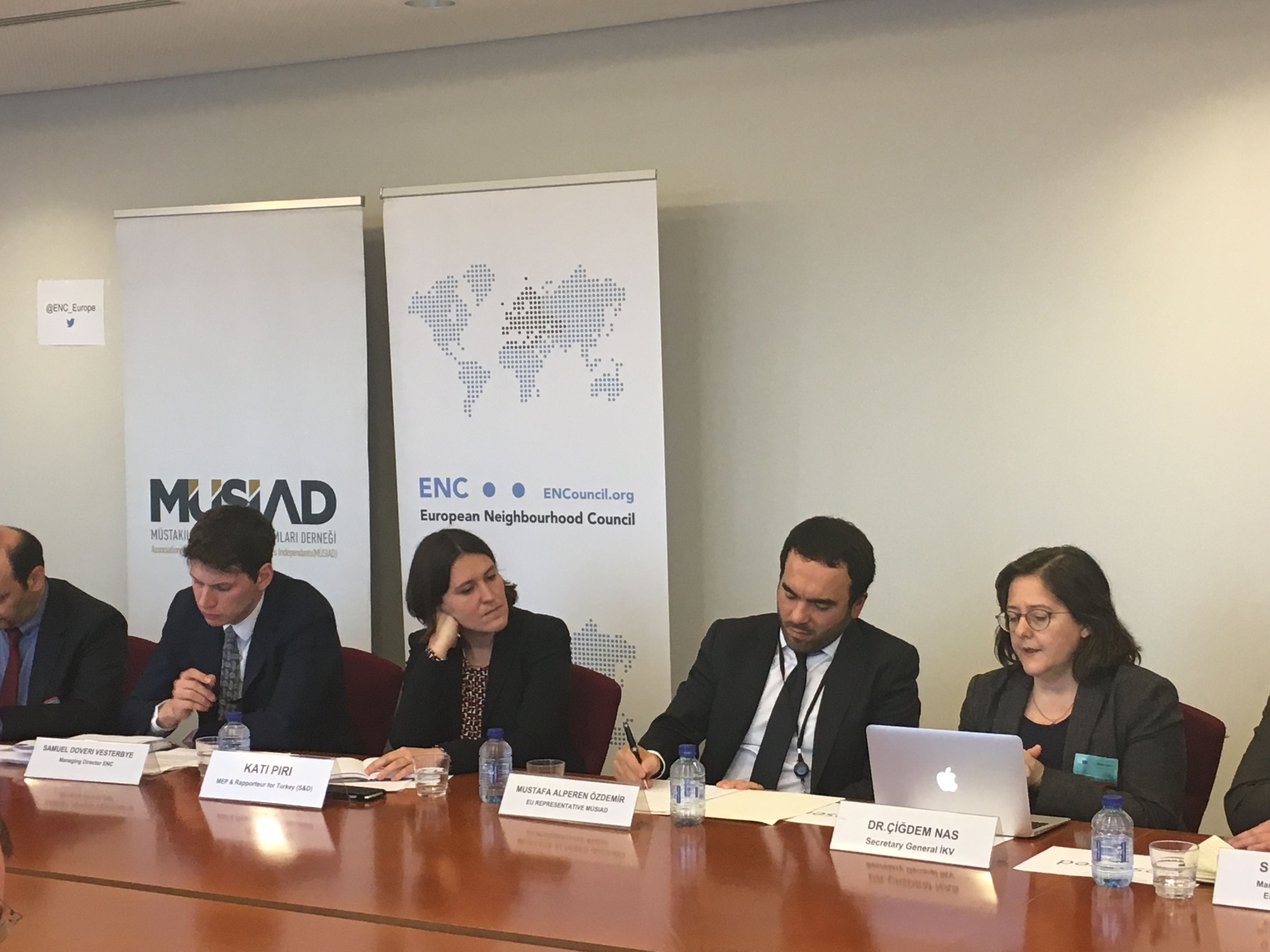 Dr. Nas noted that the customs union remains an essential area of cooperation, as most business associations remain very favourable inclined towards the modernisation, while the Turkish government also supports the initiative.

However, the successful reforms rest on a series of factors, which must be resolved, like the visa liberalization issues and transportation restrictions for trucks on the EU-Turkish border, which remains a necessity for service providers to function properly.

Dr. Nas noted that – in terms of perception – the main barrier continues to be visa, recognition of qualifications and quotas, according to the IKV study with 152 Turkish businesses. Importantly, only 6.6% of respondents were against the expansion of services to the customs union.

According to Dr. Akman, the overall majority of impact assessments on customs union reform indicate that both the EU and Turkey are to benefit – in terms of employment and GDP – from a modernised customs union. One issue however remains the lower competitive level of Turkey in the area of agriculture and public procurement. 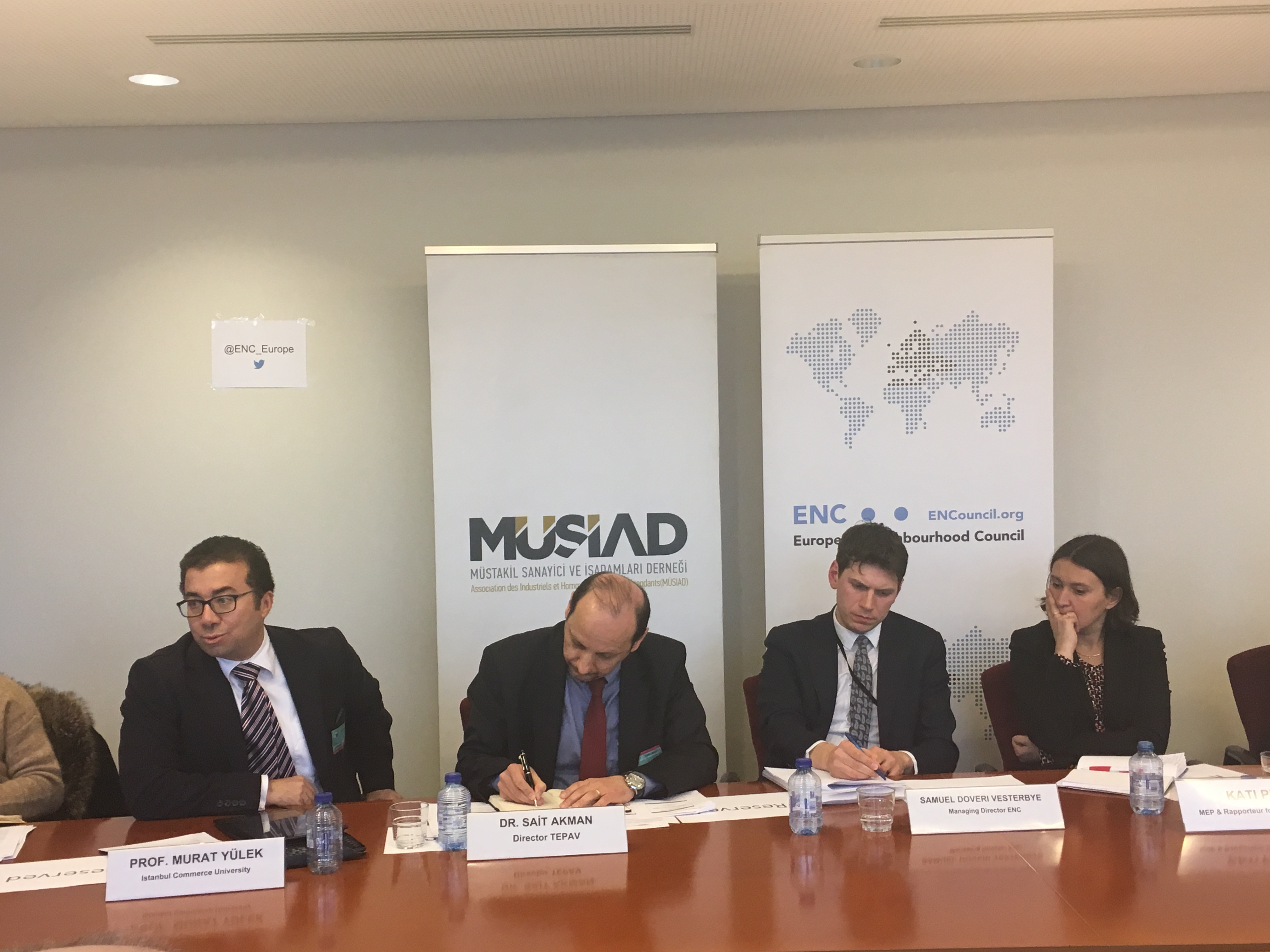 From a political-economic perspective, Professor Yulek said that – due to differences in standards and competition – the customs union reform should take into consideration more equal terms.

He also noted that “EU double standards” would not be acceptable and that figures spoke for themselves when comparing Turkish and German public procurement figures, in terms of who has the highest market access.

Expert views on sectors covered by the reform

Since then, as a result of turmoil in Syria, Iraq and Ukraine, Turkey has become even more reliant on EU trade. In turn, Europe needs Turkey as an economic anchor, both for its own growth figures and to foster a stronger geo-economic bond. 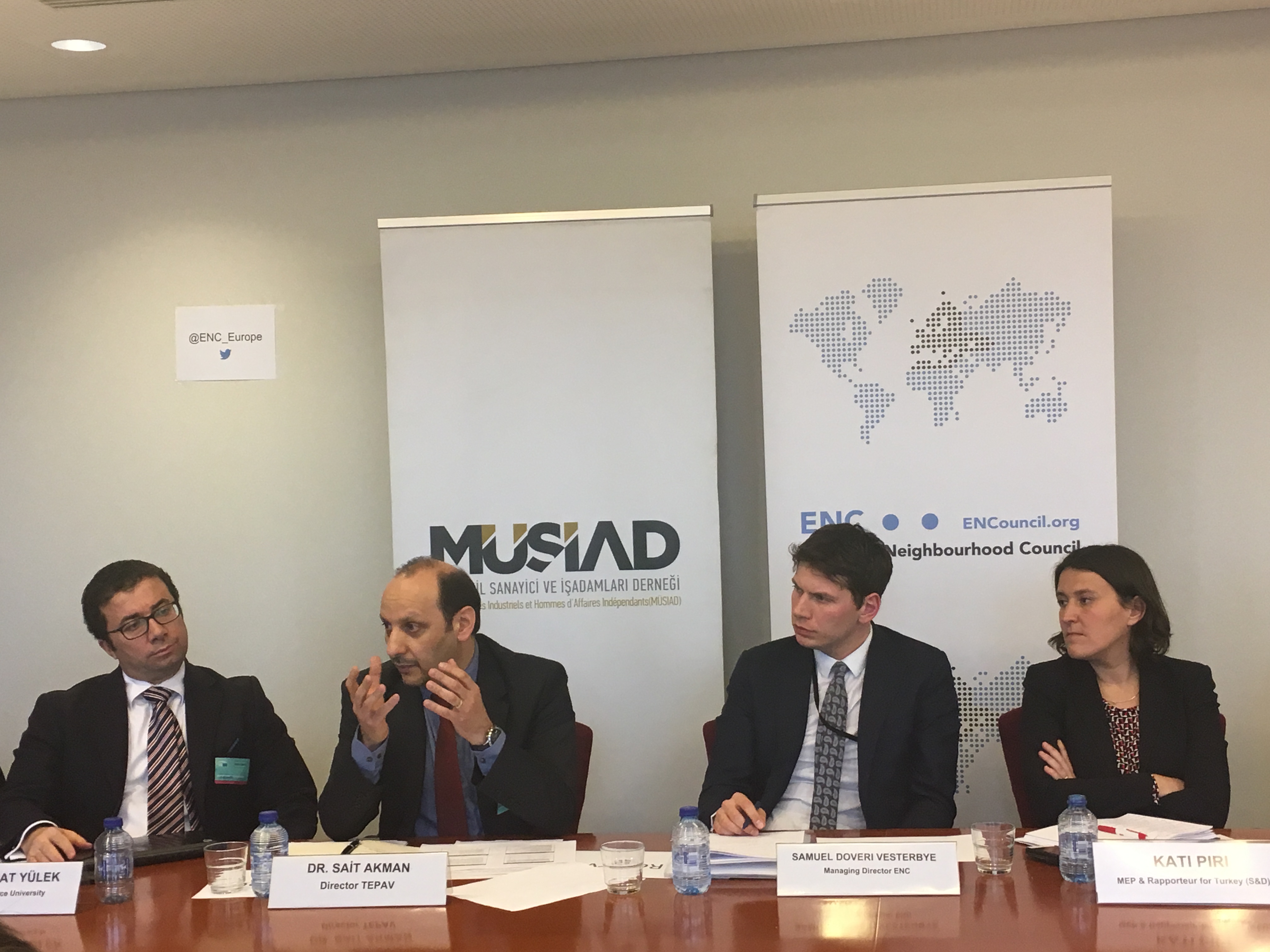 The primary reasons to support customs union reform – put forward by Dr. Akman – include the need to tackle new changes in world trade patterns, counter the negative effects of FTA’s on Turkey, increase trade and growth by including new and more mature economic sectors like public procurement, agriculture and services. It would also help avoid exclusionary measures between Turkey and the EU on economic interaction, with the example of TTIP and other free trade agreement being important.

In terms of welfare effects, the OECD’ data and IFO Center for International Economics determined in 2016 that the effect on Turkish welfare would be positive by 1.84% if Turkey moves towards a full Customs Union reform, whereas the negative percentage is estimated at -0.81% in the eventual case that Turkey settles for a typical free trade agreement with the EU.

While analysing the various sectors, Dr. Akman noted that cereals, meat and dairy were expected to face certain competitive difficulties that necessitate technical assistance and financial compensation from the EU.

Overall, benefits to the consumer will include price decreases and productivity increases, while vehicles, electrical equipment, textile, footwear, food sectors, fruit and vegetables, nuts, construction, transportation, tourism; financial services and recreational services are estimated to profit greatly from the reform.

As on-going EU-Turkey negotiations remain behind closed doors, many questions remain open about which type of trade deal we can expect to see in the upcoming three years.

In order to facilitate better inter-institutional coordination between the European Parliament; the European Commission; the Turkish and European private sectors, ENC will continue to closely monitor progress, engage with experts, economists and the various institutions involved.

The results will include a short roundtable resume, which brings together the speakers detailed views and data to contextualise the customs union reform. It will be published online in PDF format on Monday the 6th of February.

ENC will thereafter conduct research about the customs union reform process, which will be published before the Parliamentary resolution on Turkey in April 2017.

The goal of the report will be to outline the various perspectives on customs union reform in more detail, covering both the public and private sectors’ perspectives across Turkey and the EU, as well as a chapter on economic and political analysis; recommendations and what to expect in terms of negotiation and institutional timelines.