The purpose of the roundtable was the presentation of the research done by the Centre for Global Studies “Strategy XXI”  on how Ukraine, NATO and the EU can cooperate in order to counter hybrid threats in the cyber sphere and disinformation. This project was launched together with ENC and was initially discussed during a two-day high level conference in Kyiv, supported by NATO Information and Documentation Centre (NIDC).

The event was divided into two panels. The first discussion panel focused on information security in the EU, EaP, NATO and Ukraine and featured comments by Serhii Saienko, Acting Director-General of the EU ad NATO Directorate General, Ministry of Foreign Affairs of Ukraine, Oleksandr Gain, Representative of the Strategic Communications Coordination and Monitoring Office of the Ministry of Defence of Ukraine, Dmytro Dubov, Head of Department of information security and information society development at the National Institute for Strategic Studies in Ukraine, Samuel Doveri Vesterbye, ENC Managing Director, Veronika Spalkova, Manager of the European Values think tank in Czech Republic and Ruslan Deynychenko, Executive Director of StopFake.  The panel, which was moderated by Vitalii Martyniuk, Executive Director and Head of International Programmes at the Centre for Global Studies “Strategy XXI”, portrayed the main challenges coming from Kremlin’s propaganda and highlighted the importance of information security in the era of hybrid warfare as well as the need for cooperation among  EU, NATO, Ukraine and other EaP countries in order to address common threats.

Samuel Doveri Vesterbye, who presented findings from an ENC quantitative study during which several ENC academic council members participated, specifically focused in his presentation on the role of education, the need for trainings on media literacy, sources literacy and EU literacy as early preventing mechanism against disinformation.

The second panel, which was focused on the EU-NATO cooperation with Ukraine and other EaP countries for countering cyber threats, featured comments by Oleksandra Shandra, Managing Director at Euromaidan Press, Kakha Gogolashvili, ENC external advisor and Director of the European Studies at the Georgian Foundation for Strategic and International Studies, Kiril Milev, Senior Adviser on Cybercrime of the EU Advisory Mission to Ukraine and Evgen Dokukin, member of the Ukrainian Cyber Forces. During the discussion which was moderated by Andreas Marazis, ENC Head of Research for Eastern Europe and Central Asia it was highlighted the cyber security and strategic communications are interlinked. Successful cyber campaigns fuel disinformation campaigns which create distrust and cracks within the society towards elected governments. 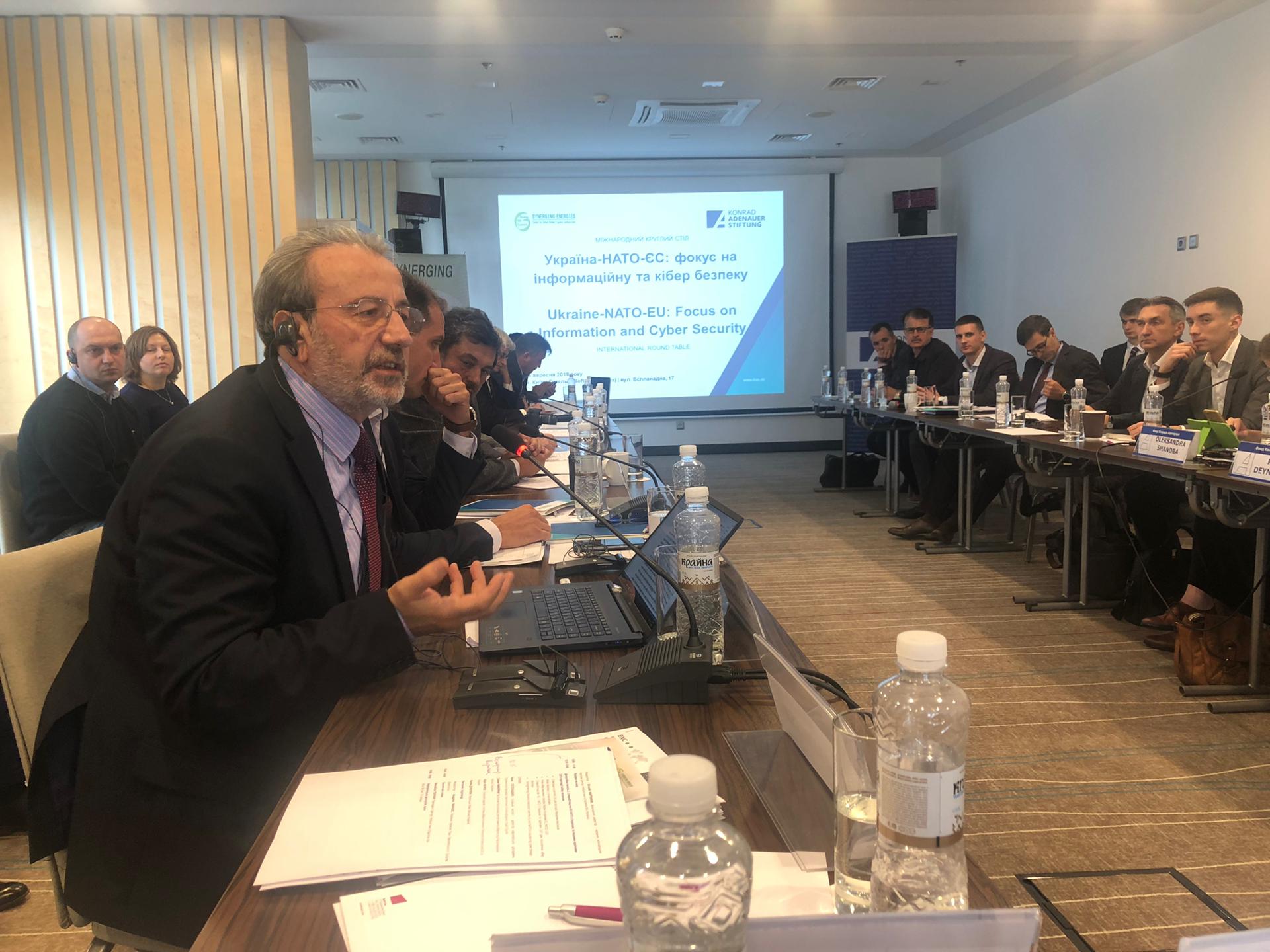 Kakha Gogolashvili highlighted in his remarks that the EU only recently has moved towards enhancing its cyber security capabilities. Instruments are developing, information sharing is ongoing, trust is built. We (EaP partners) should not be hasty in requesting more at this stage, but this means that when an opportunity arises – like in the case of EU-NATO Enhanced Cooperation – Ukraine as well as other partnes should be ready with concrete proposals. Ukraine might not have started as a pilot country, but the research community must identify the areas in which cooperation can flourish.

Despite the fact that Ukraine is following closely EU’s and NATO’s footsteps in terms of adopting similar terminoly in its strategic documents, or establishing institutions similar to the European ones, e.g. Cyber Emergency Response Team EU (CERT-EU) and CERT-UA. It is not only about institutions or updating the legal framework, it is also about inter-institutional cooperation and trust in terms of sharing information. At the EU level the Network and Information Security (NIS) Directive entered into force in August 2016 but the harmonisation of legislation in each member state has not been completed yet. Hungary, Bulgaria, Belgium and Luxembourg have not completed the transposition.

ENC, in close collaboration with our local partners and our academic council members will continue promoting educational initiatives and trainings for civil society representatives as well as journalists on media literacy, EU literacy and the need for more fellowship programmes in which Ukrainias will have the chance to interact with their peers in Brussels and other major EU capitals and learn from each other on how to better tackle disinformation and cyber campaigns.

The publication on Cyber Security is available in PDF format below